There is a new project underway in the Ecclesiastical Sewing Workroom. Well, that is not quite true. There are multiple new projects in the works. Some days it seems like there is an endless stream of projects in various stages of completion. Yet we try to remain focused and work on collections that are tasteful and elegant. If you are a fan on Facebook, have “Liked” us on Facebook and follow along, you have most likely seen a number of our new projects that have been in the works for the past 3 to 4 months.

Today, we are changing pace and looking at what was (and is) once considered a “luxury” fabric – SILK!  And not just any silk, but Silk Dupioni. Silk dupioni is a fabric that has a bit of body to it. In looking at it for the first time, it is noticeable that the fabric often has little “slubs” or “bumps” all over the surface. The fabric also has a natural sheen which is characteristic of silk fibers. 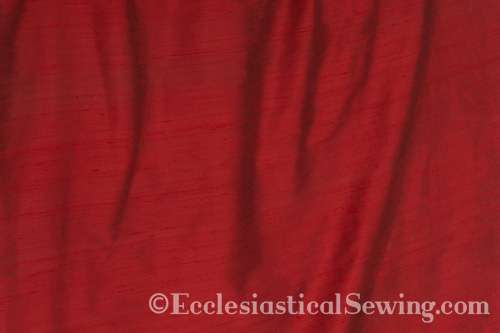 Another characteristic that is frequently found with Silk dupioni is the combining of different thread or yarn colors for the warp and weft during the weaving process. By combining different colored yarns or fibers when weaving, the fabric takes on an iridescent look. In some lights, the silk may look black while in other light it may look red.

Do you see that in the above photo how the silk lining on the chalice veil has that lovely red/black iridescent look? By using fabrics with strong contrasts, the light picks up the colors in different ways, which may help with visibility of vestments. Most vestments are viewed from a distance, and things that are too dull, or plain, or things that lack contrasts often get lost and are not visible from more than a few feet away. Now, this is not an excuse for excess, but rather careful and thoughtful consideration that helps the vestments to be seen from a distance.

Keeping all of these things in mind, the new Saint Thomas Vestment Collection will begin with Red and Gold Pugin Orphrey Bands.

The Pugin orphrey band is about 3 inches wide. It would be fine to stand alone, but it benefits with the addition of a silk dupioni as a base to enhance the trim without overpowering the beauty of the orphrey. The silk orphrey bands can be cut to different widths, depending on the type of vestment it is applied to. The above orphrey band will be sewn in narrowest width for this collection.

The widest orphrey band in the collection is used on the chasuble. Each orphrey band is created to balance the vestment it is being used on.

St. Margaret Ivory Lurex Brocade is the base fabric for this collection. The use of an ivory/gold combination with the Red and Gold orphrey band is lovely.

There are many different ways to create an orphrey band. I prefer to create the orphrey with the trim and then apply the orphrey to the final item.  I find it helps eliminate some to the problems which are prone to happen.  If the silk and Pugin were stitched directly to the brocade and then the trim was added, and then the trim stitched on, there resulting project would tend to pucker and, well, a mess.  At this point, some may say to use things like spray adhesive to eliminate the possibility of puckers and wrinkles. I not a fan of these methods. I prefer a more traditional approach of basting and then stitching by machine.

At this point, some may say to use things like spray adhesive to eliminate the possibility of puckers and wrinkles. I not a fan of these methods. I prefer a more traditional approach of basting first. Why some might ask? These fabrics and trims are expensive. The spray may leave residue behind that might cause issues with the fabric in the long term. In classes that I have taken with the Royal School of Needlework, they discourage the use of spray adhesives because it is not known how they will affect the fabrics long term. Their concern is that the sprays create a sticky residue on the back of the fabric which will cause it to break down or deteriorate before its time. Their recommendation is to avoid using spray adhesives on items you wish to have last.

The finished orphrey band is edged with a red and gold galloon trim. It is a nice compliment to the Ivory/Lurex St. Margaret brocade.

The finished Burse and Chalice veil look well in many church setting. The collection may also be sewn with a green/gold orphrey, Violet, Gold and even a rose orphrey which covers many seasons of the church year.

For those looking for a set that might be a more solid looking combination instead of the brocade, there is also the Saint Ignatius of Antioch Chasuble and stole made with silk dupioni. As always, be sure to continue to follow along for updates on new projects, patterns, and embroidery designs to use for your next church vestment project.