The One with the Forget-Me-Nots 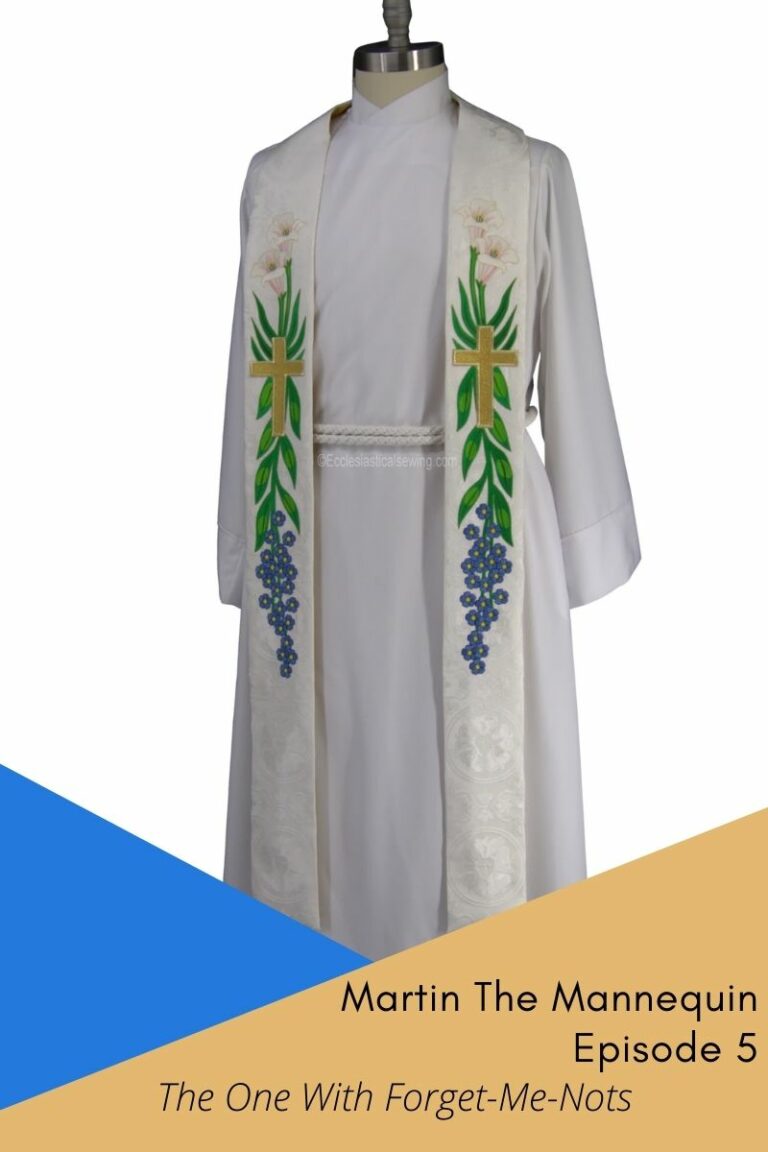 First came the February snowstorm, and shortly on its heels, Travis came down with a cough. From my nook in the back room near the photo booth, I’d watched as the machines stood idle. It was a relief to my ear. But the worry of the Ecclesiastical Sewing family was tangible. While it wasn’t Covid—some virus susceptible to humans but not mannequins—Travis couldn’t be coughing because of his bad neck.
When Carrie left the third night of Travis’s absence, Tim was already working on some fabric orders that needed to be cut and packed. 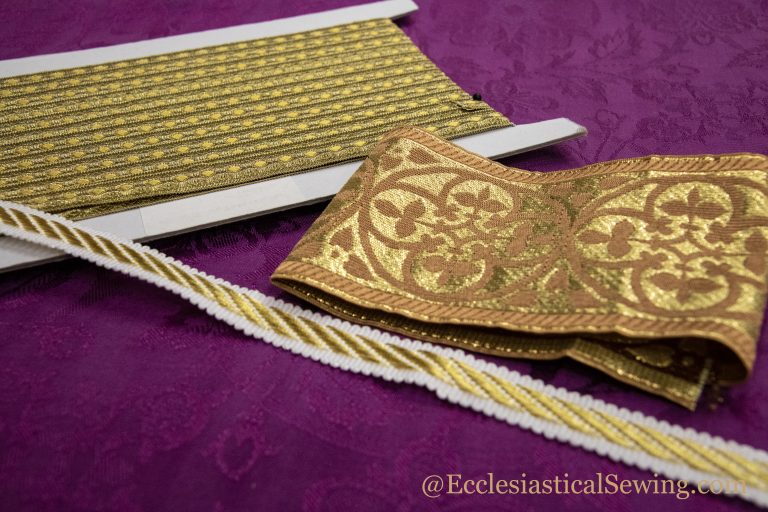 “It sure is quiet in here with the son-in-law out of commission,” I chirped as I made my way to the snack fridge. Carrie didn’t make much noise, unless she dropped something.
The truth was, even though I had a house elf to talk to when the humans left, it was still painfully boring at the sewing studio. There hadn’t been a single reply to my transfer inquiries. And while I made sure to work out, it was blistering cold as the month of March approached.
“When you get done eating those hard-boiled eggs, I’m going to need your help sewing the back seams of those stoles,” Tim said, standing over the bolt of fabric he was about to cut, scissors held high.
I swallowed hard. “Look, in the department stores, there was work we mannequins did to prepare for the work days. Changing looks, adjusting garments on wracks—it’s stuff I’m good at. But sewing? That’s not something I’ve ever done.”
“But you’ve been muttering about how boring it is here in northern Minnesota. I’m offering you something to occupy your time with.”
I rolled my eyes, cleaned my hands, and approached the work tables. “It wouldn’t be so bad if there was more excitement.”
“Like?” Tim dropped the bolt of fabric, drug it to the shelf, and proceeded to hoist it into the proper place with the other brocades. For a little guy, who stood thigh high next to a human, Tim was strong and athletic.
“Well, I miss the departmental rivalries and parties. But here—until I met you—I was alone.”
“I see.” The elf came around the table and gestured to the stoles. “1/2 inch seam along the center back, if you would please.”I nodded and gingerly took the pin riddled stole.
“If it’s drama you want,” Tim added, “there’s plenty of small town happenings. I tend to stay clear of it, my ma raised me to be a hard worker. But it’s here.”
Sure there is. I let the white fabric slip through my fingers. This was an Easter stole that I was helping to sew. The white lilies and blue forget-me-nots held symbolic meaning. The dainty blue flowers asked the viewer not to forget God’s promises, while the white bursting blooms proclaimed the resurrection. They were attached to a bed of greens and a cross adorned the center of the stole.
“Look at that finished product!” Tim held up a finished stole. “If you could sew one of these from start to finish, you’d feel a sense of pride in your work. But I do appreciate the help, even if it is a simple back seam.” 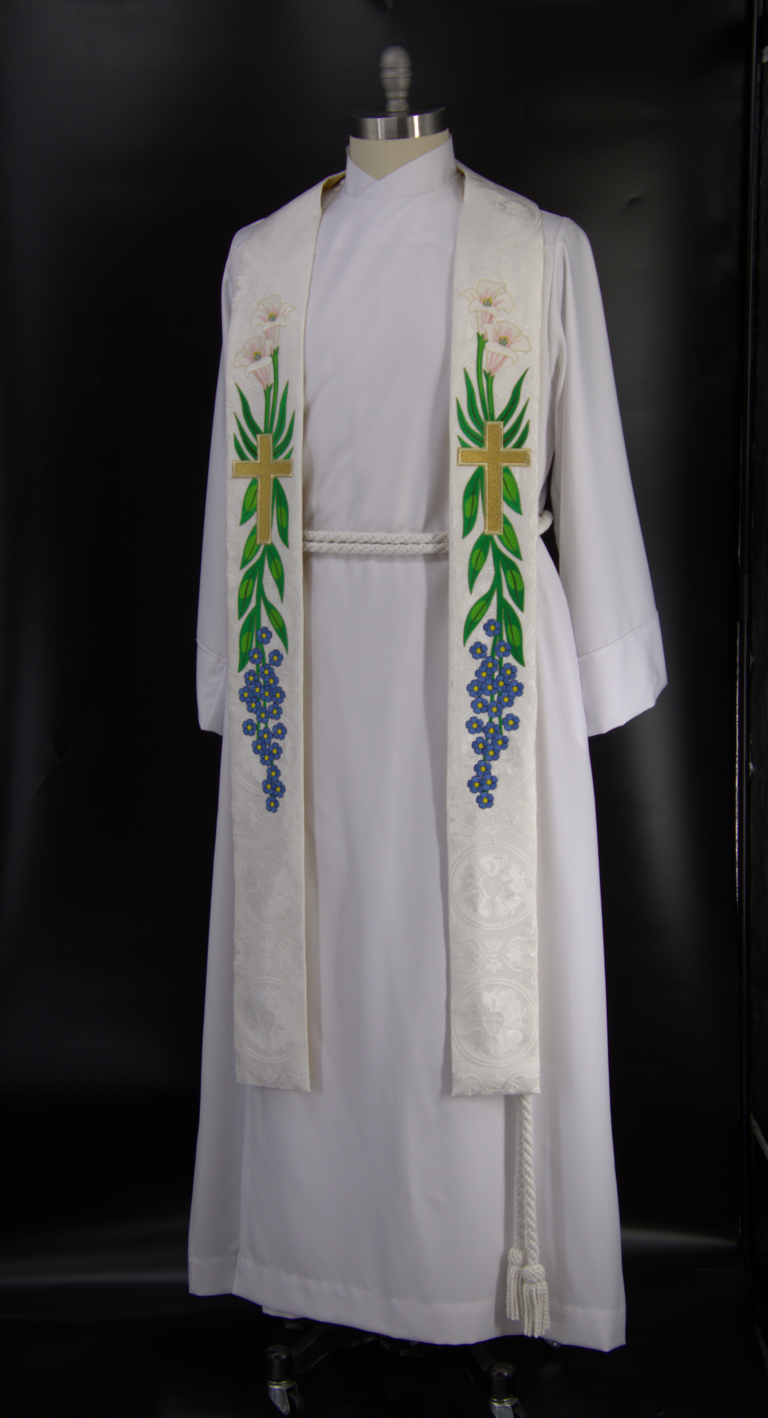 “You’re welcome.” I looked at the clean seam. Not bad.
“That’s the last Easter stole, but we should get a jump on ordination and Pentecost—red items.” Tim paged through Carrie’s notebooks. “Travis couldn’t have picked a better time to get sick—not that he did, of course. But in a few weeks, come mid-March, we’ll be so busy! Got to stay a season ahead.”

“I’m going to go for a walk.” I rose from the sewing machine before Tim talked me into trying a more complicated item.
Tim hummed in acknowledgement, and I slipped out the front door. The negative temperatures made a moonlit stroll difficult, but I needed to clear my head. Staying positive was difficult when all I wanted to do was leave.
The ladies at Arbor Boutique were busy. The mannequins were bustling about, setting the store for the next day. I waved, and a few saw me through the window. They opened the door and called out greetings.
“I just wanted to see how Nightingale was doing after her snow storm adventure,” I said, trying not to be obvious as I searched for one mannequin in particular.
Kathy didn’t appear, however.
“We have a message for Tim, if you wouldn’t mind telling him?” one of the other lady mannequins asked.
“Sure,” I agreed.
“Tell him that Tom and Sweep have some new menu items they’d like feedback on.”
I looked at the mannequin in confusion, but when she didn’t offer an explanation, I merely said, “Sure thing.”
“He doesn’t know who Tom and Sweep are,” Kathy said, appearing from the back. “Hi again, Martin.”
“Hi Kathy!” I held up a hand in greeting, happy to see her.
“Tom and Sweep are the brownies who work at Boulder—the restaurant on the north end of your building.
I nodded in understanding. I’d not yet been over there, but the smells that came out of the building were rich and savory. Eating only cold foods and prepackaged snacks wasn’t as satisfying and my mouth watered just thinking about the restaurant. Brownies, a small variety of fae, were extraordinary helpers in domestic settings.
“So the supernatural community is actually prevalent in the Brainerd Lakes?” I mused, this new information mixing with what Tim had told me about local drama. There actually might be ‘happenings’ here after all….
“There sure is. Well, it was good to see you again, Martin. We’ve got to get back to work,” Kathy said, dismissing me with a smile. Such a sweet smile. I nodded and called out my goodbyes.
Walking around the length of the three joined parking lots, I mulled over the information. And when I returned to the sewing studio, I was in a much better mood. “Can I help you lift those bolts of canvas fabric?” I asked Tim.
The house elf, surprised at my generous offer and clear change of mood, smiled broadly up at me. “I would like that. It’s good work for your arms too. No need to swing the weighted balls when there are heavy bolts of material.”
I chuckled in agreement, knowing I’d still swing the kettle-bell before going to bed.
“Tom and Sweep have new menu items they want tried,” I relayed the message as I lifted fabric.
“Oh, that would be nice,” Tim agreed. “Maybe when we’re done we can pop over there.” 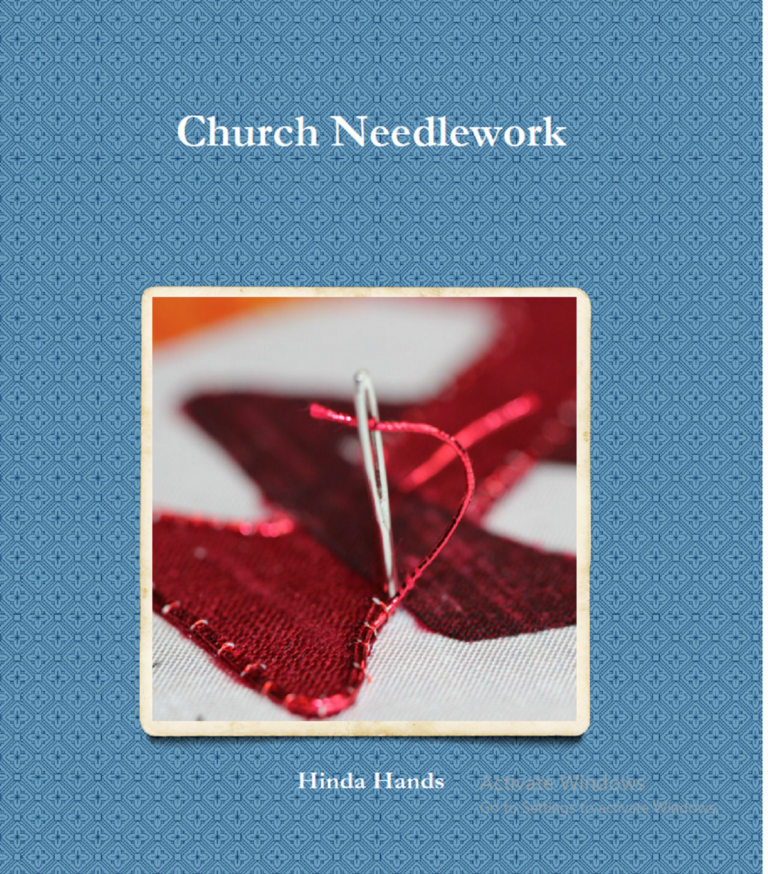 Going to fetch the largest roll of canvas on the floor, I walked past the center book shelf that held the spare patterns for sewing vestments. It couldn’t be that hard to learn to sew them, could it?

THANK YOU FOR READING. FOR MORE OF MARTIN’S ADVENTURES, STAY TUNED!
***
It is a truth universally acknowledged, that after a shop closes for the night, the mannequins comes to life. And if one only knows how to watch, their antics can be seen and thus recorded.
Note from Ecclesiastical Sewing: This is a work of fiction. While places and events might have some link to real life, this is intended as a humorous piece for entertainment.
Meet Martin the Mannequin! After being purchased from a fashion gallery, Martin was unwittingly shipped to Northern Minnesota to be used at Ecclesiastical Sewing as a fashion form to try on vestments. Not a fan of the cold nor the ‘small town vibes’ Martin struggles to adapt to his new job as fashion form for the sewing studio. Read along to catch the latest adventure!
Soli Deo Gloria.