For those who are new to Ecclesiastical Sewing,  or for those who stop by once in a while, you may have heard us talking about pastoral stole kits. Andy you ay be saying to yourself, “What in the world is a Pastoral Stole Kit?”  We struggled to find the right name for our product. We thought about calling it a “Pastoral Stole bundle” or a “Pastoral Stole long, skinny quarter (as opposed to a quilter’s fat quarter). There is the “pre-cut fabric for making a single pastor’s stole,”  which sounds rather long.  But none of the names quite fit the product. So what do we call these mini collections of fabrics pre-cut and ready for someone to purchase and make a lovely liturgical stole?  Well, let’s find out what is in a Pastoral Stole Making Kit is and then maybe you can help us come up with a better name. 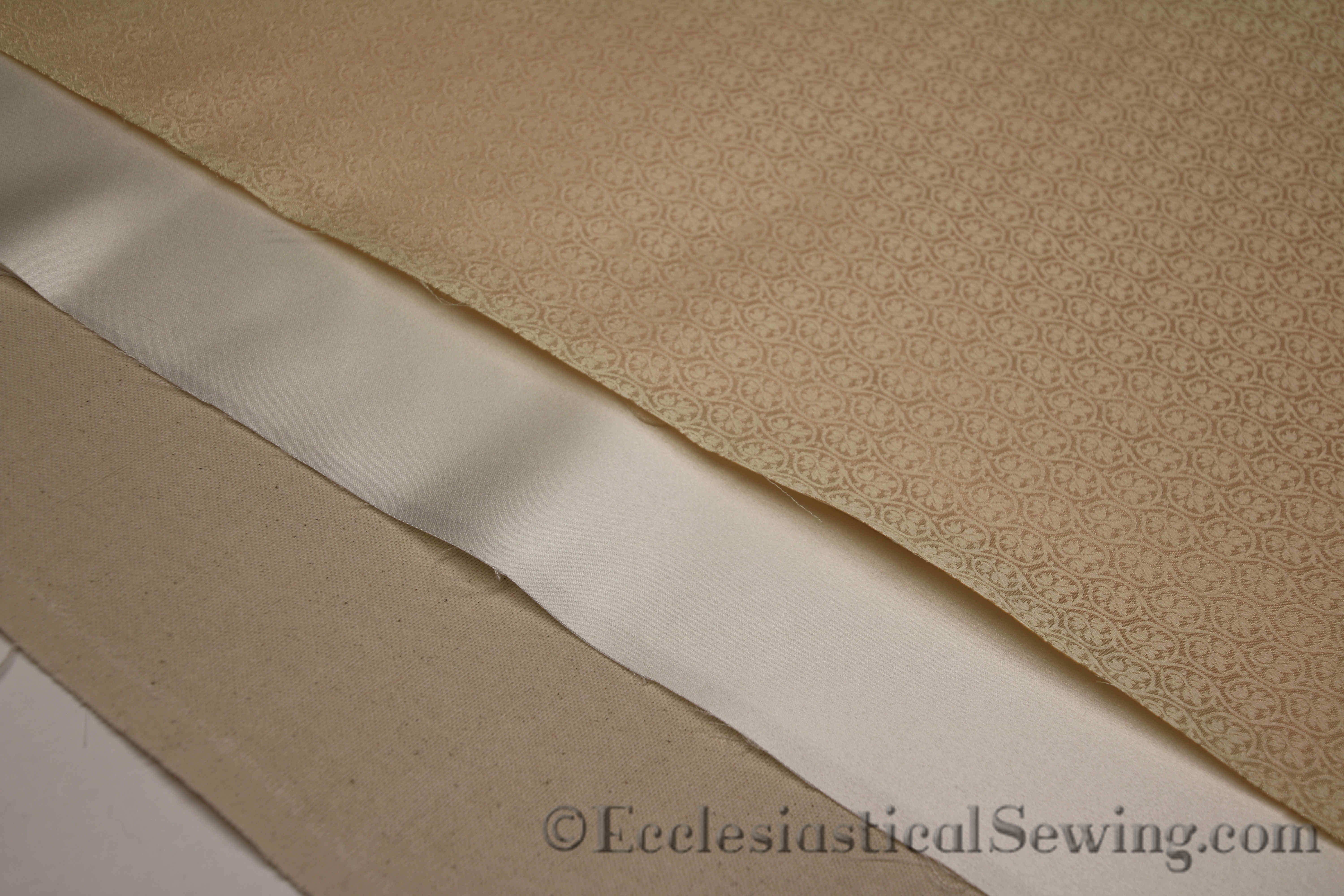 The above photo is an example of what is included in a Pastoral Stole Making Kit. It includes a pre-cut piece of fabric that is large enough to cut one pastoral stole.  It is also enough fabric to cut and make a deacon’s stole. A lining fabric and cotton canvas, which is used as an interfacing, is also included in the Pastoral Stole Making Kit.  The Face fabric is available in a wide variety of fabrics which are included in our line of Liturgical Brocade Fabrics, silk, tapestry, and metallic brocade fabrics. 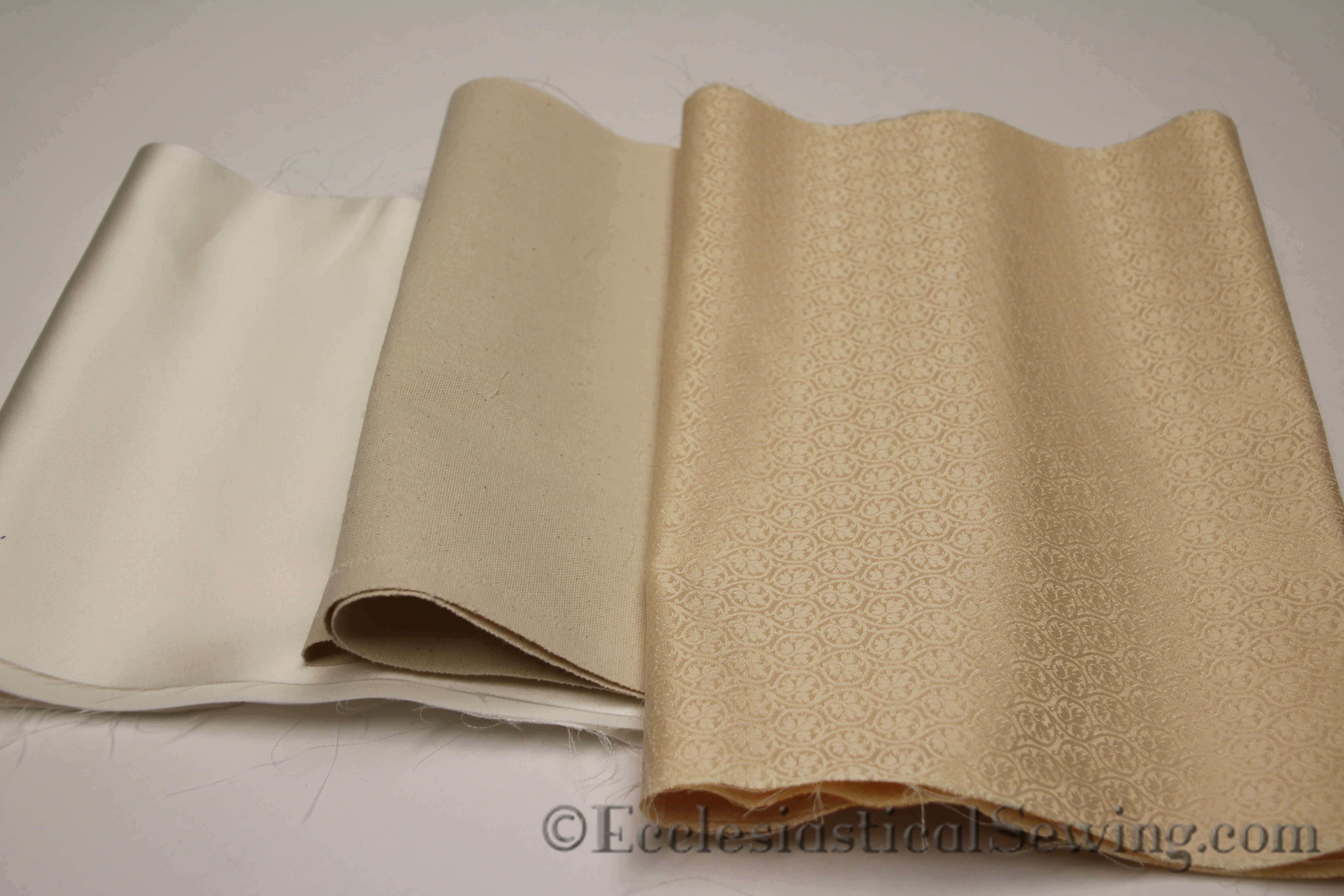 Ivory York Liturgical Brocade, a subtle, but lovely fabric, is featured in this photo. The cotton is used as an interfacing for pastoral stoles. One could also use hair canvas such as that used in tailoring, but it is often difficult to locate, and can be expensive. Canvas that is 100% Cotton in a medium to heavy weight is my favorite interfacing of choice for providing needed body, weight and stability to a pastoral stole. Satin lining is included with all stole kits, and is in a matching or contrasting color. 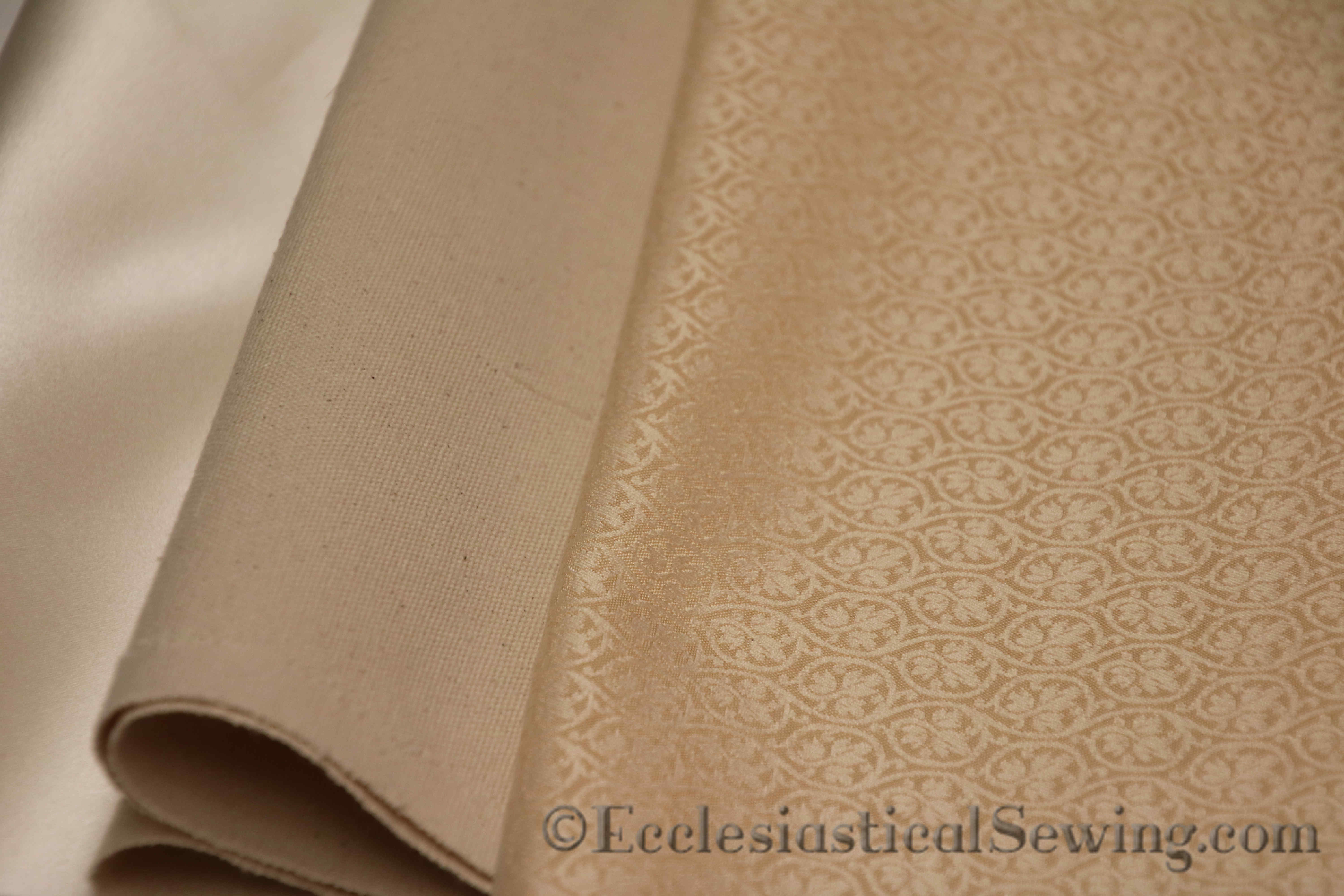 York brocade is a liturgical fabric that is often overlooked, or passed by in favor of selecting a larger, more prominent pattern. But York is a lovely fabric deserving attention for its own merits. Notice the tiny scale of the design in York Brocade. It is pleasant to look at, and allows for many possibilities when it comes to design. The color is a rich Ivory that makes it very useful, too. Along with the ivory, York comes in an Ivory/Gold color combination. A Pastoral stole kits contain three types of fabrics as shown in the photo above. So, then, what is next? 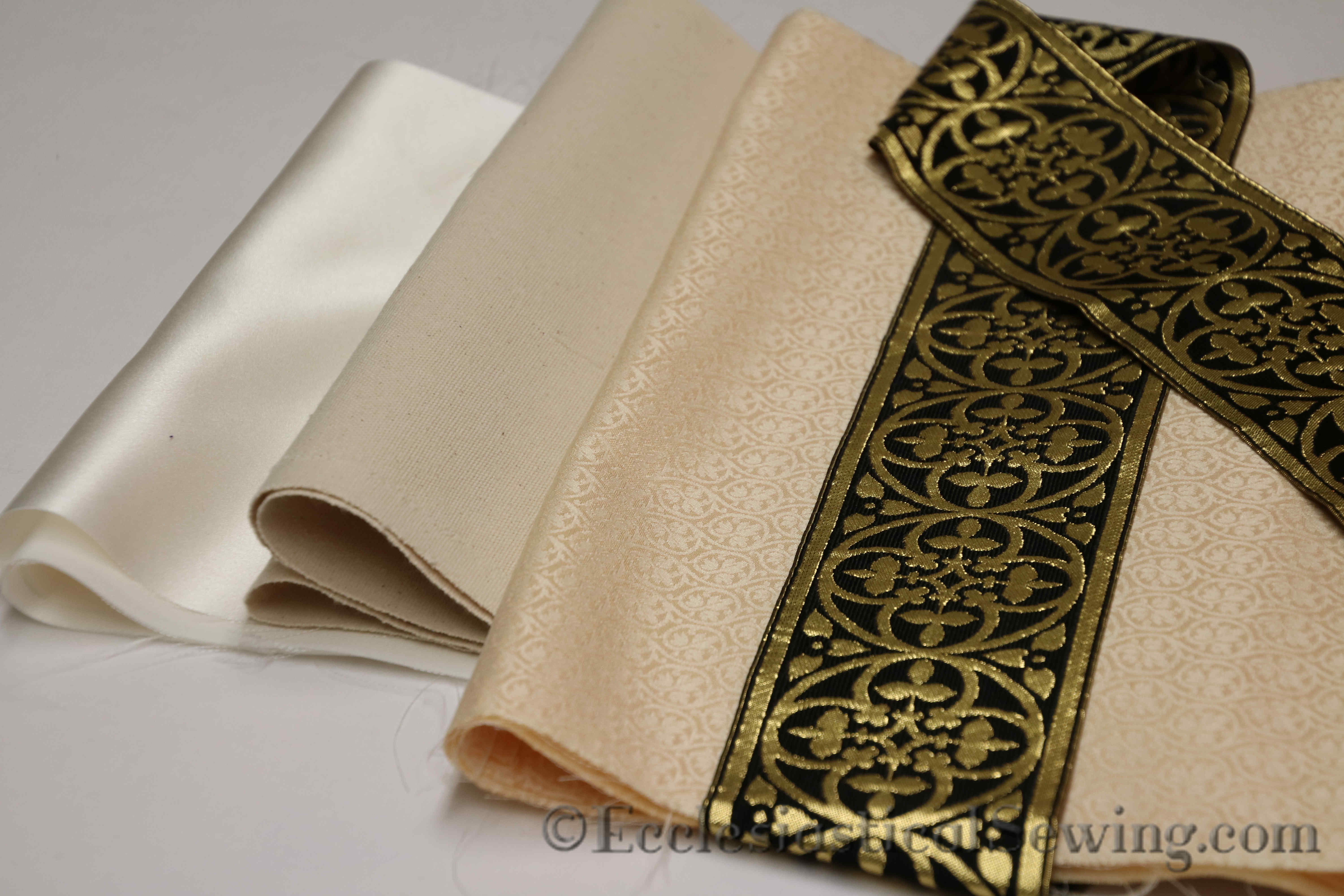 If a priest or pastor is in need of a white stole that needs to work with vestments that a church already has, York might be a good candidate. Likewise, for a seminarian taking a first call who will need their own stoles, York Brocade is sure to blend in and work with many existing white church vestment sets. So what might work as a design option with York Brocade and what does one need to do to finish a stole kit?

To make a Pastoral Stole from a stole kit, one needs to have a stole pattern, and a few notion and trim items are helpful to give a finishing touch. While some liturgical brocade fabrics can stand on their own without any trim, York brocade would be a bit plain without adding something for interest.  My favorite, and the easiest design option for York Brocade, is to select the 3″ wide St. Dominic orphrey band.  BUY IT NOW St. Dominic is a gold metallic orphrey that comes in a variety of colors. The photo above  and below shows the black St. Dominic Orphrey with the York Brocade. This color combination works well because of the strong contrasts in color. The stole could be easily trimmed with a single row of the St. Dominic orphrey sewn near the hem, or a double row could be sewn at the hemline. A single row of trim could also be placed at the chest. The lower edge could be left plain, of tassels could be added. 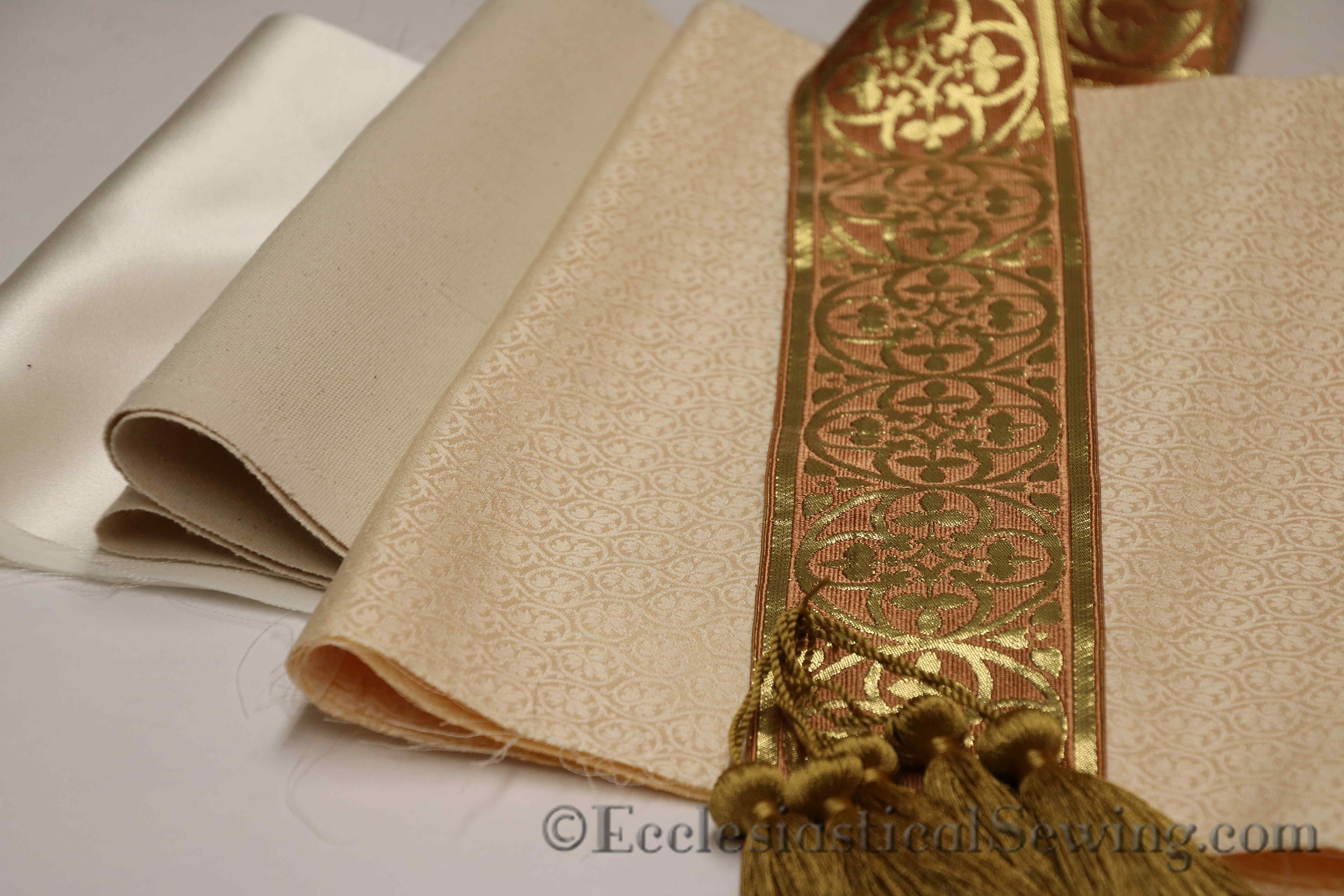 For a more subdued look, the Gold St. Dominic would also work as an orphrey band on the York Brocade. 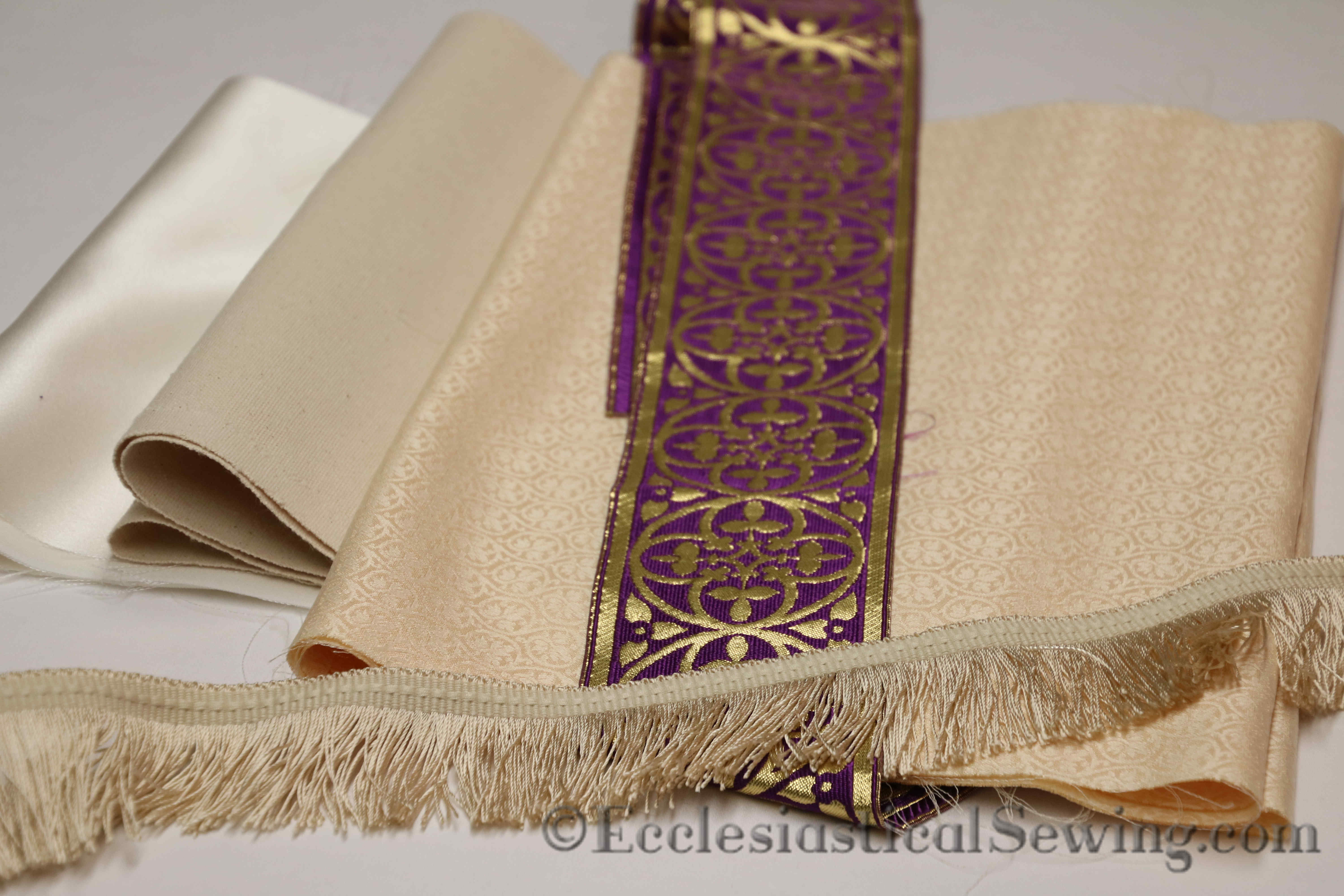 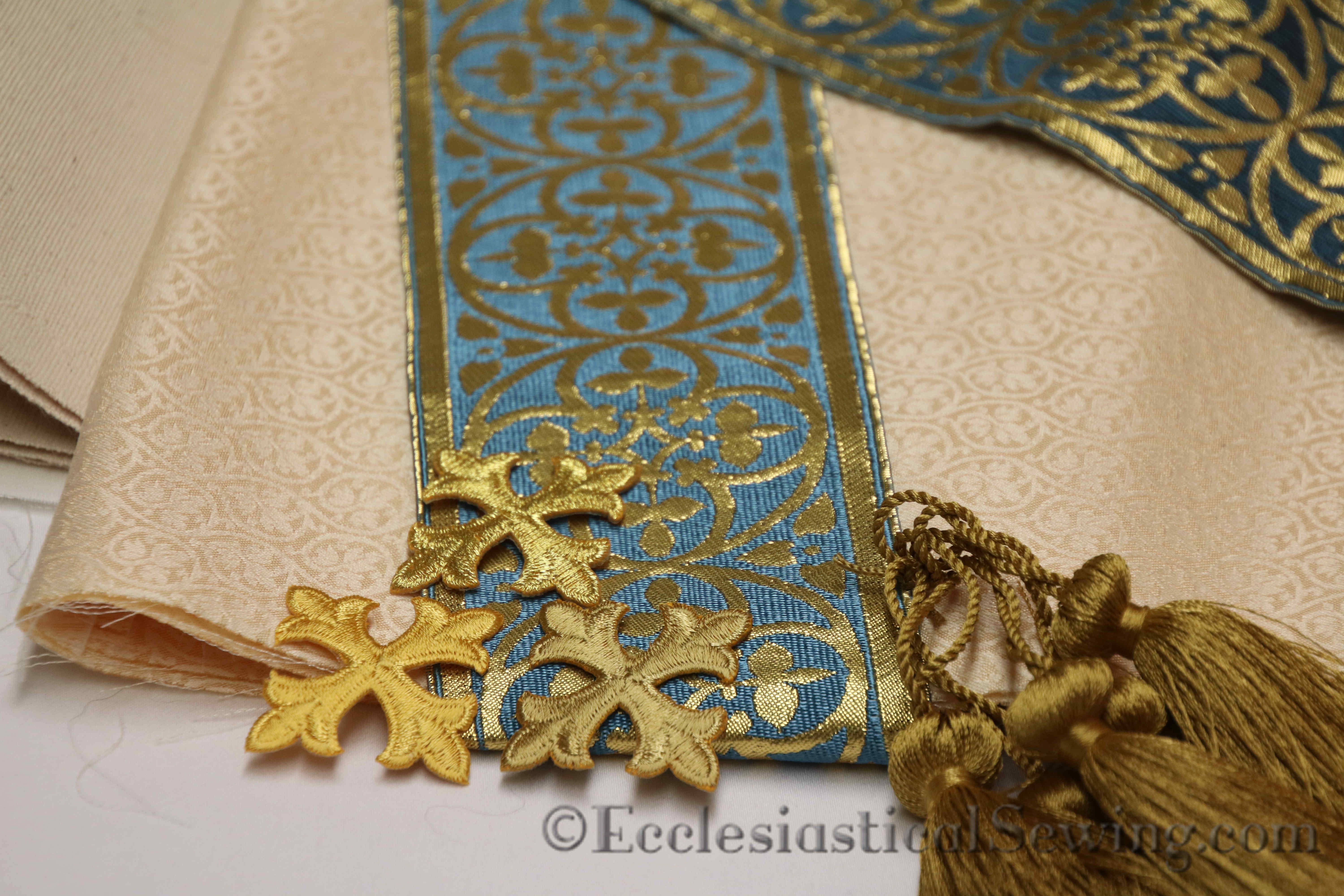 While there are not photos of every color of the St. Dominic on the Ivory York in this post, there was one more that seemed worthy of attention. It is the Blue St. Dominic on the ivory York Brocade. The Blue is a lovely soft blue. The gold tassels work well, as would a gold fringe. The tiny iron on crosses are suitable for use at the back neckline of the stole and they will be available shortly on through our store front.

And there you have it. The fabric included in a Pastoral stole kit and options that are suitable for use as trim. But now, a pastoral stole pattern is needed.

And as part of our Grand Opening Celebration for the new Ecclesiastical Sewing Store Front, we are offering a Free 4 1/2″ wide Pastoral Stole Pattern  with the purchase of any pastoral stole kit. This offer is good through December 31, 2016. To receive your free 4 1/2″ pastoral stole pattern,  you will need to leave a comment in the note section of the order to “include free stole pattern.”  So, if you have ever thought about making a pastoral stole, and wondered if you could do it, here is your chance to get a great stole pattern for free with the purchase of a Pastoral Stole Kit Fabric. And now, how about that name? Have you thought of something better? Leave your comments and suggestions below.