Years ago, while still in college, when I made my very first Church vestment – a pastoral stole. The only available Ecclesiastical Embroidery Design resource available was a vestment catalog.  It had the usual photos of church vestment pieces, which were made using the appropriate liturgical colors and designs for the various seasons of the church year.  The church vestment catalog provided some design ideas, but it was trial and error to create the Ecclesiastical Designs or Symbols which were finally used on the pastoral stole.  The symbols were going to combine applique and machine embroidery, so the Ecclesiastical Designs had to be rather simple.

Fast forward 20 years, and the same problem existed when I started Ecclesiastical Sewing and making Church Vestments and Altar Frontals a few years back.  The first Pulpit fall I made had an Angus Dei (The Lamb of God) as the  main design. 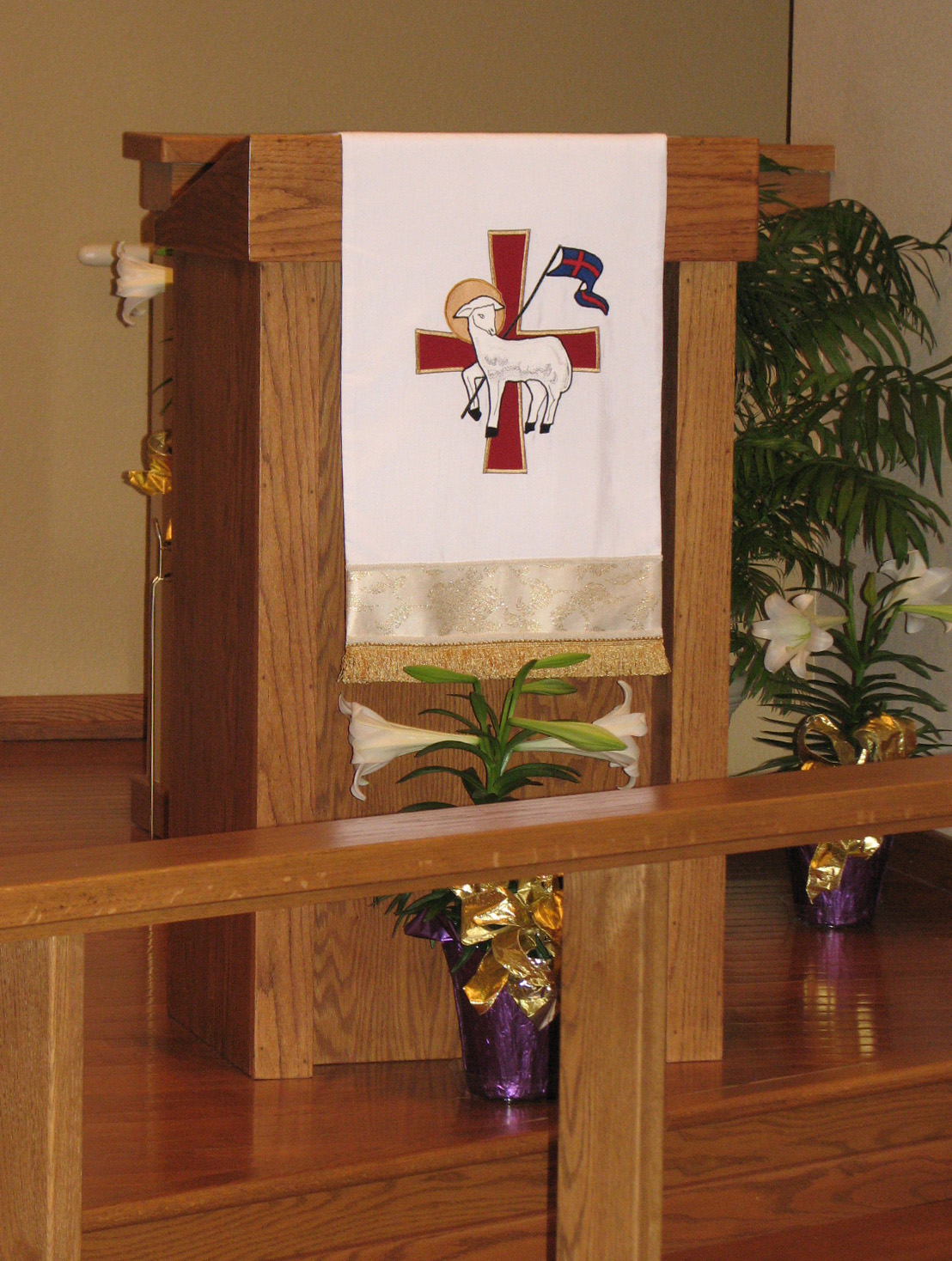 The Agnus Dei carries a banner of victory, has a nimbus (or halo) behind his head, and is carrying a banner of victory depicted with a cross.  The design for the Pulpit Fall was selected with the approval of my pastor, which is always a good idea (more about that later).  The Agnus Dei liturgical symbol is an old and familiar design that has been used for centuries to proclaim Christ’s Victory and our salvation. The Agnus Dei solved the design problem for the pulpit fall.

With time was running out, and nothing else presenting itself as an idea, that is how the design came about for that first Easter Ecclesiastical Sewing project.  Once the Easter set was completed, the hunt was on for something better.  It has taken years of work researching, scouring the internet, and old book stores, eBay, and most recently, volunteering  at a Monastery to come up with Ecclesiastical Embroidery Design ideas and Ecclesiastical Embroidery Patterns which would be an improvement over those first designs. Slowly but surely, I have developed and acquired some designs that I am looking forward to using on future projects.  Most recently, I came across some old pattern resources that are coming from France.

In the coming weeks and months, I will continue to share Church Vestment and Church Embroidery design ideas and projects.

Be sure to visit our online store front Ecclesiastical Sewing where you may shop for Liturgical Fabrics, altar linen fabrics, church vestment making patterns, liturgical machine embroidery designs,  church vestment trims and notions and so much more. You may also find us on  Ecclesiastical Sewing  on Facebook , Twitter, and Pinterest. Sing up for our mailing list  at the bottom of the page on our online store front and receive a free copy of our Small Linens Booklet as our way of saying thank you for following along