Installation of a New Pastor 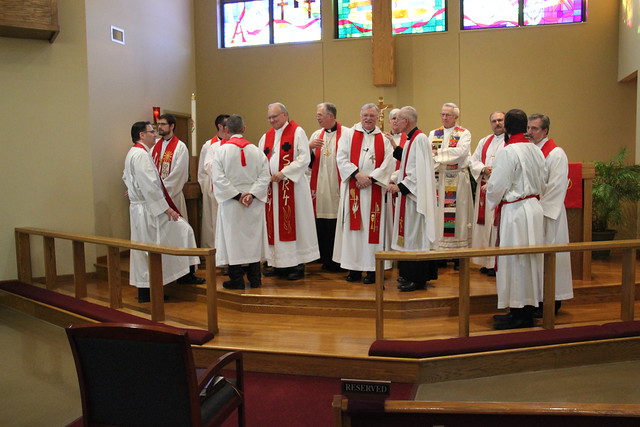 The pastors are all gathered after the installation service waiting for the official photograph to be taken.  Within the Lutheran Church – Missouri Synod, red is the traditional liturgical color to be worn for an installation service.  And look at all of the lovely red stoles! Within our church body, it is tradition for pastors within the local circuit to attend the installation service of a brother pastor. At this installation service, there were a total of seventeen pastors vested in red stoles! There is a wealth and abundance in the variety of the pastoral stoles being worn in this photo. I noted one stole worn by a retired pastor was made using the Ely Crown fabric. That stole was a little shorter that stoles made today.  If one had to guess, the stole most likely dates back to at least the 1960’s or 1970’s, and was most likely made of silk. It was worn over a black cassock/white surplice combination, and with the full, elegant cathedral sleeves. Although that look may not be seen as often today as most pastors favor the wearing of the cassock-alb, it still looked very nice.

Another stole featured a lovely v-back neckline with a large red tassel hanging from the point at the center back. The front of this stole was a tone on tone red design.  I wish I had taken a close look at this pastoral stole to see if the design had been woven, or if it had been worked in some type of counted stitch.  That will remain as a burning question to keep an eye out for a similar look in the future.

There was yet another stole which was intriguing ,as it was some type of counted stitch worked on a red woolen or similar fabric. The colors in the stitching were very bright and vivid.   The motifs were small, and worked in rows and columns.  Without a chance for taking a closer look, one wonders if it were some type of traditional embroidery work either from a Central or South American country, or the other thought was a type of Scandinavian embroidery. That stole will also be on the list for a close look if the future ever presents the opportunity. 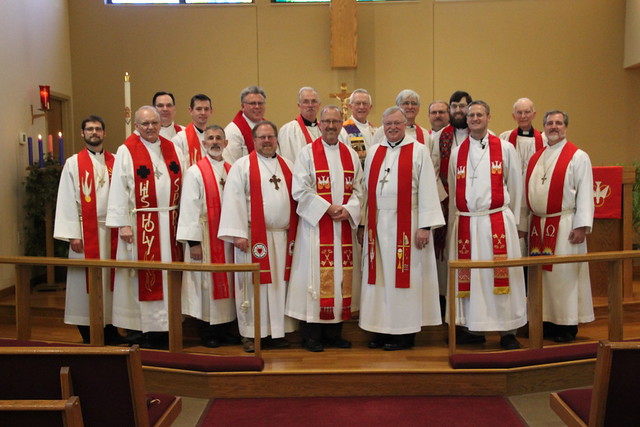 There is one stole that was made at the monastery by the Sister in O’Fallen, MO. And how, you may ask, do I know that. Thankfully, for that stole, the Pastor is a close friend, and he told me the tale behind the acquisition of his lovely red stole. That would be the second from the left in the front row. The stole has a large black cross on either side, with the words, “His Holy Spirit” in white with the flames at the bottom of the stole. The techniques for this stole are applique and machine embroidery, as well as machine couching of gold threads and soutache braid.

Although not every pastoral stole is visible in this group photo, one gets a better sense of the variety and age of the lovely vestments being worn by our pastors. There are long and short stoles, thin and wide stoles. One other interesting point to note is the variations of trims used to finish the ends of the stoles. There is the traditional use of fringe  – usually in gold, and the use of tassels on a few of the stoles. Many of the pastoral stoles have a plain lower edge, with no trim or tassels.

Within this group of pastors wearing their red vestments for installation, two of the pastoral stoles are the works of my hands.  Can you guess which ones? They have orphrey bands at the lower edge, and have descending doves along with keys representing the “Office of the Keys.” In one instance, the embroidery was stitched directly to the stole fabric prior to cutting the stole out. In the other, the embroidery was stitched to a piece of fabric which was applied to the stole as an orphrey band with galloon trim.  The center stole used a red silk dupioni fabric and Evesham in Red/Gold as the orphrey band.

Red stoles are often the first vestment a young pastor will need within the Lutheran Church  prior to their ordination and installation service.  Last spring I wrote several articles on the making of red pastoral stoles which you may find useful. If time allows this spring, I will try to offer more design and fabric ideas for the making of Pentecost and red stoles suitable for use at installation and ordination services. Until next time.

Pastoral Stoles: How Much Do They Cost