Our Saviour’s Church in Copenhagen

Today I would like to share a special guest post written by Ashley, my daughter. Ashley is currently traveling and attending school in Europe for the summer. Ashley is a graduate of Belmont University. She has a love for the Classics, history, Italian,  church history, and Ecclesiastical Art.  While she travels, she will be visiting churches throughout Copenhagen and Italy and be a contributing writer for Ecclesiastical Sewing over the coming months. And of course, she is happy to be my “eyes,” ever on the lookout for anything that might related to Church vestments as she travels through Europe this summer. I hope you enjoy Ashley’s descriptions as she relates the history of some very special places from her summer travels.

Buongiorno and happy Memorial Day. My name is Ashley. While traveling the world, it is important to make time for Church History and Ecclesiastical Art. I am currently spending my last night in Copenhagen, Denmark. I have been here over a week, and finally convinced my traveling companion to see a historic church. The only reason she agreed, however, is because we climbed the spiral to obtain a “cool” selfie with Copenhagen in the background. 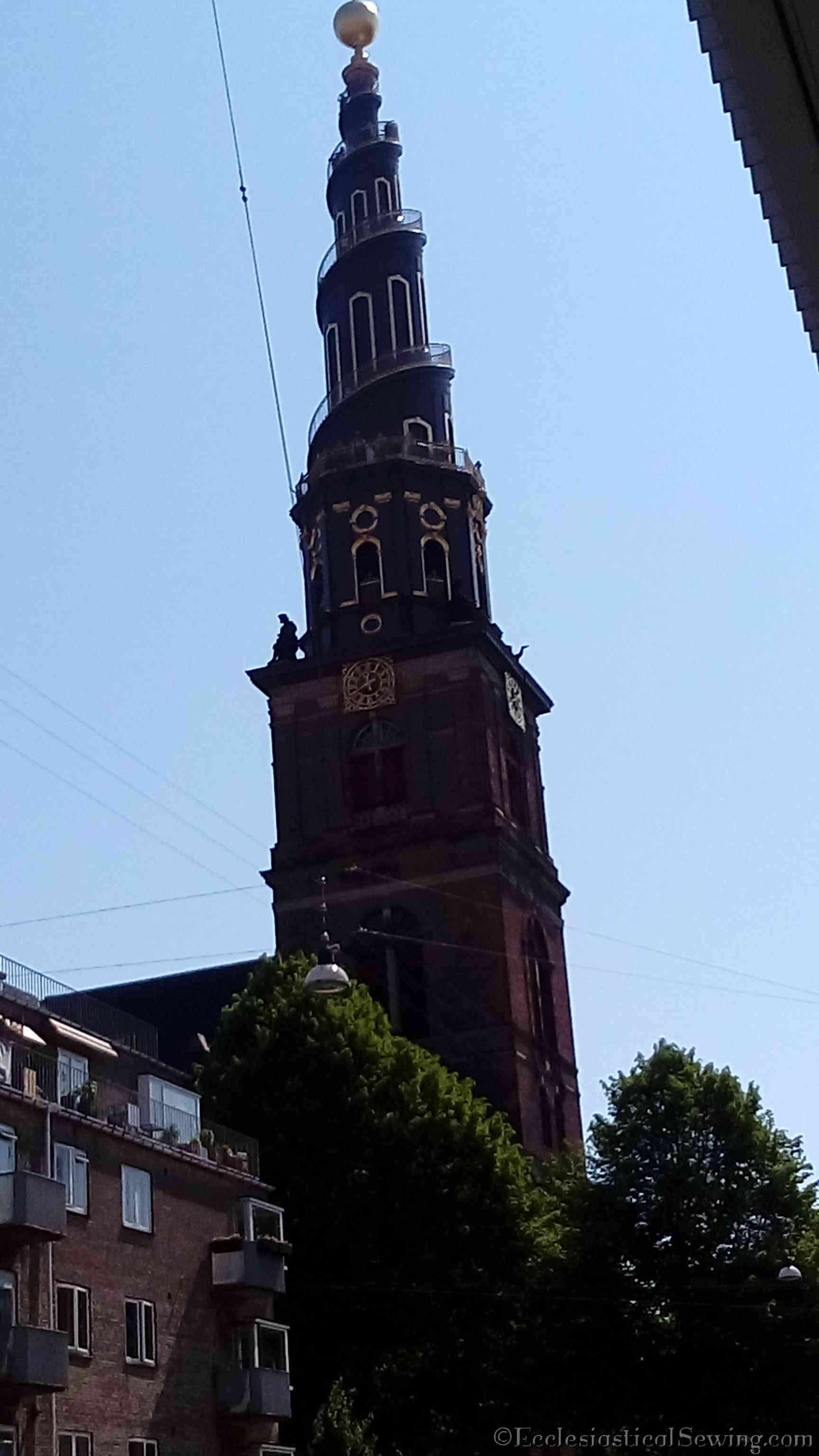 Once there, I immediately set to work studying and taking in the atmosphere of the place. Having been to many churches in Italy, I was eager to compare my first non-Italian, and for that matter non-Roman Catholic Church, to my previous experiences. There are 400 steps from the ground up; the last 150 are outside on the spiral. The bell tower below the spiral boasts of forty-eighty carillon bells. 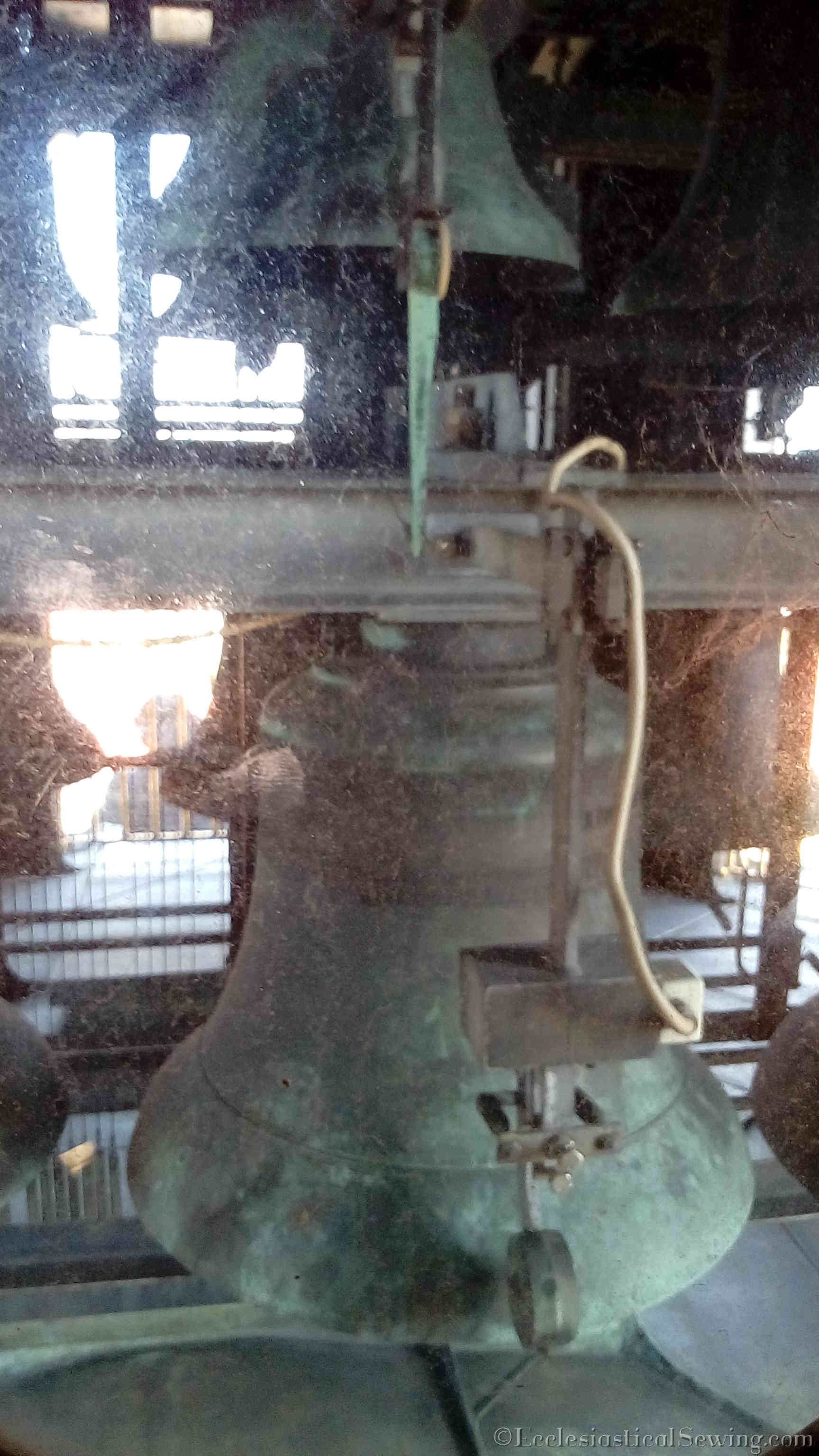 We waited in the bell tower, hoping that they would go off and make us partially deaf for the rest of the day. Nothing happened, so we continued to climb. The interior was wood and brick, very dark, and I could only imagine if it had been winter. The spiral at the top of the bell tower was constructed after the church was inaugurated and completed in 1752. Once outside at the base of the spiral, the wind was strong and I, since I would by no means consider myself a fan of heights, was not enjoying myself. Copenhagen, however, was vast and my breath was taken away by the beauty of this ocean side, canal marked city.
Our Saviour’s Church sits on the site of the temporary church that was inaugurated in 1639. The church that is there today, however, was built in 1680 and inaugurated on April 19th1696. The architect was Lambert van Haven, who designed church in 1682 in the Dutch Baroque style. The floor plan is a Greek cross with the church being thirty-six meters high from floor to ceiling. The theological thought behind the church was to demonstrate that all creation has an order. First the focus is on God, but divine right goes next to the king.
After walking into the sanctuary, the immediate impression is that of a simplistic grandeur. There can be no doubting God’s mighty and absolute thought. 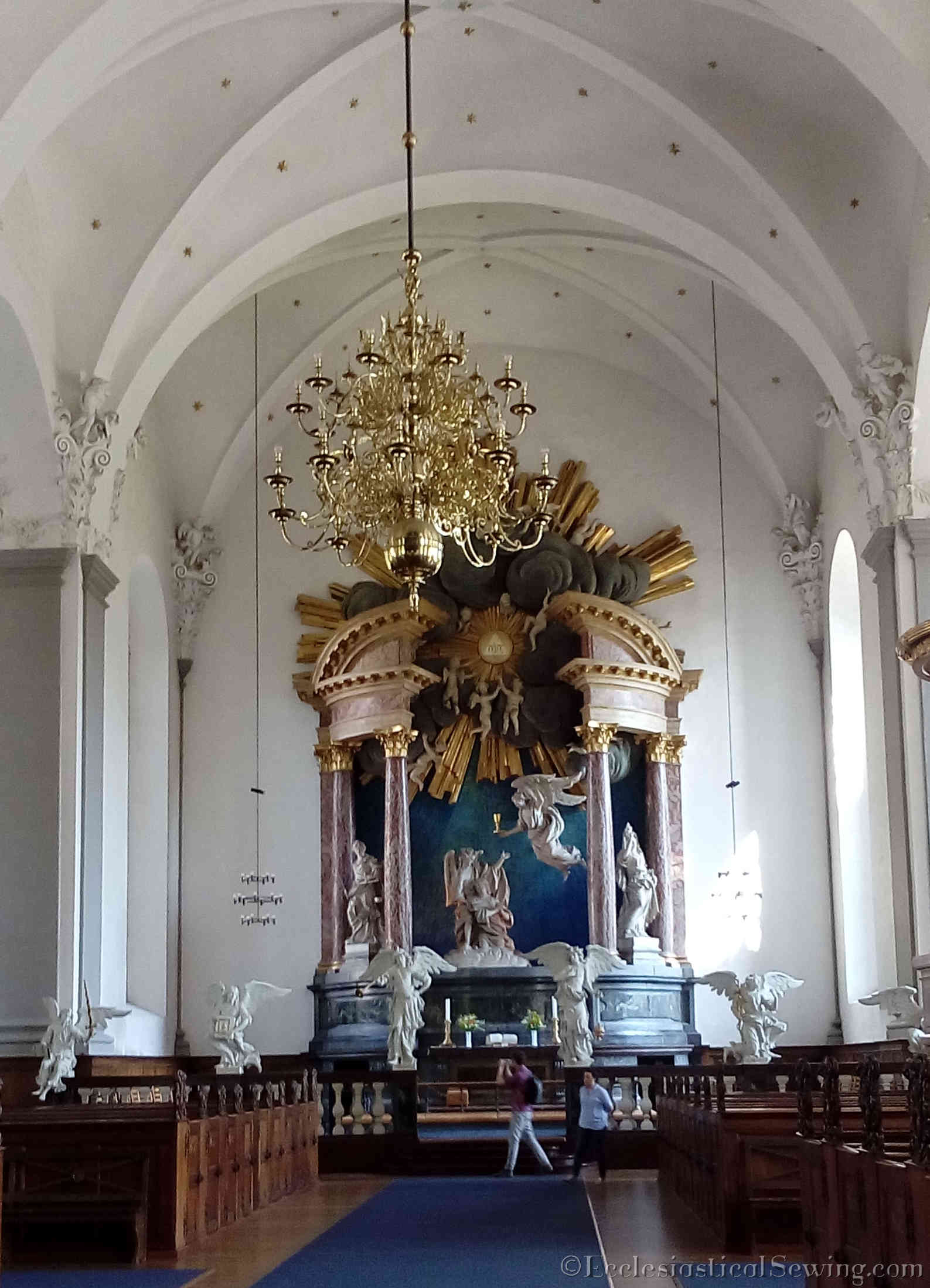 The walls are whitewashed, which helps to capture the sunlight that comes in through the various windows. All eyes are immediately forced to focus on the altar because of the stark contrast of the blue tinged with gold.
The altar was designed by Swedish architect Nicodemus Tessin, and completed and inaugurated in 1732. Instead of choosing the popular choice of a crucifixion, Tessin worked to recreate the scene of the Garden of Gethsemane. 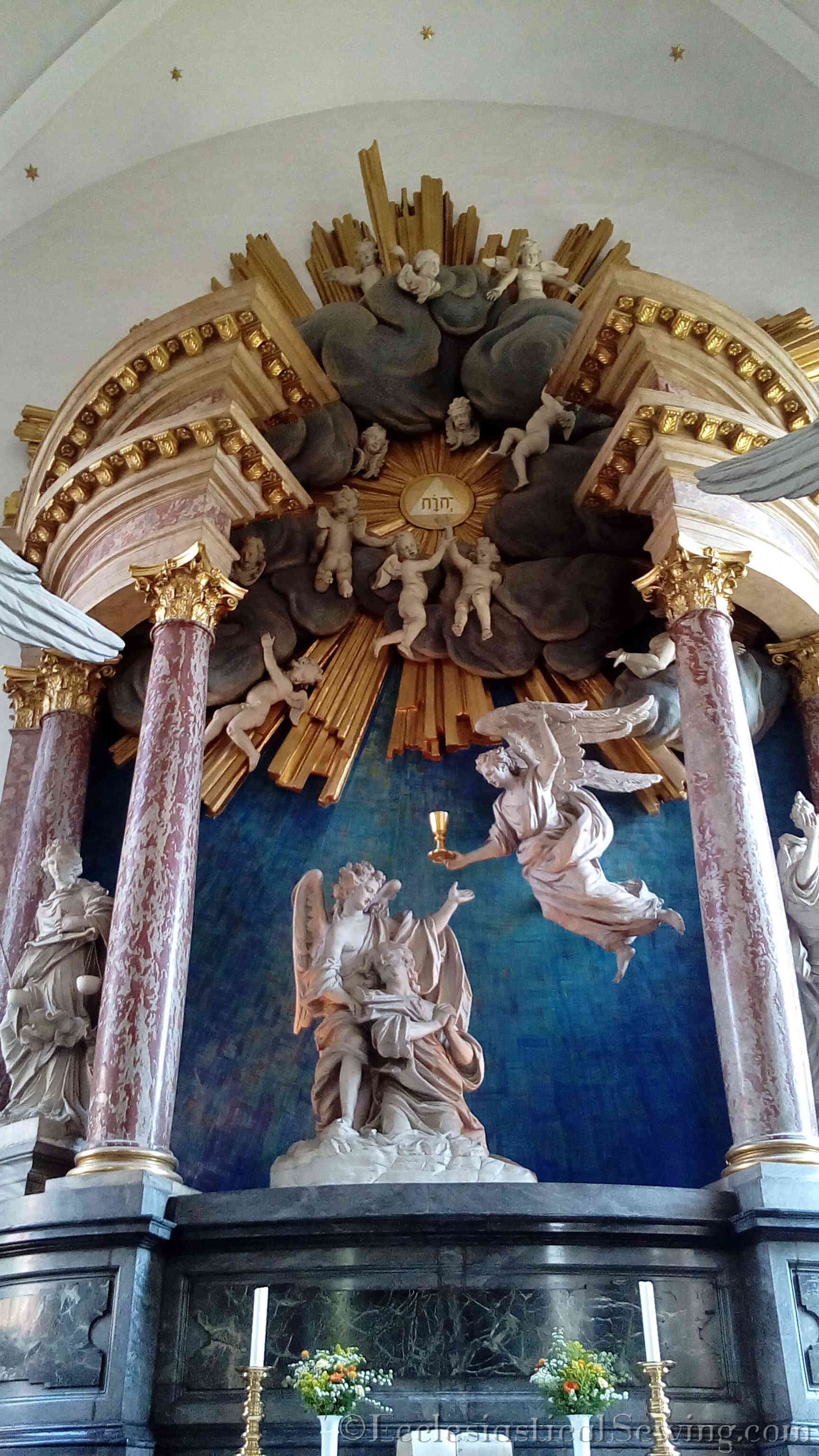 Jesus is praying for the will of His heavenly Father to be done, but if it is possible, to let the cup of dying on the cross pass. The angel is sent in response with a cup, symbolizing God’s decree for Christ to fulfill His purpose. But there is an angel behind Christ, ministering and strengthening, comforting and encouraging Him to symbolically take the cup given Him by the Father.
In the very Baroque style, a cherub, a prophet, and four angels, carved of wood, stand on the balustrade. The two outmost angels are unnamed. But the one to the left is supposed to be the angel that guards the Garden of Eden. This is a reminder that all have fallen short of the glory of God and paradise. Next to him is the prophet Jeremiah, and finally on that side there is the angel Michael. 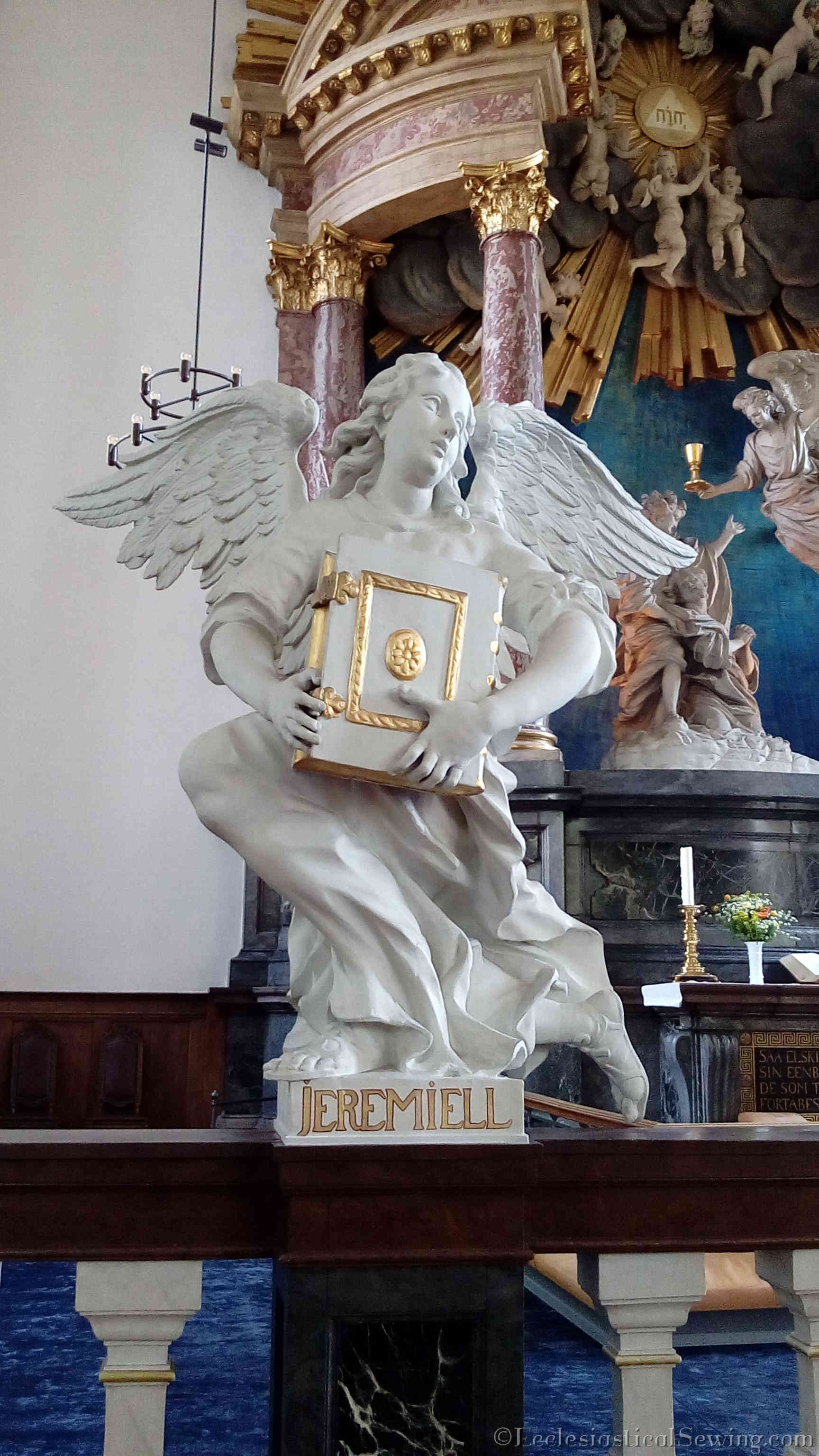 Jeremiah holds the Book and Michael the trumpet that he has poised in readiness to sound on the last day. 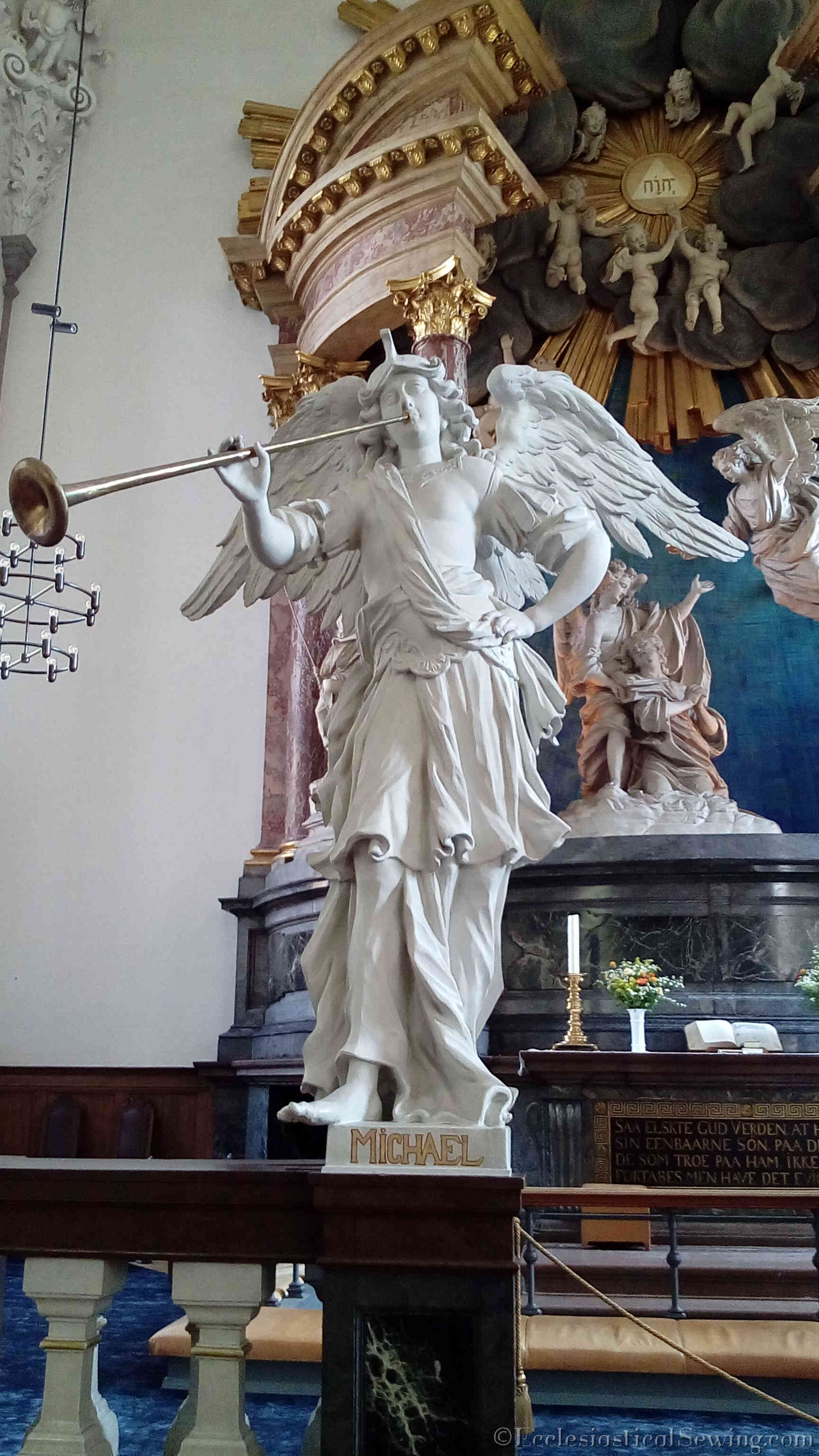 Across the way is Uriel from Milton’s Paradise Lost. 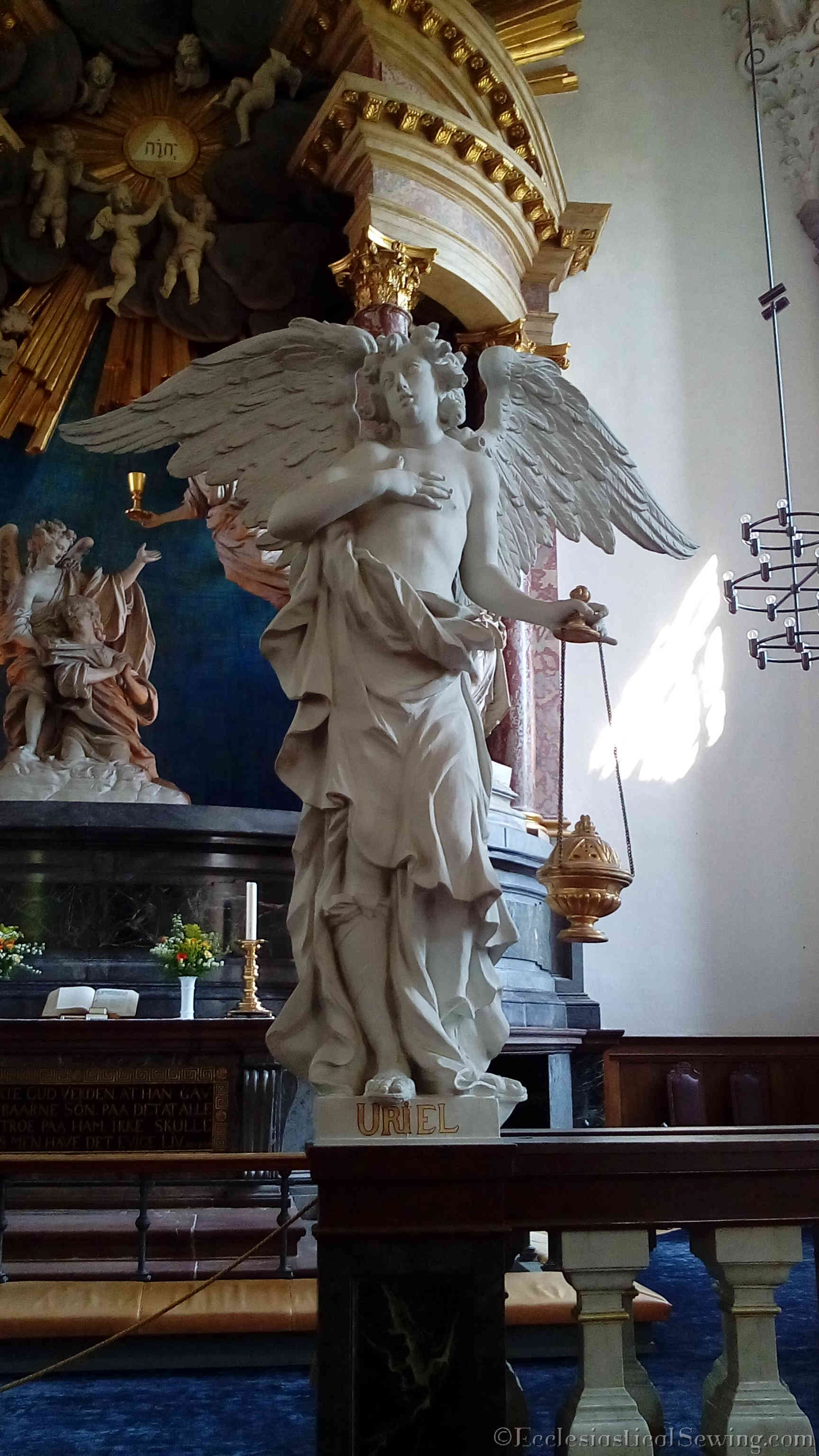 This is an unbiblical angel, but his image is important to link man to myth and back to God. 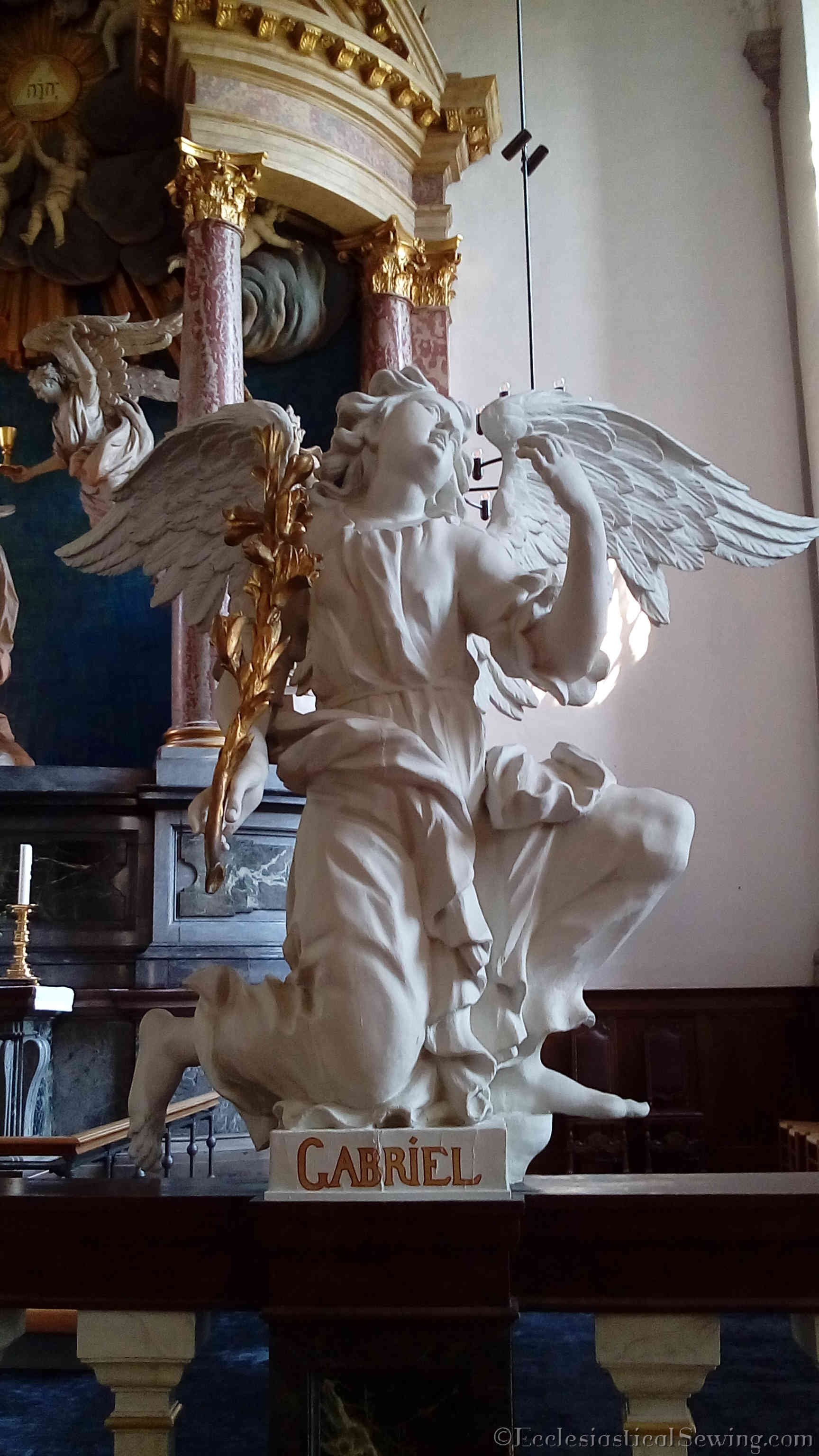 Then there is the beautiful angel Gabriel, who told the Blessed Virgin of her place in God’s plan. Finally on the far right is the angel Raphael with a jar of healing salve. 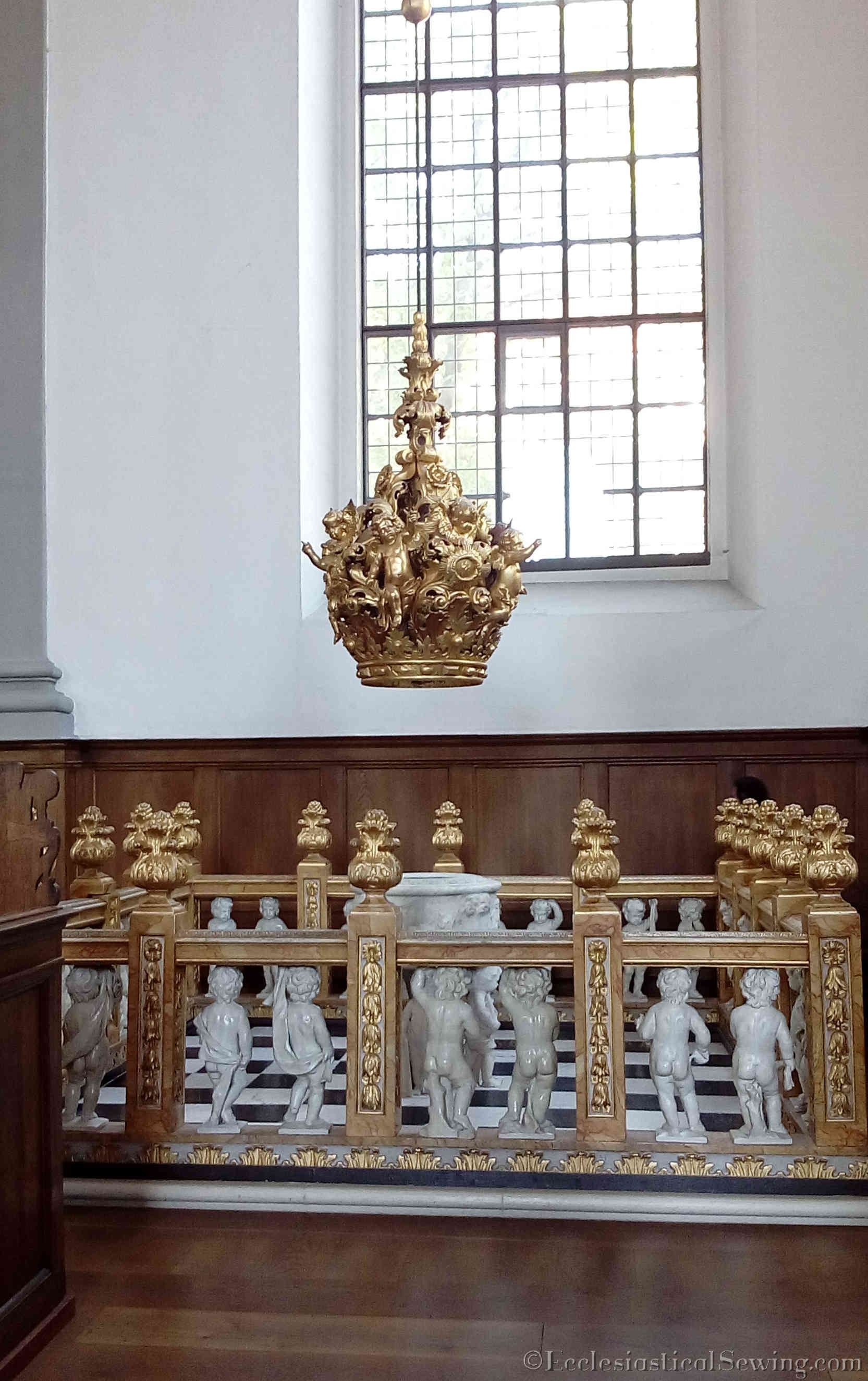 Hanging over the Baptismal font is an intricate and sophisticated piece. It is decorated with carved Biblical images. 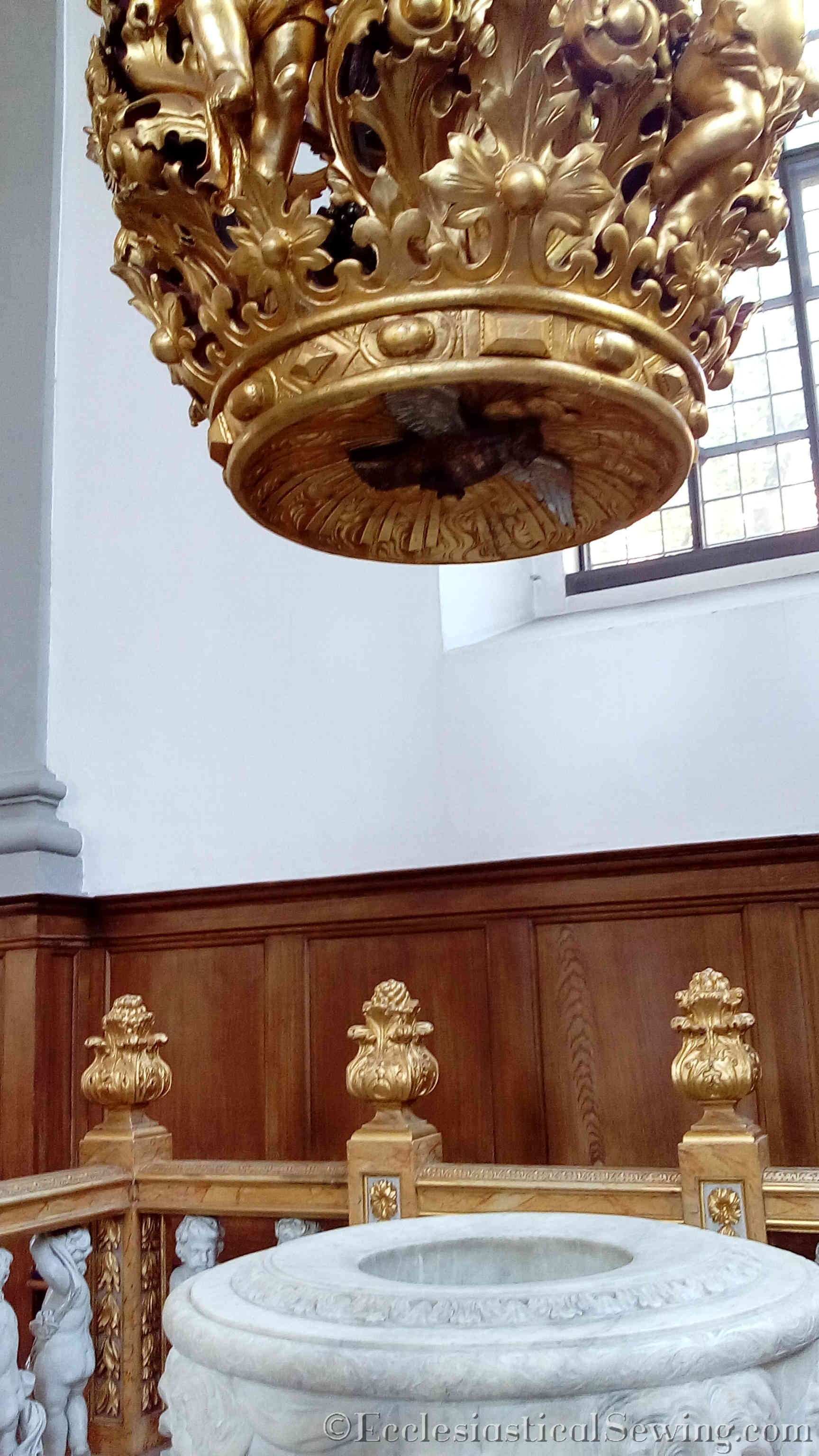 Underneath and seeming to hover over the water is a dove. 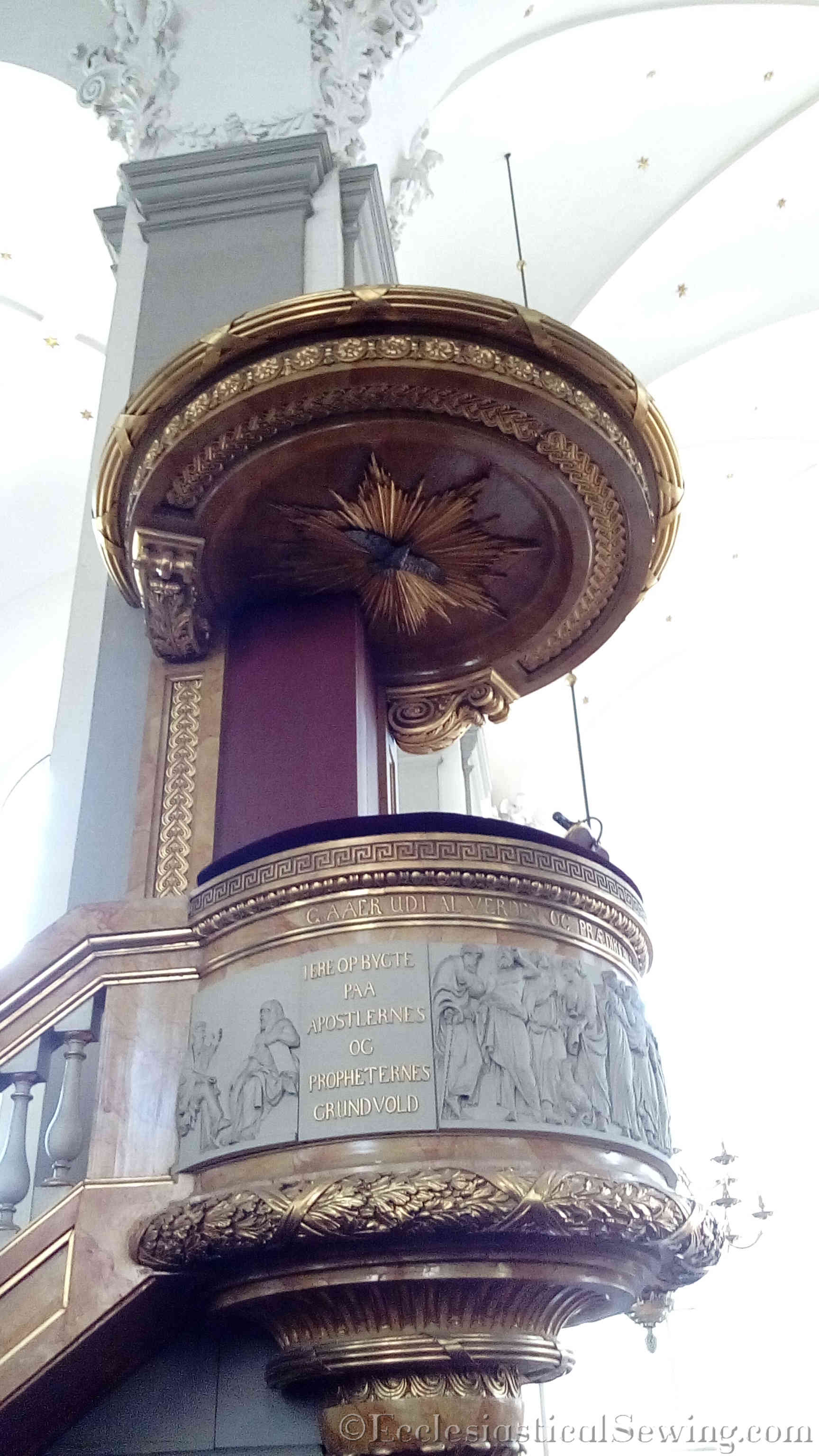 A close look directly across the room at the sermon pulpit shows another dove hovering and watching over the minister as he speaks. The church first acquired a pulpit in 1773. 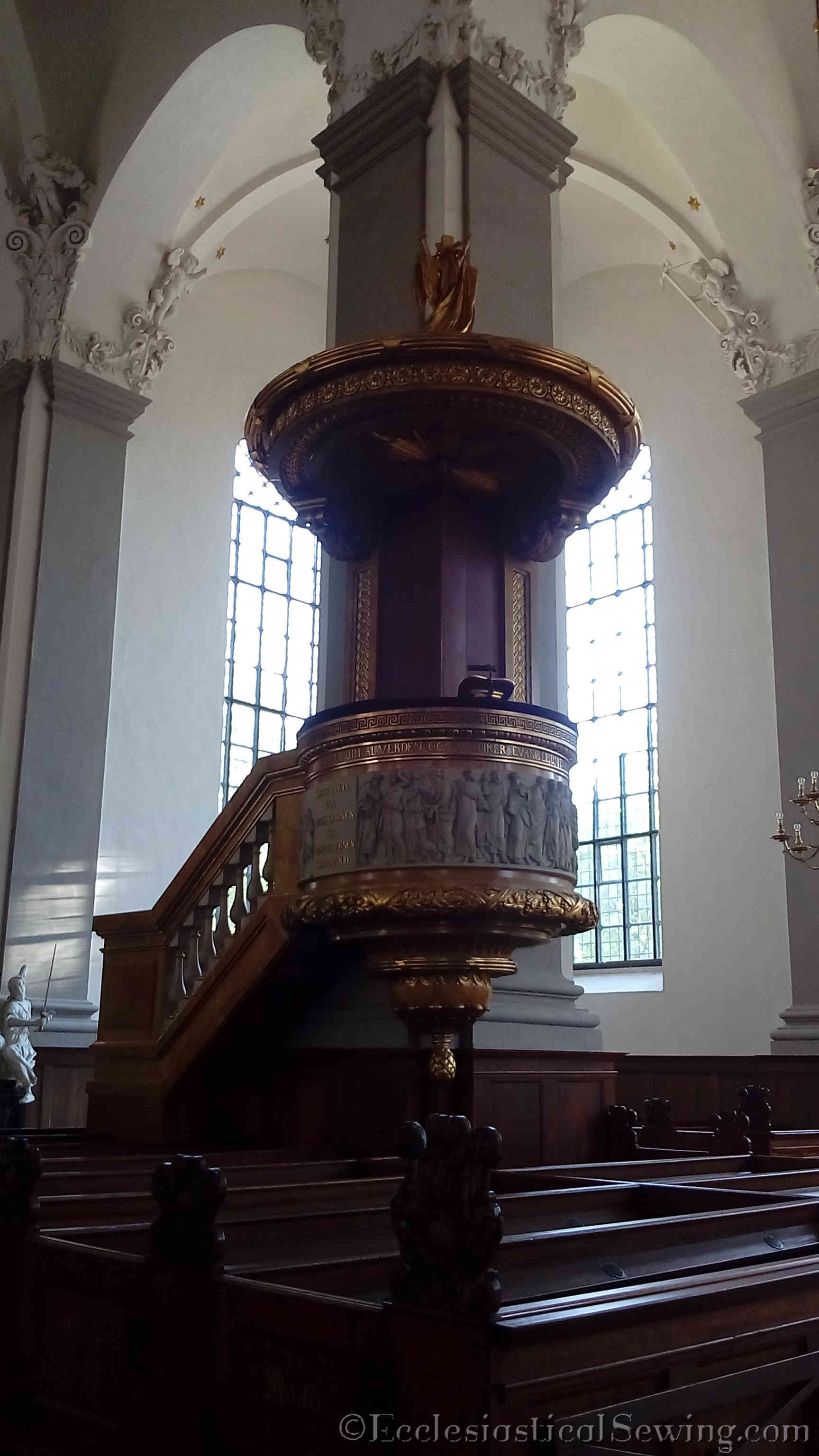 It is decorated with the apostles around the outside base, Christ, however, is absent from the art of the pulpit. The other pieces of decoration that are worth noting in the interior of the church are the stucco angels and elephants. Elephants are not a common decoration in a Lutheran church in the United States of America. 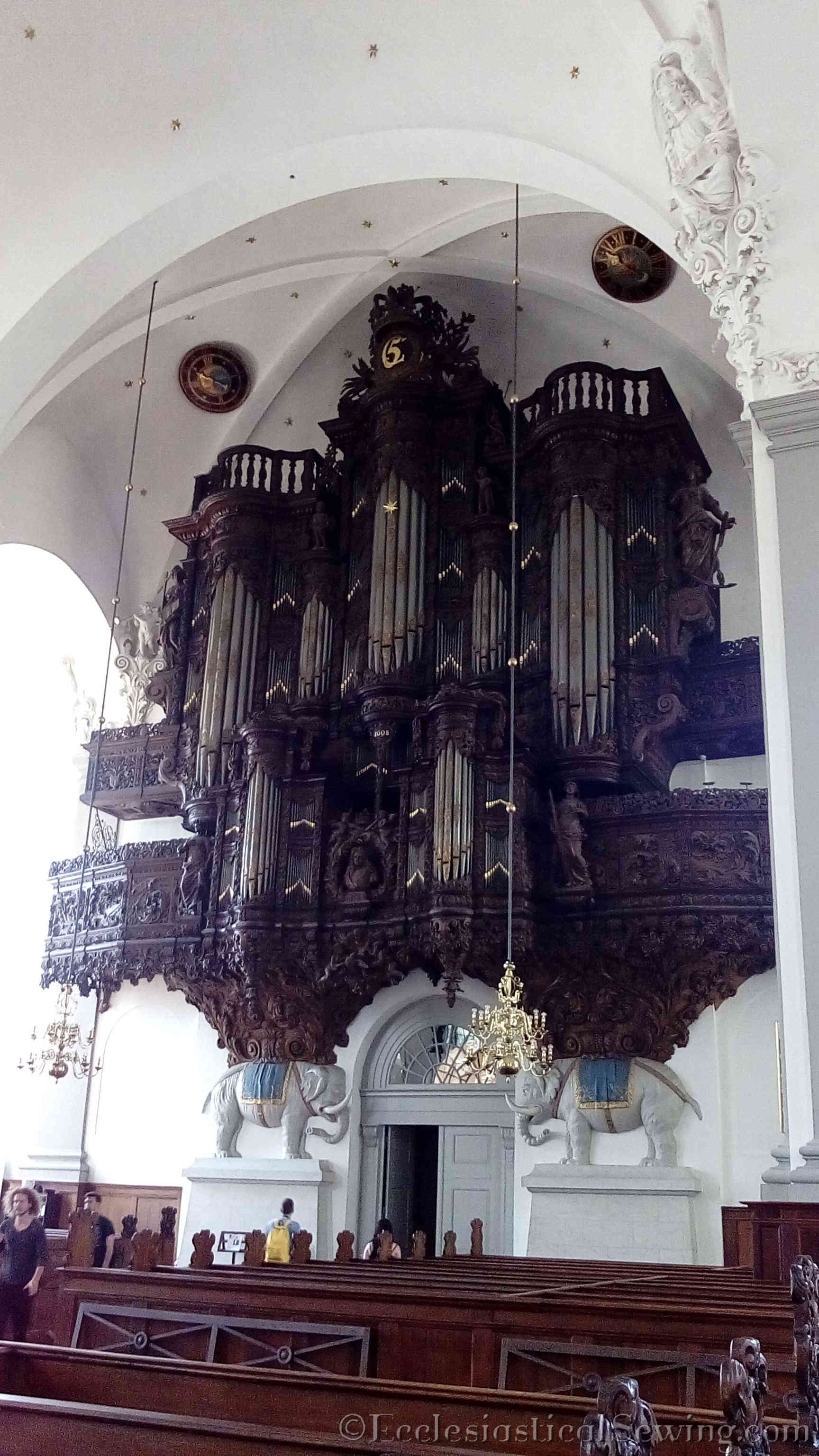 According to Christian the V, who was king while the church was being completed, Elephants were the finest creatures that his empire could boast of–although not native to Scandinavia. As the grandest creatures, they highlighted the social hierarchy that influenced and intertwined the church. The grand organ looks as though it is resting on the backs of these majestic creatures.  The case of this organ is three stories high, so who but a mighty beast to bear its weight? The organ was originally requested to be part of the church by Christian V. The brothers Botzen constructed it in two years from 1696 to 1698. 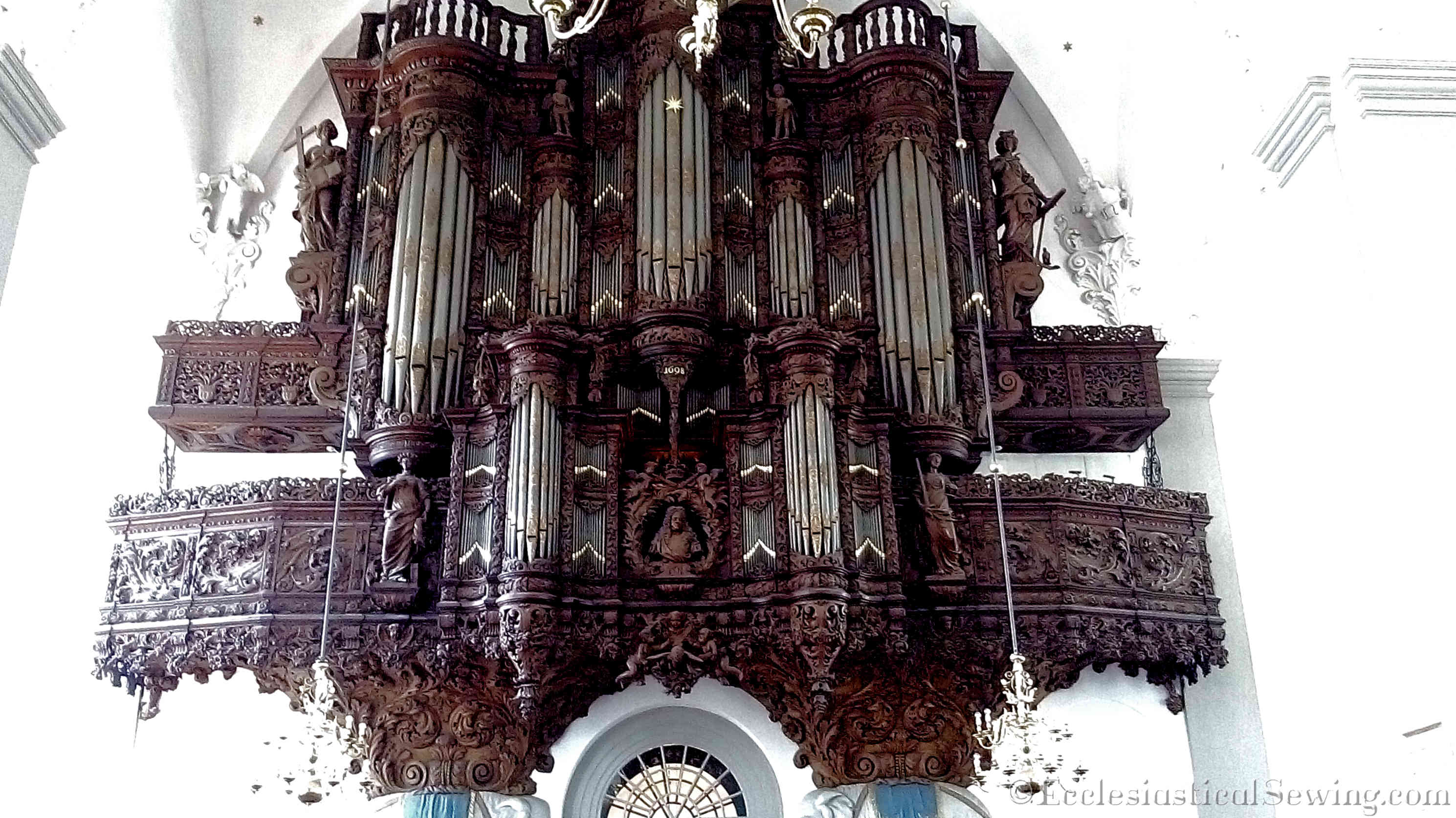 The organ and the music it produces are original to the time it was built. It is a miracle that this piece has lasted 300 years, surviving wars and fires. As one of the oldest in the world, it holds wide renown and a famous reputation.