What could be more beautiful than white Carrara Marble, German Stained glass windows depicting Biblical scenes from the life of Christ, magnificent statues and classical architecture with soaring ceilings? There are undoubtedly many churches throughout the world that might lay claim to such a description. One must only close their eyes to envision such a place. On a recent business trip to Denver, which was sadly not related to Ecclesiastical Sewing, I was able to carve out half a day to take one or two side visits. I confess I had not planned ahead, knowing the trip was short, and time would be limited.

Upon arrival in Denver, a quick search via internet revealed a Catholic Church located a short walk from our hotel. Chances were that a visit to a Catholic church in a major metropolitan area might yield at least one, or possibly two Ecclesiastical Sewing Treasures. And if it failed to reveal said treasures, the weather was fine, and a walk would be lovely. Denver was a little on the warm side, in the 90’s. So the walk was not very fast. 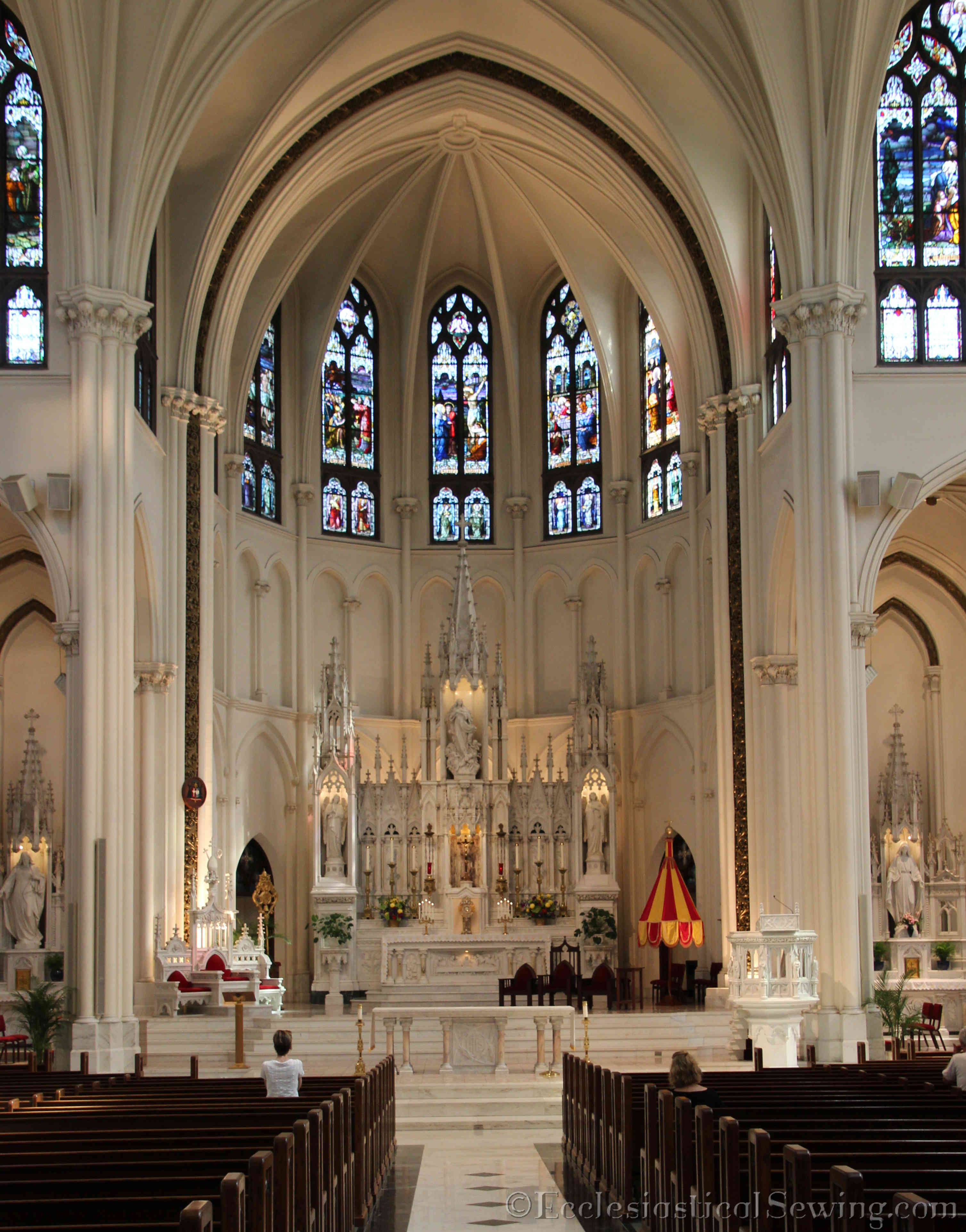 We arrived at the Basilica only to find it under various stages of restoration – at least on the outside. The brass front doors were hidden by scaffolding. But an entrance was open and soon yielded entry into a most lovely church interior. Upon entering the church, ones attention is immediately absorbed by multiple areas and design features, which include extraordinary stained glass windows, altars and statues.  The Basilica has a High Altar and two side altars, each under soaring vaulted ceilings graced with stain glass windows featuring a story from the Life of Christ. 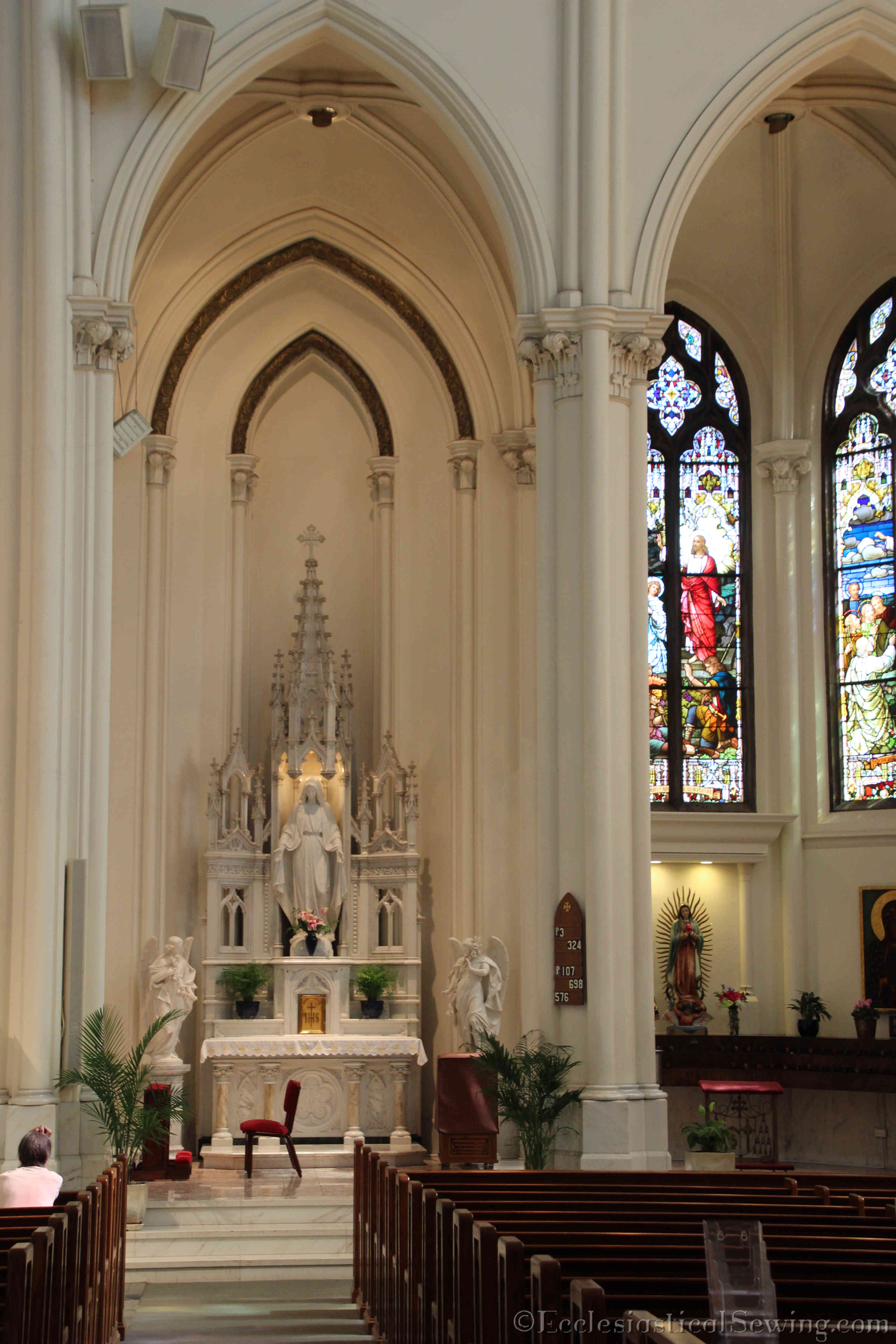 The Mary Chapel is to the right as one faces the High Altar. 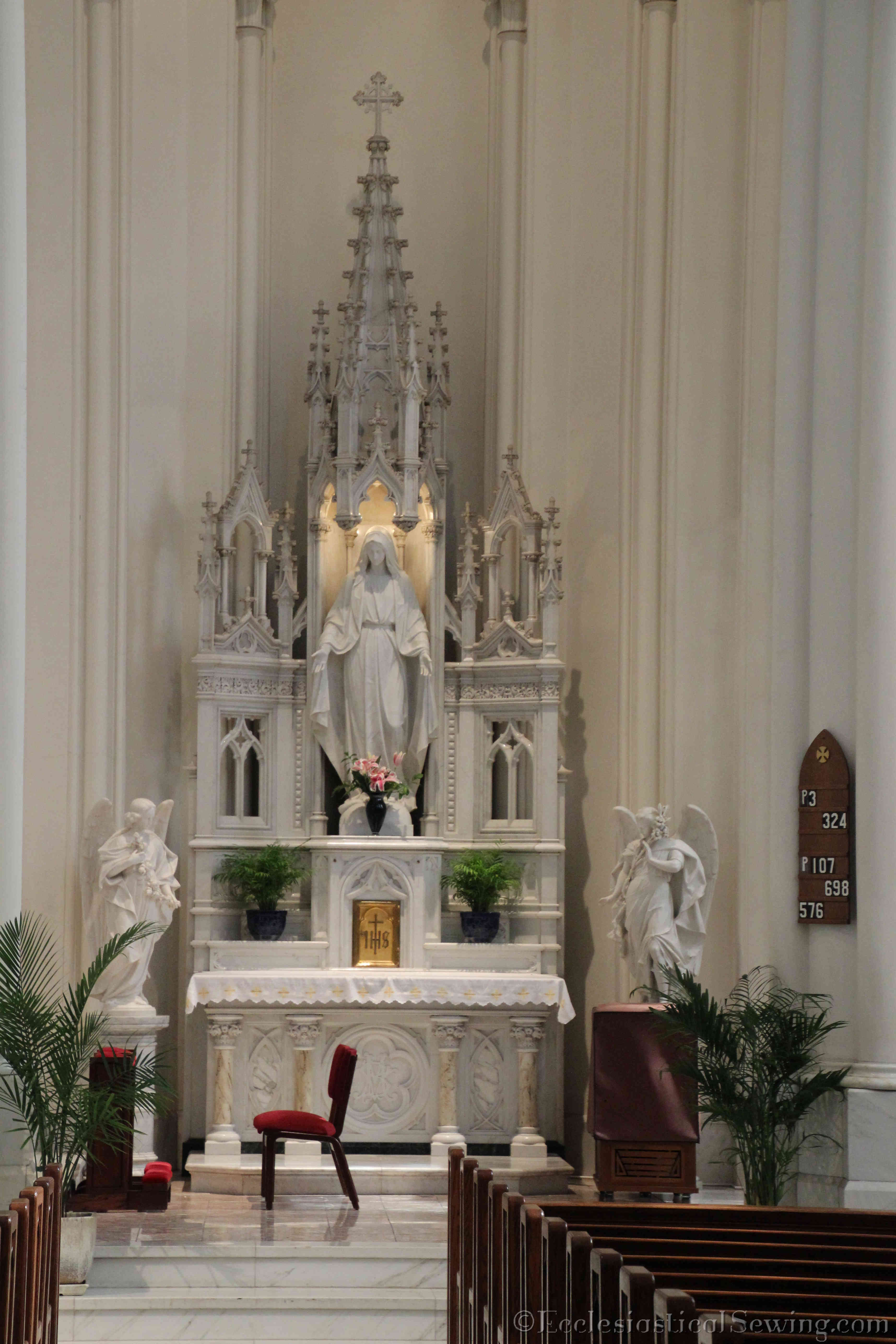 Mary’s Altar has an elaborate Marion Symbol carved on the front, along with the four columns and other detail. The altar is adorned with a simple linen cloth which has an embroidered edge.  After all, who would want to cover up all of the lovely carvings on an altar like this with a heavy altar hanging? 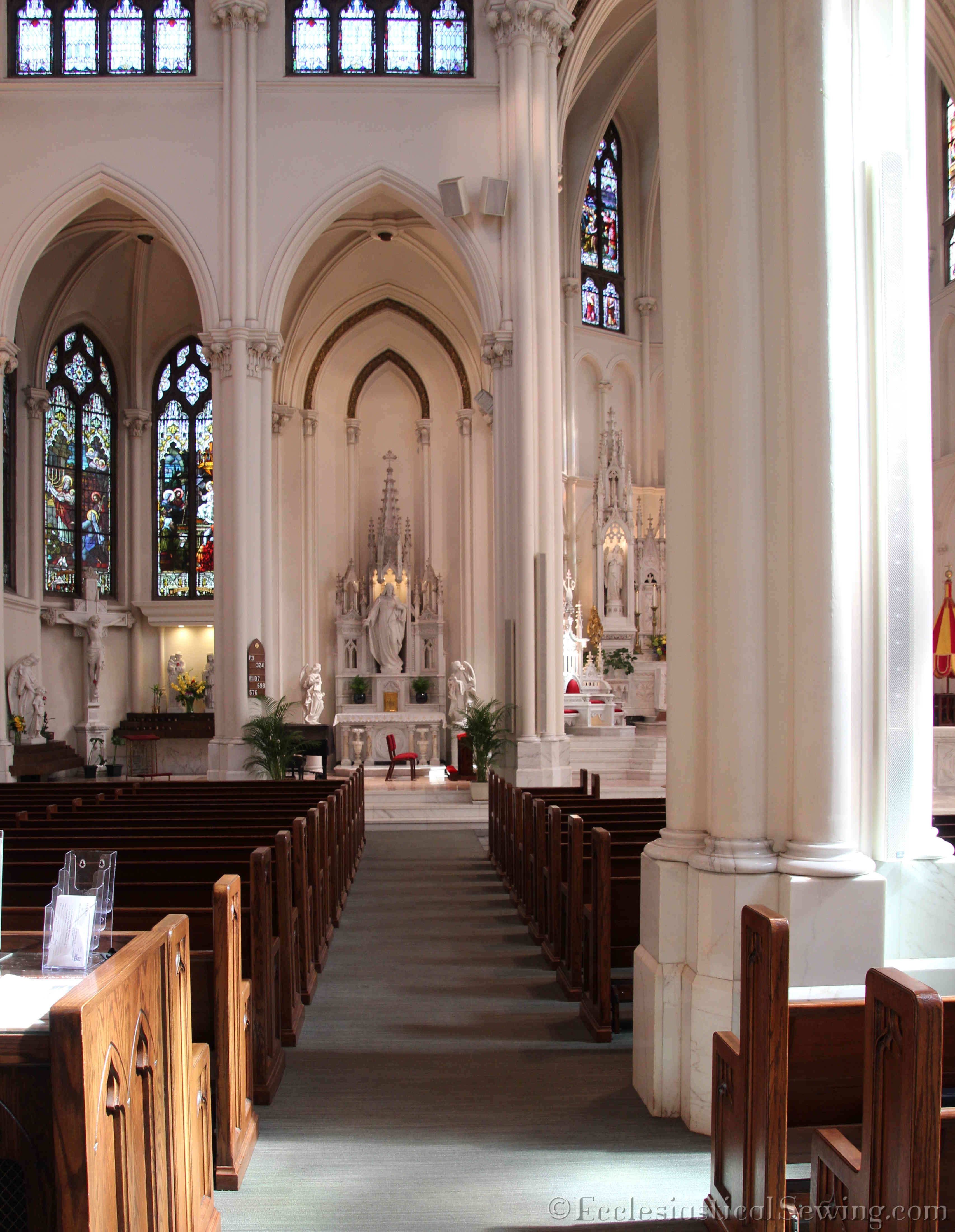 To the left of the High Altar is another side altar with a statue of Christ. 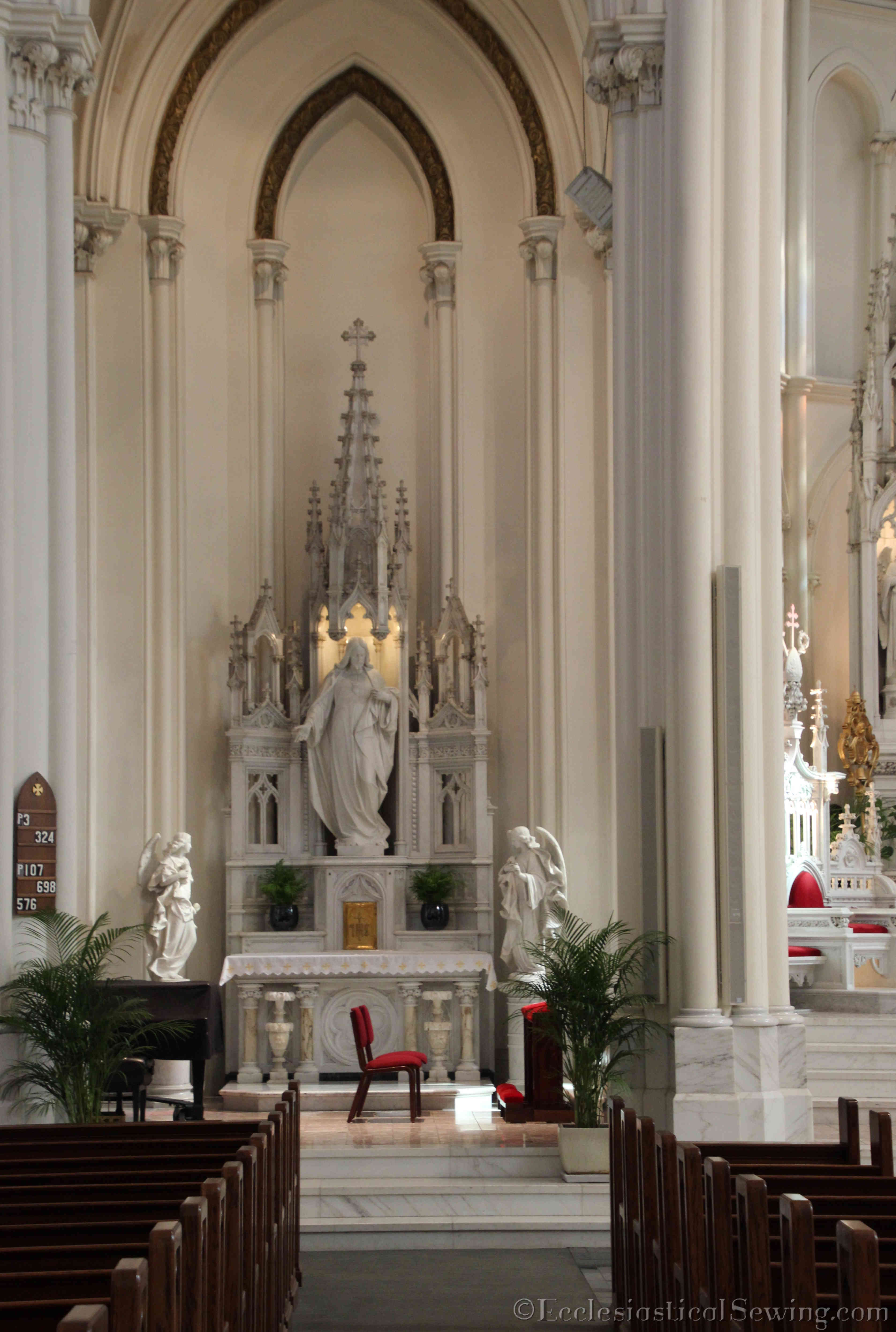 Elaborate carvings grace this altar, as they did the Mary Altar. The center motif on this altar features an IHS design. I love photo graphing these types of design. Once in a great while, there is one that is unique and different enough to be translated into an embroidery design. 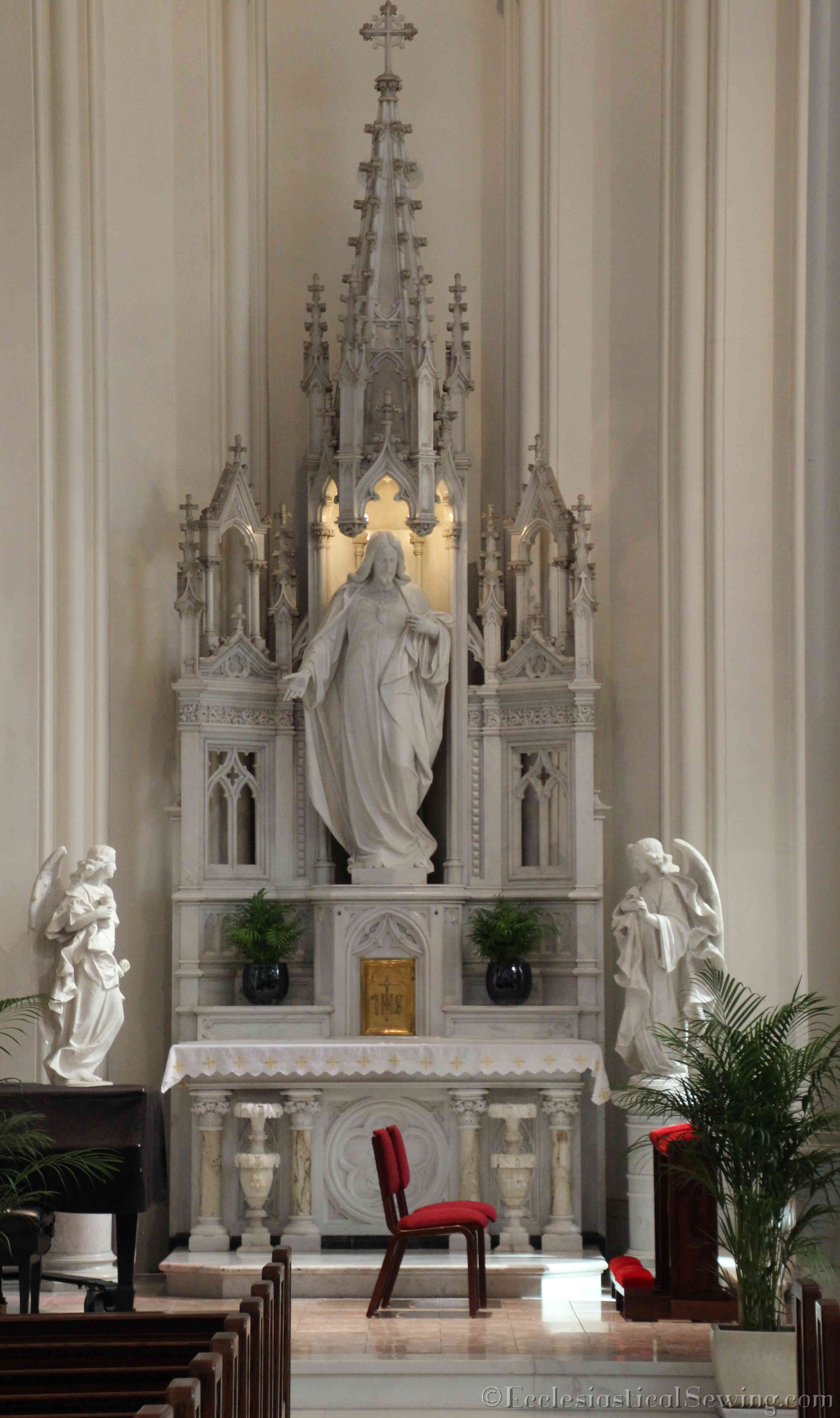 The altar linen cloth is identical to that used in the Mary Chapel. Even from a fair distance, the use of color is evident on this altar cloth. 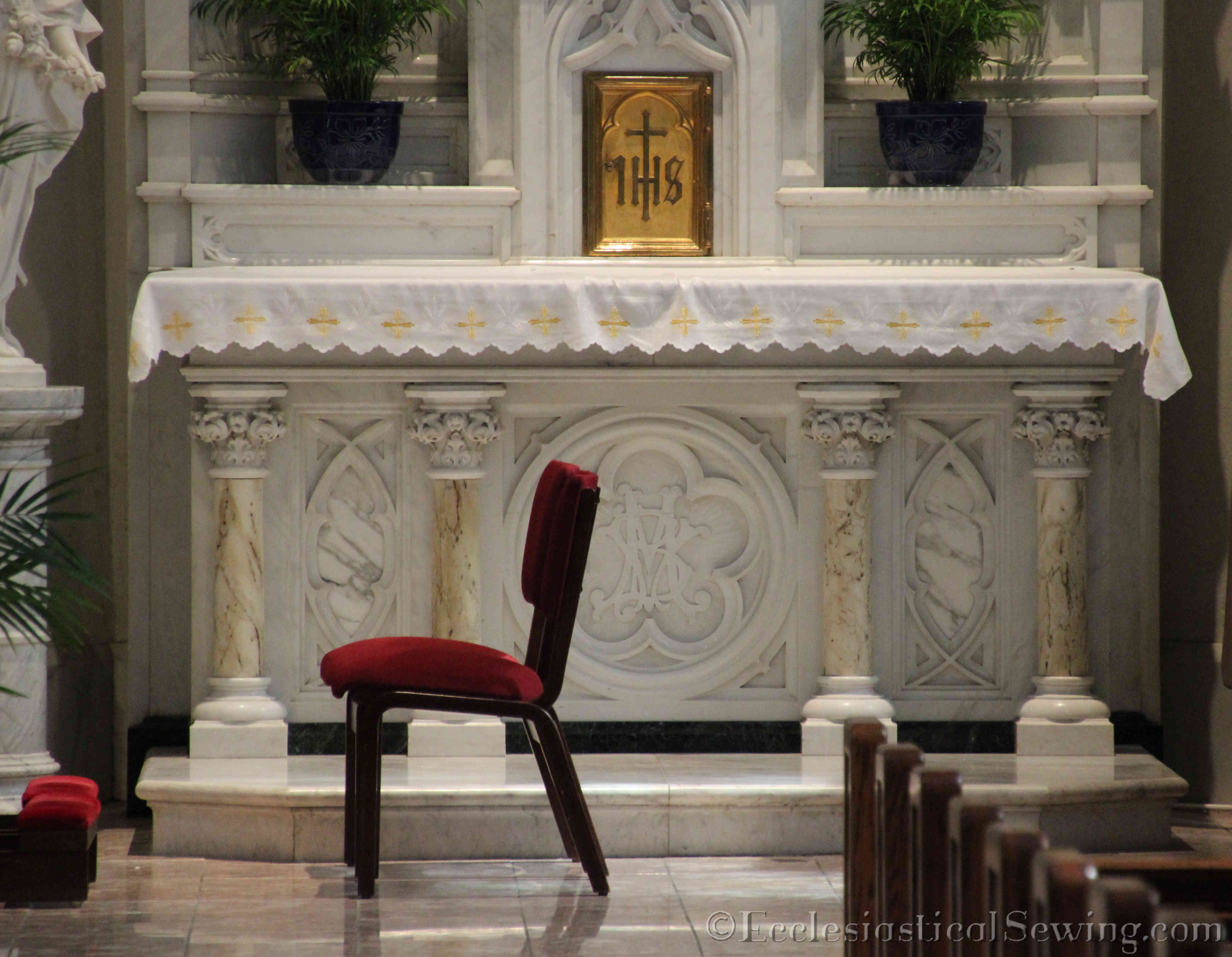 This is the altar in the Mary Chapel which allows a closer view of the altar linen. The edge of the linen is cut so that it hangs over the front of the altar by a few inches. This linen edge in embroidered using the colors of white and gold. And it fits this space perfectly! There is so much white inside this Basilica. The gold provides a much-needed contrast so the altar linen is not lost among all of the other whites of the chapel. 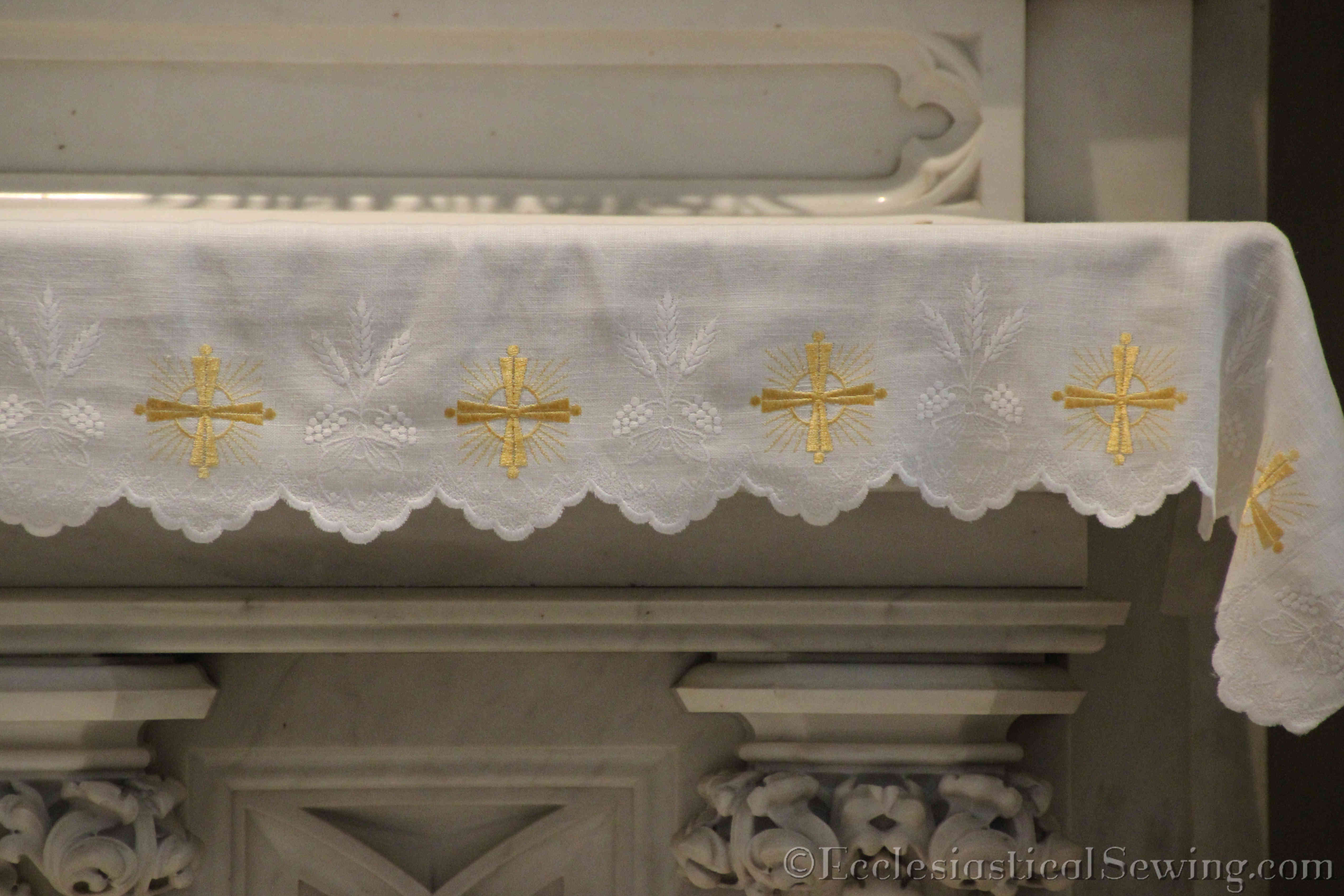 Taking a closer look, I noticed that design motifs of the altar linen feature a cross worked in gold embroidery thread, and a wheat and grape motif worked in white embroidery thread. The edge of the altar linen is scalloped with a scalloped or shell satin stitch, making a perfect complement for this lovely Basilica. Perhaps this color combination of white and gold embroidery might serve as an inspiration for some future Church Linen projects.

There was much to see in the Denver Basilica, but time was limited. Much of my time was spent trying to photograph the exquisite stained glass windows.  Those photos still need some editing and a few may find their way into future Ecclesiastical Sewing posts.  Until then.