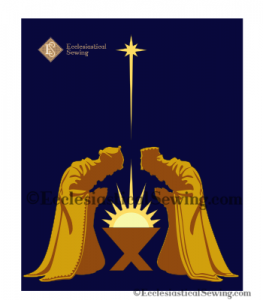 If your family is like most families in America, the chances are that gifts are exchanged on either Christmas Eve or Christmas Day. But do you remember the song, “The Twelve Days of Christmas?” Why twelve?

Between December 25 and January 6, there are ten days. Add those days, and you have twelve. In Western churches, we call January 6 “Epiphany.” Certain Orthodox churches that follow the Julian calendar have different dates: January 7 is Christmas, while January 19 is Epiphany. However, the meanings are somewhat the same among all forms of Christianity.

In the West, Epiphany represents the wedding at Cana, the Baptism of Jesus, and the coming of the Wise Men from the East with their gifts. In Catholic countries, the emphasis is placed on the Wise Men, and the holiday is often referred to as “Three Kings Day.”

All over Europe, there is a common tradition of a special cake that is made. Most countries call it a “King’s Cake,” and what it has in common is some sort of item hidden inside. There are regional differences: the British make a dense fruit cake, while the Germans and French prefer a spiced form of puff pastry. Other countries enjoy fruit or almond fillings. Regardless of the country, whoever finds the toy or token gets to be “king” for a day and often wears a gold paper crown. In Spain and New Orleans, there’s also a bean hidden in the cake. Getting that means you have to pay for the cake or host the next party.

Other regional traditions are more distinct. In Italy, Spain and Latin America, children shine their shoes and put them out overnight. It is believed that good children will get nice treats and toys in those shoes, while naughty children will get coal. This coal is a type of rock candy dyed black and is still a seasonal treat. Italians say that a good witch places the gifts, while in Spanish-speaking countries it’s believed that the Three Kings delivered them.

Irish women traditionally get the day off, in a tradition called “women’s Christmas.” The men cook and do the dishes, while the ladies get to have their own party. British, Portuguese, and German families will actually go singing from one door to the next, while certain other countries have parades celebrating the Three Kings, and in Italy people wear costumes. Lastly, in Poland and Germany, there’s a tradition of marking window and door sills with chalk. The mark is C+M+B, sometimes framed with the year. It stands alternately for the names of the Kings, or for a Latin phrase meaning “bless this house.”

Orthodox countries place a different emphasis on Epiphany. Instead of celebrating the Three Kings, most observe Epiphany with a blessing of the water. This tradition is most evident in Greece and Turkey, where the weather is fairly warm in January. Local villagers will process to the nearest body of water, along with a priest and often musicians. There, the priest will throw a crucifix (sometimes more than one) into the water. A bunch of men will jump into the water and try to find the crucifix. Being the person to get the crucifix brings divine favor and protection from evil. Similarly, Russians will cut cross-shaped holes in the ice and jump in, immersing themselves three times each to represent the Trinity. Water in the local churches is blessed as well.

Since Epiphany is a feast day in the Western church, white vestments and paraments are used. Sometimes gold is substituted. There aren’t any specific Epiphany symbols, but there are often representations of the Three Kings elsewhere in churches.

So my question for all of you is this: How are you celebrating Epiphany?

“The History and Traditions of Epiphany from Around the World.” Translingua. Accessed December 28, 2019. https://translingua.com/history-and-traditions-epiphany-around-world/.