All hand embroidery and sewing is a series of steps, completed in an orderly progression, which builds on itself, and in the end becomes a finished item. Framing linen may be familiar territory for many of you, and you may even have suggestions on how to do this better. But for those who are unfamiliar with the use of a stretcher frame, bear with me while I try to provide detailed, step by step instructions for a beginner.

So – let’s jump in and get that next step finished so we can move on to another step.

To frame up the Altar superfrontal design and the pulpit fall design, the selected frame sizes are 16″ and 23″ bars. If one looks closely, the bars in the above photo are not the same size. Notice that the 23″ bars are slightly “thicker” in their width.  This is a nice feature which ensures that a long bar length will not bow or warp while stitching. Seeing the different sizes may lead one to believe that these bars are not intended to be used together. And so i thought. But I have set up several frames that use bars of the different widths and so far have not had any issues.

These are such “solid” frames that feel good to use.  Another nice feature is that each end of the bar is stamped with the length measurement so no need to ever be guessing if you have a matching pair! 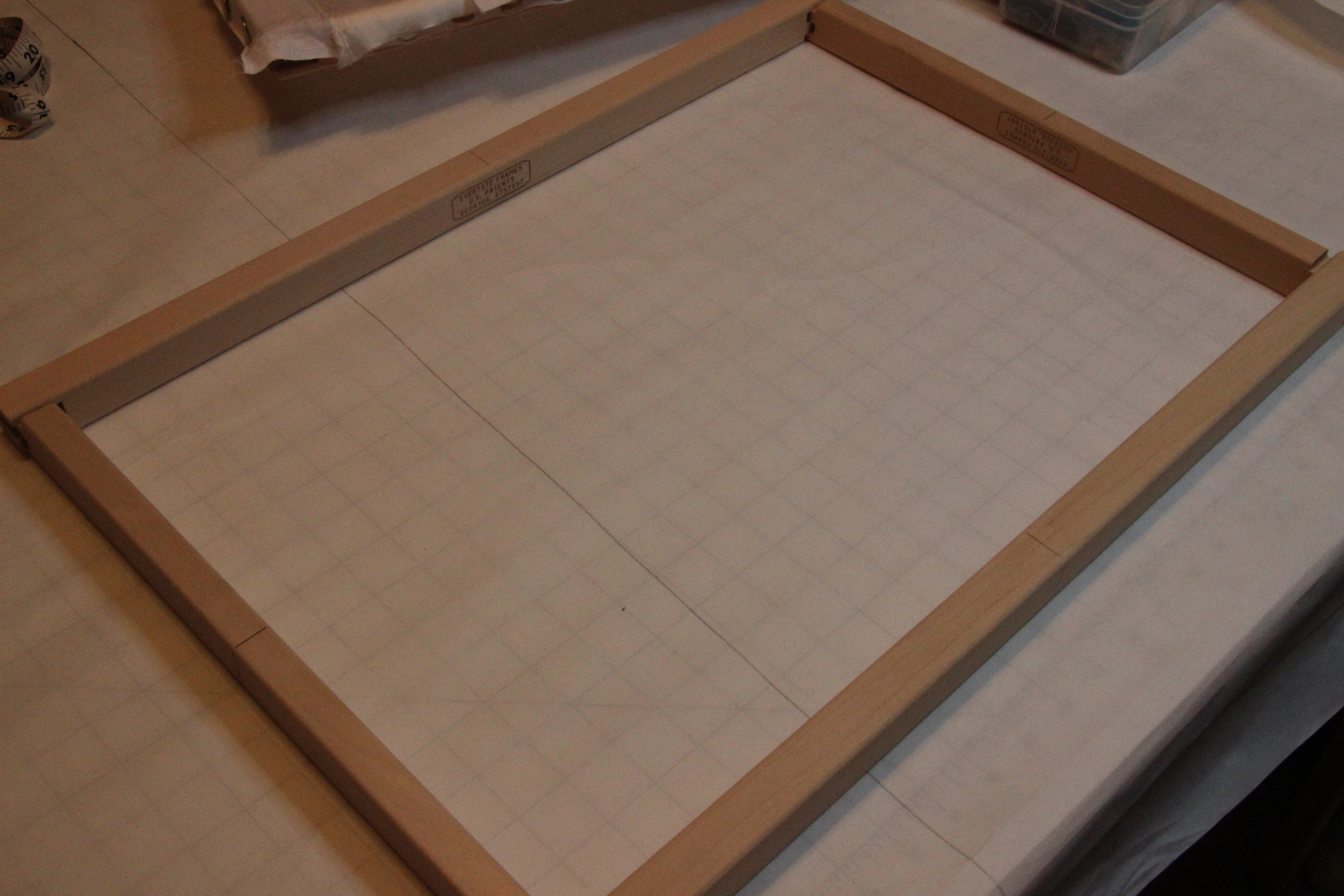 Once a frame is assembled, there is a tiny step I take with every stretcher frame before the linen is applied. The frame is placed on my work table and checked on the gridded mat to ensure it is squared up. It is amazing how often the frame “looks” square and is not.  A tiny nudge here and there fixes the issue easily.  If the frame is not “square,” the linen could be stretched off-grain which could lead to a myriad of problems. Oh – that is not a pleasant thought!

Preparing the linen for framing is the first step. It should be preshrunk and pressed before starting the framing process.

Linen should always be cut by the thread.  Unfortunately, the camera was not out during the cutting process.  It went like this:

Next, the fabric was folded in quarters, and a tiny crease was made in the middle of each of the four sides. The crease becomes the reference point to be matched to the center line of each bar as you can see in the above photo.

Continue pinning down the width of the frame, and alternate with pinning the length.  As this framing moves along, on occasion, a section may have the tacks removed, the linen stretched a little tighter, readjusting a section at a time.  I like to get the linen drum tight or as tight as possible when it is stretched on the frame the first time.  That still leaves enough room to make lots of adjustments to tension with the adjustment screws during the stitching process.

There are specific tacks available for use with the Evertite Stretcher bars and they work great. But, having only 2 packs of the correct tacks, and 4 projects framed at the moment, there were no more of the correct tacks on hand.  They have to be ordered.  Trying to avoid that delay, I went to my local builder’s supply store and purchased a box of tacks.  They are smaller than the original Prima tacks both in the size of the “nail” and the size of the “head.” What I noticed in using these building store tacks is that they frequently “bent” as they were pushed into the frame. Two of the tacks actually broke.  One tack had the head break off, and the nail part was still stuck in the frame.  Luckily I was able to get the nail out.  Pushing these small tacks into the frame was not easy at all. It was a rather painful process. So, lesson learned: in a pinch, the tacks from the building supply store will work, but the ones that are made for the frame, with the larger head and nail, are much easier to push in the frame. And I have never had a problem with one of the original tacks bending, breaking, or causing pain during the framing process.  The correct tacks are on the shopping list when I next get to the needlework shop.

So, the frame and linen are ready to go.  It is a light cambric weight linen, intended for use as altar linens such as fairlinens, corporals, purificators, and the like. Later on I will explain my thoughts behind the selection of this linen as the base, and as the project progresses, we shall see if it was the correct choice.

This frame should hold the pulpit fall design as well as the Alpha and Omega, and cross for the superfrontal of the Advent vestment set.  Tomorrow, I hope to have the designs and the applique pieces in place.

Until next time……….may all of your projects frame beautifully!