Did you ever look at a poncho and think that it reminded you of something familiar? We know that the poncho, a Spanish garment, originated in Spain and today is seen in South America as a legacy to that old European nation. The origins of this garment, however, can be traced even further back to the church vestment known as the chasuble or paenula. 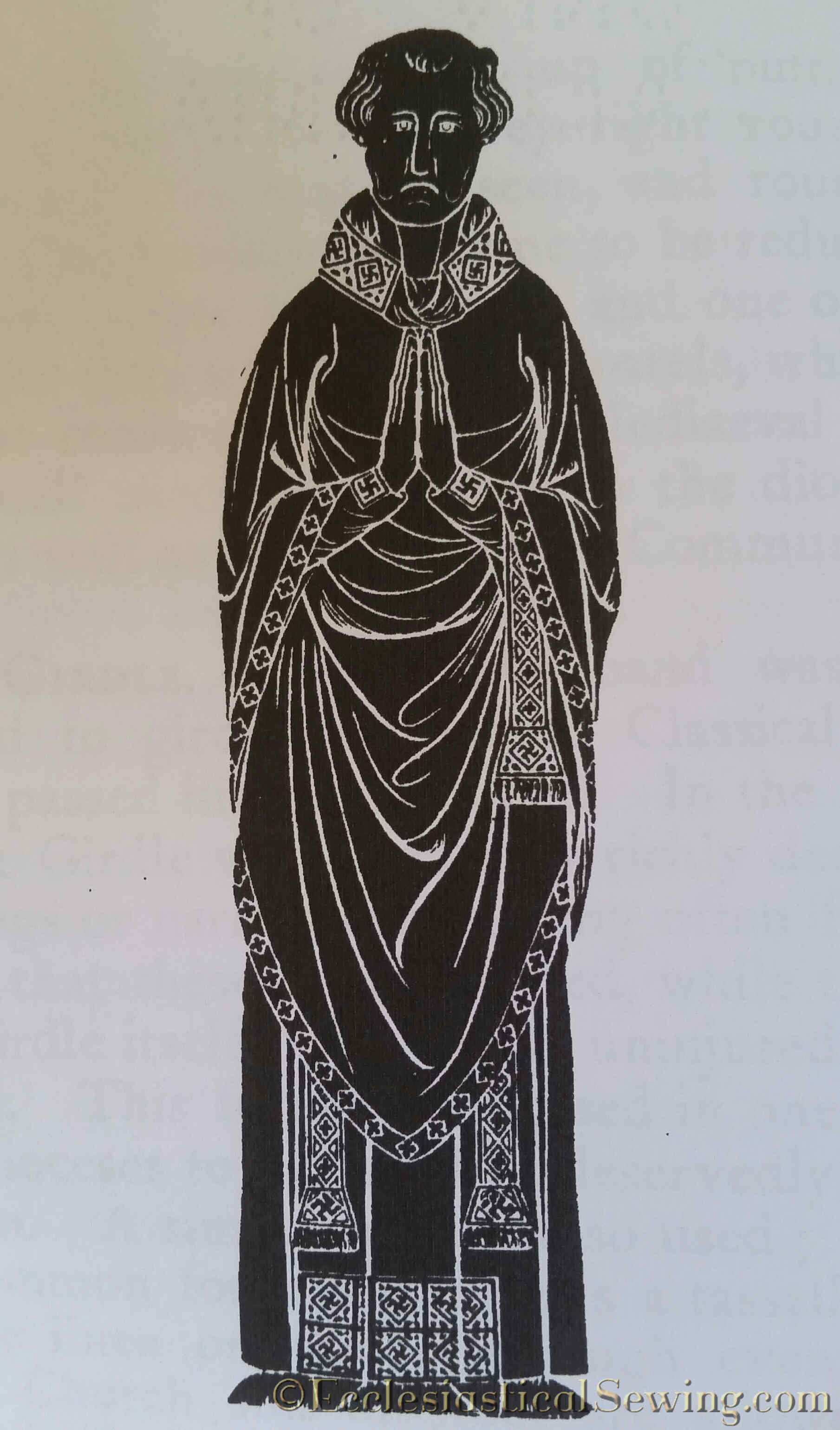 The paenula was a type of cloak, common in the ancient world for protection against the elements. The paenula was marked by its circular shape that fell around the wearer’s body in a protective cloak like manner. The first mention we have of a paenula being used as an ecclesiastical garment comes from 2 Timothy 4:13. Paul is here asking Timothy to bring his traveling cloak, a paenula, that he had left in Troas.

Above we see the mosaic of St. Ambrose, constructed shortly after his death in 397 A.D. He is wearing an alb, a dalmatic, a paenula, and shoes. This beautiful piece is considered to be a good likeness, owing to how quickly it was created after the bishop’s death. If any of my dear readers are able to travel to Milan, do stop in the Basilica di Sant’Ambrogio and find this mosaic. Also see the skeletal remains of St. Ambrose, arrayed in ecclesiastical finery.

A larger, floor length, paenula has been known as an amphilbalus or a casula–derived from the word for house. The sight of a bishop or priest in old images always shows these officers arrayed in a large chasuble. The lay people, however, still would have worn such a garment, although possibly a less cumbersome version that was shorter. St. Gregory the Great, for instance, had a picture of himself and his parents. All three are decked in dalmatics and chasubles. We can mark the Bishop by the Pallium, the Gospels in his hand, and his tonsured head.

Those who wore a chasuble were merely wearing it as a garment, a cloak, for protection against the elements. It was the Council of Toledo in 633 A.D. that decreed the chasuble to be worn by all members of the clergy–bishops, priests, deacons, subdeacon, and acolytes–as a church vestment. The deacon, however, took up the habit of removing his chasuble and being seen only in the dalmatic. In the modern era, most of Europe held to this tradition of allowing all members to wear the chasuble. England, always the dear little rebel, decreed in the First Prayer Book that only bishops and priests were allowed to wear the chasuble.

In the Middle Ages, the chasuble was shaped less like a body cloak, and more like a bell. Over the years the edge was cut away at the bottom hem until the chasuble took up the shape that we see it today. The smaller amount of material was due to the change in material, from wool to a more stiff and decorative fabric. These decorative fabrics are then given more weight in the form of heavily embroidered orphrey bands. In its history, this garment has had an unusual period. Dearmer laments that during the Rococo period the chasuble looked like a fiddle shaped apron. Below there is a picture of a modern chasuble featured from a trip to O’Fallon, MO.

Today, as you look to buy or create a chasuble for use as a liturgical vestment, remember the words of Dom Roulin: “What [the world of thought and of taste] wants is that we should seize the essential character of liturgical vesture, and that we should be inspired by the best….”5 Keep this in the back of your mind as you plan to construct something that will be used as a church vestment in the holy worship service. For a more thorough reading on the chasuble, I recommend the sixth chapter in The Ornaments of the Minsters by Percy Dearmer.