Like the majority of modern ecclesiastical vestments, the cope has its origins in ancient garments. The cope, unlike other vestments, is a bit of a mystery. With an unknown origin, its ancestor could be either the garment known as a paenula, the lacerna, or the byrrus.

If you remember the paenula, it is considered the ancestor of the chasuble. The paenula was a type of cloak, common in the ancient world for protection against the elements. The paenula was marked by its circular shape that fell around the wearer’s body in a protective cloak like manner. The first mention we have of a paenula being used as an ecclesiastical garment comes from 2 Timothy 4:13. Paul is here asking Timothy to bring his traveling cloak, a paenula, that he had left in Troas.

Above we see the mosaic of St. Ambrose, constructed shortly after his death in 397 A.D. He is wearing an alb, a dalmatic, a paenula, and shoes. This beautiful piece is considered to be a good likeness, owing to how quickly it was created after the bishop’s death.

The lacerna was a cloak was rounded edges so that the bottom was a semicircle. It often had a hood. The lacerna was fastened to the right shoulder or in front, under the chin. It would also be draped over the left arm. 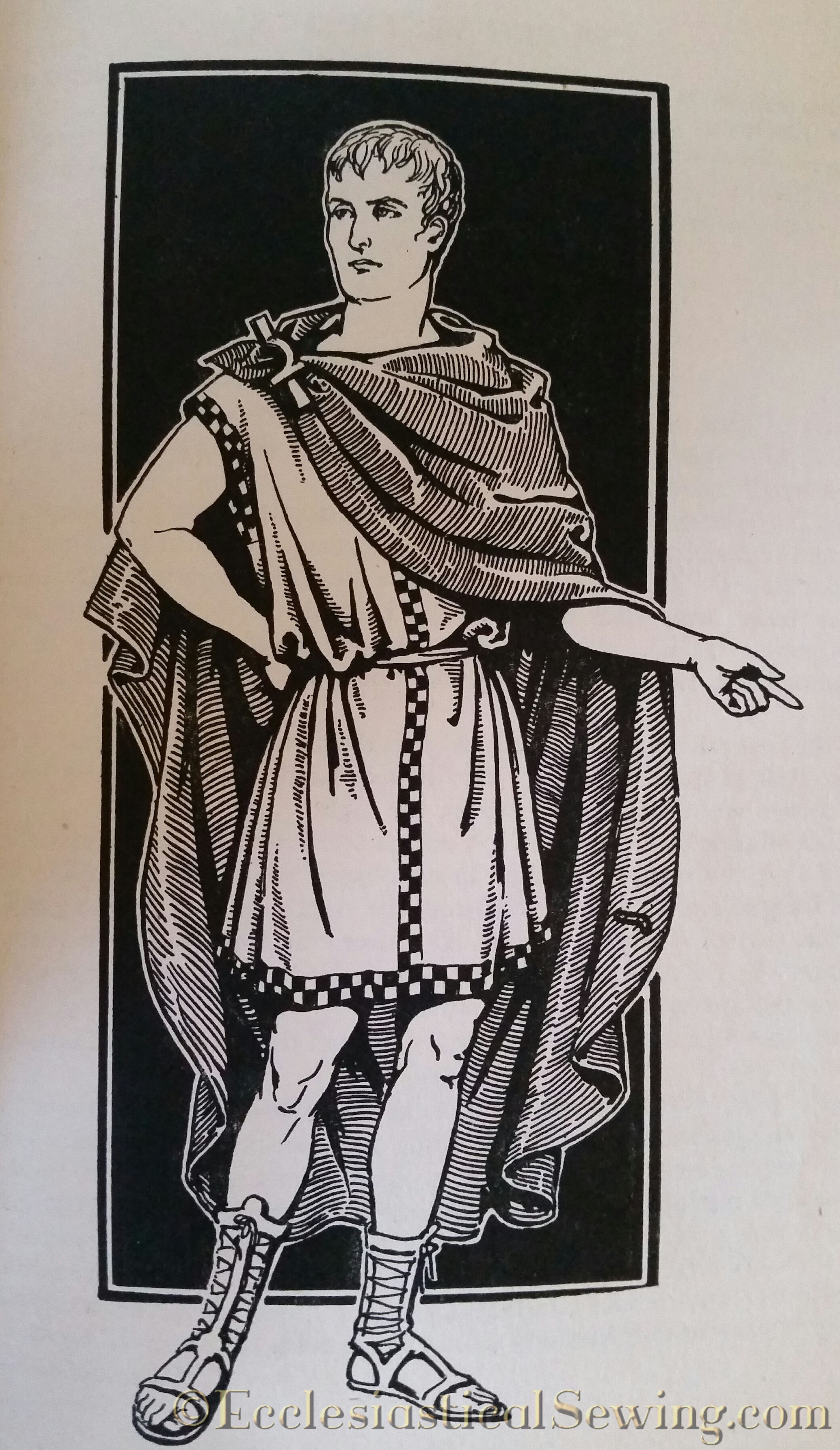 And finally the byrrus, which was a barbaric garment, was just a hooded cape or hooded cloak. The material would sometimes be a heavy felted cloth or a piece of animal hide, tanned or untanned. 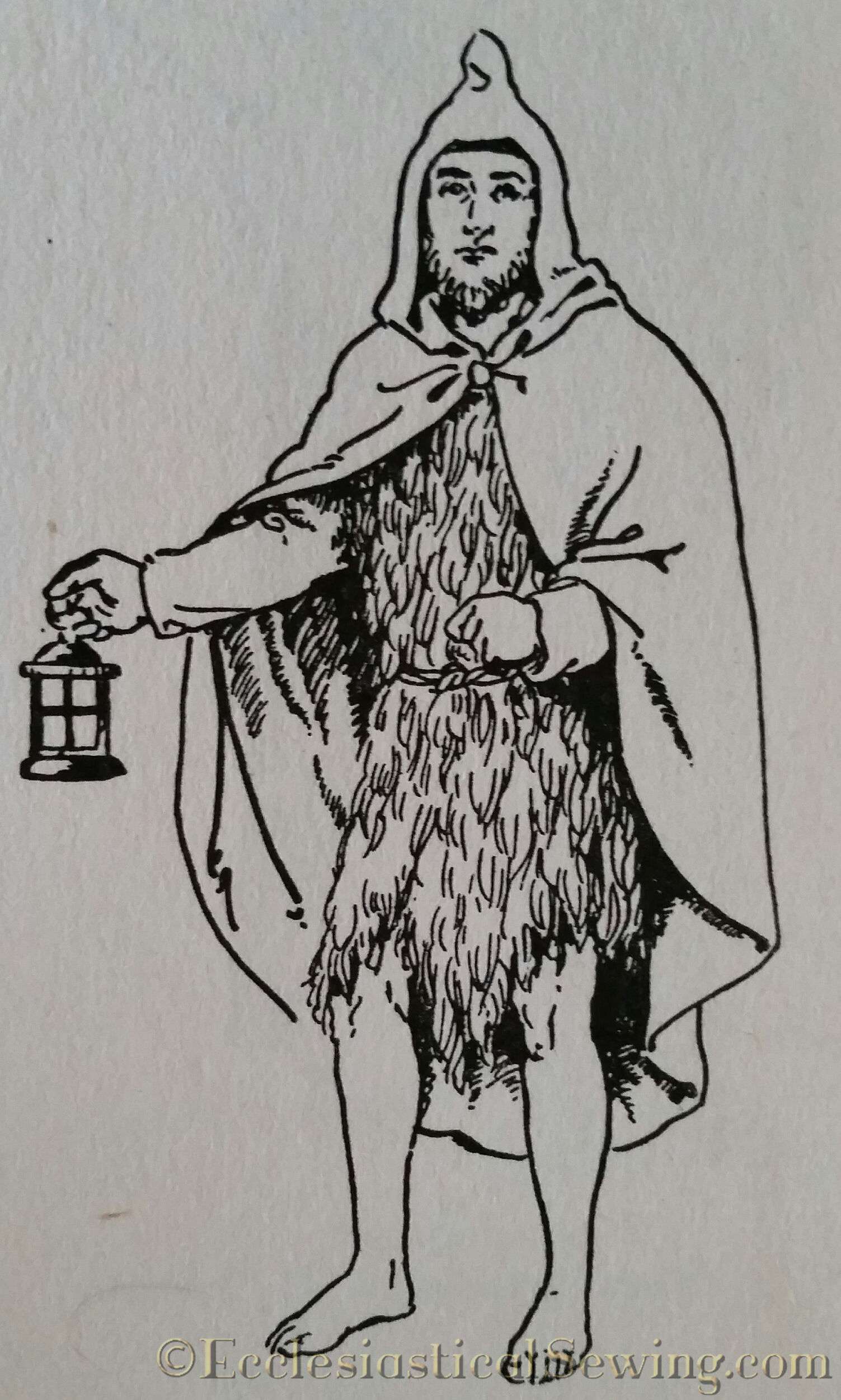 In the fifth century, the byrrus was considered a costly cloak, made of silk or other elegant material. Monks were forbidden to wear it. The lacerna was most definitely made of thicker material such as wool and intended for warmth outside in harsh weather. So whichever garment the cope came from, it took many years, circa the thirteenth century, for the cope to become a liturgical vestment. And since its establishment, it has not changed drastically in form, only in small detail.

A chasuble is a poncho like garment, lying over the member of the clergy and reaching to the knees. Remember, the chasuble is a singular circle or oval piece of fabric with a head hole cut in it, whereas the cope goes around the shoulders. 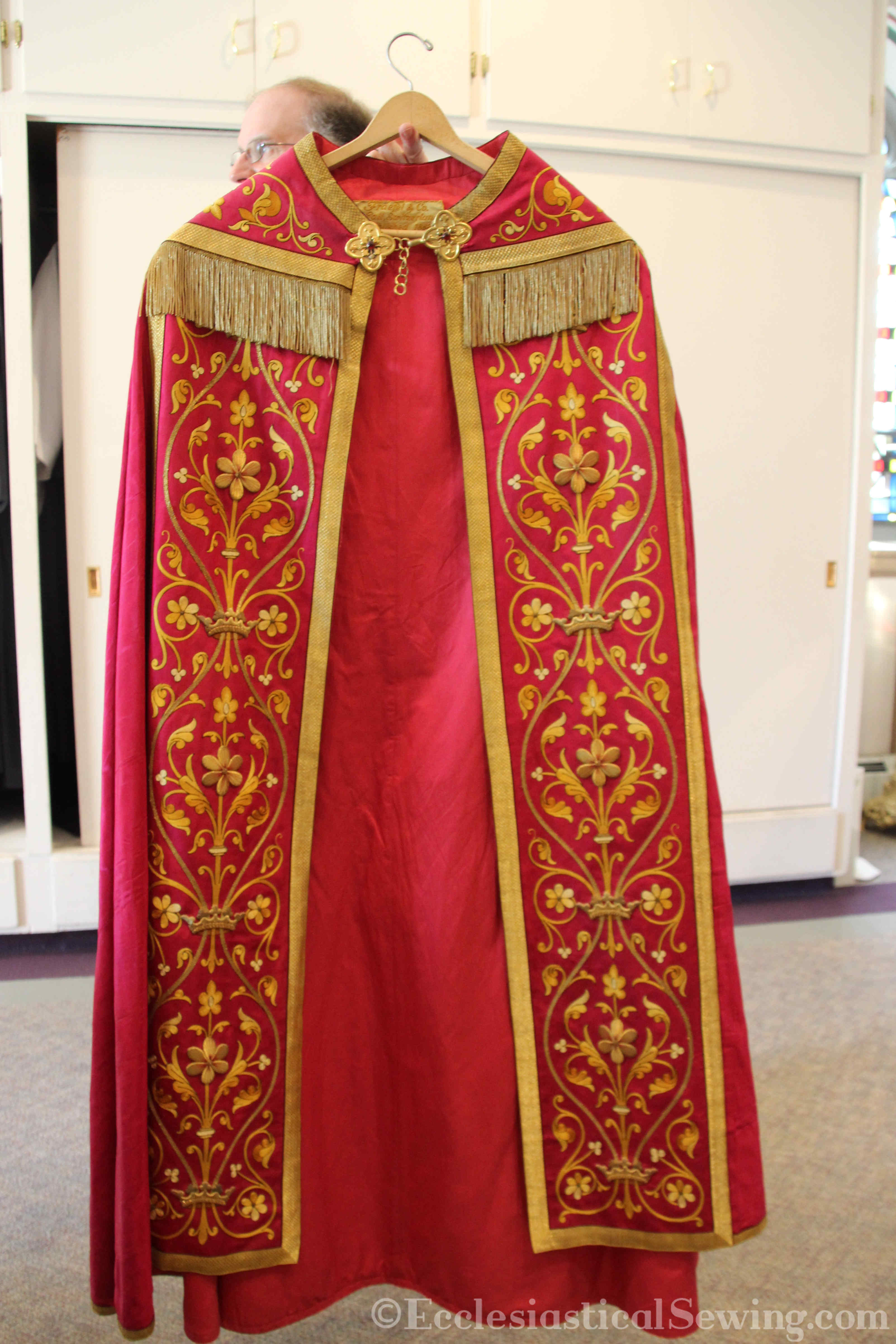 The cope falls to the floor, while resting on the shoulders or above the shoulders to create a peaked collar look. This peak is its hood and can be so grand that it seems like a shield, especially when heavily embroidered.

There are numerous variations of the hood or shield, which include pointed designs, curved, and even a true “hood” style. Cope hoods or shields are often edged with fringe. The fringe used on this cope hood is a bullion fringe made with metallic threads. The cope shield on this hood has a central I H S Design that has been worked with a combination of machine and hand embroidery. 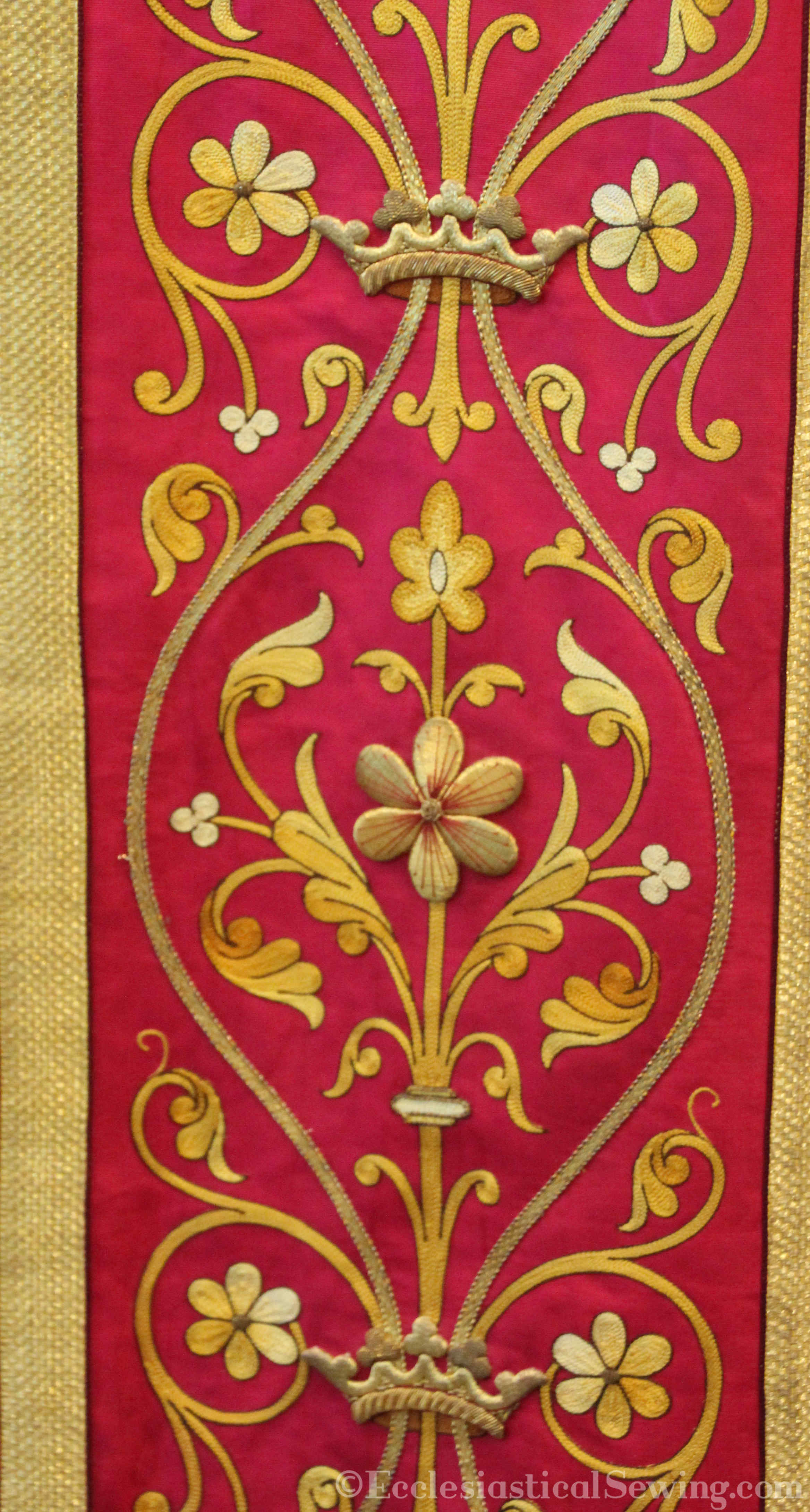 When one takes a closer look at the embroidery on the orphrey band, one can notice that the scroll work is done with what appears to be tiny chain stitches.  This most likely was done by machine – on what might be a Cornley sewing machine. This is a machine that was popular during the last century. The machines can still be found today. The machine stitching is complimented with the crowns and flowers worked in threads for gold over heavy padding. Gold threads also are used as an outline along the edges of the metallic gold looking swirl.

And the cope is an open piece attached somewhere on the chest–some historic images show under the neck, others across the central chest–with a morse. 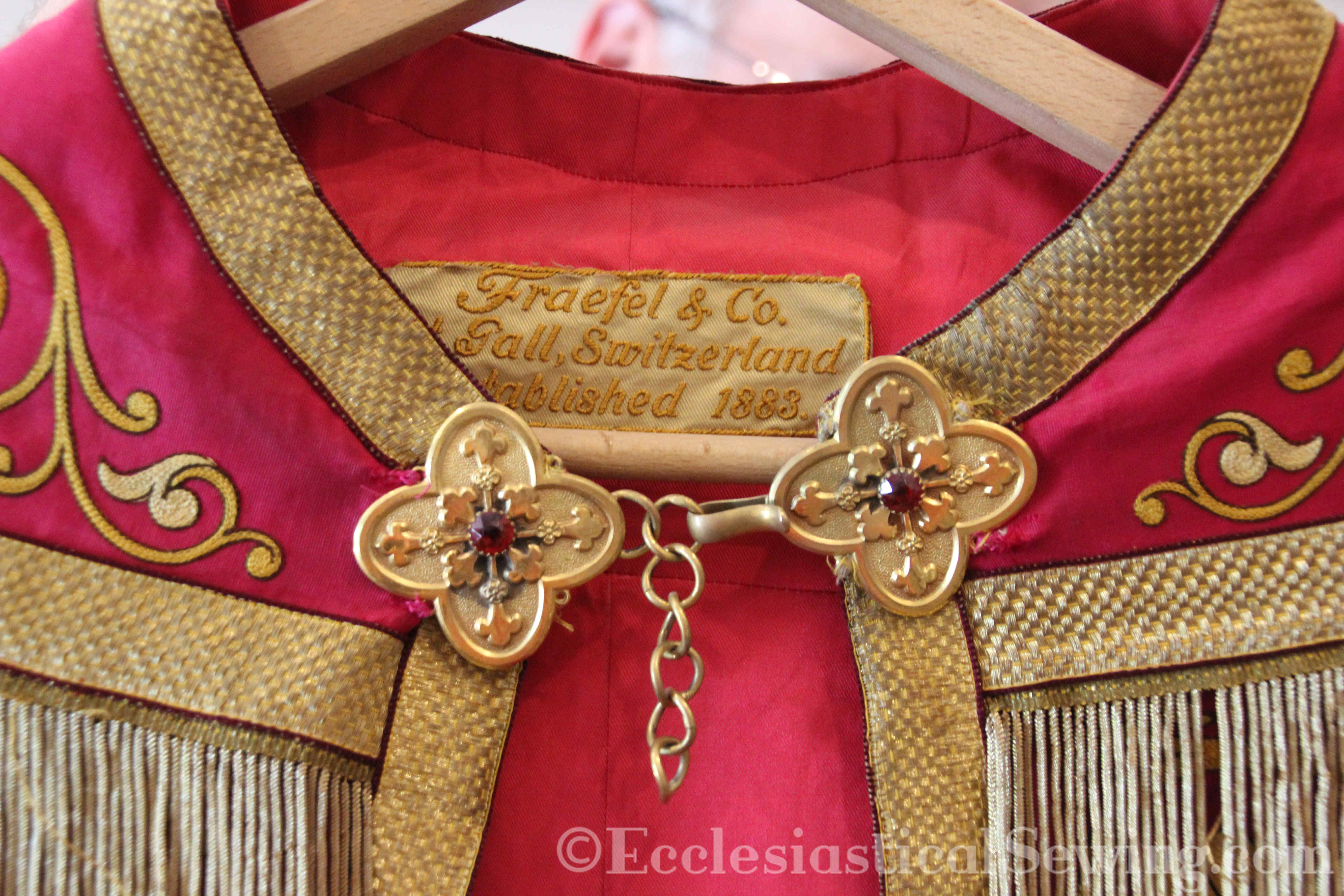 A morse is simply an elaborate and symbolic fastening. It can be made of metal with a chain; it can also be made from fabric that is either simple; or finished with elaborate embroidery. Behind the mores is a garment label which shows the name of the vestment house where this cope was made. It was from Fraefel and company, in Switzerland. The label says “established 1883” which is the date for the founding of the vestment house. Since the St. Helena Cathedral in Helena Montana was begin following the turn of the 20th Century, the garment most likely does not date from 1883. This cope was made from a fabric called watered silk, or watermarked silk. The silk is vivid red, and has a look similar to a modern day moire fabric. This lovely cope is still in use on festival Sundays in the Cathedral.

Watered silks are often difficult to find today. A damask or brocade fabric is a nice choice and is in fact the traditional choice. You can find a nice assortments of Brocades, and damasks woven from a variety of fibers, including 100% silks, silk blends, and cotton and rayon blends at the Ecclesiastical Sewing online store. A damask or brocade refers to the way a fabric is woven; these fabrics can be woven from silk, wool, or other materials. The reason for using a damask or brocade is that it is a material for a higher-quality liturgical vestment. A cope is a garment that must combine enough weight to hang in the lovely folds, without being either too light weight so that it “flows” everywhere or too heavy so that is ends up looking stiff.  When considering the making of a cope, any of the damask or brocade fabrics would be a good choice, as would a number of the metallic fabrics. The metallic fabrics and tapestry fabrics are also excellent choices for use on the orphrey bands, and the hoods or shields.

I hope this helps you in your endeavors to construct one of these lovely ecclesiastical vestments. If you are not making one at this time, then thank you for reading along and enjoying the history and description of this liturgical vestment. For more information, please read the sixteenth chapter in Church Vestments: Their Origin & Development by Herbert Norris.