This is the third and final installment about headwear for this three part series. Already we have learned about the Amice and the Mitre. Today’s vestment is very distinct as regards a certain person. The Tiara or Papal Diadem is also known as the Crown Apostolic. 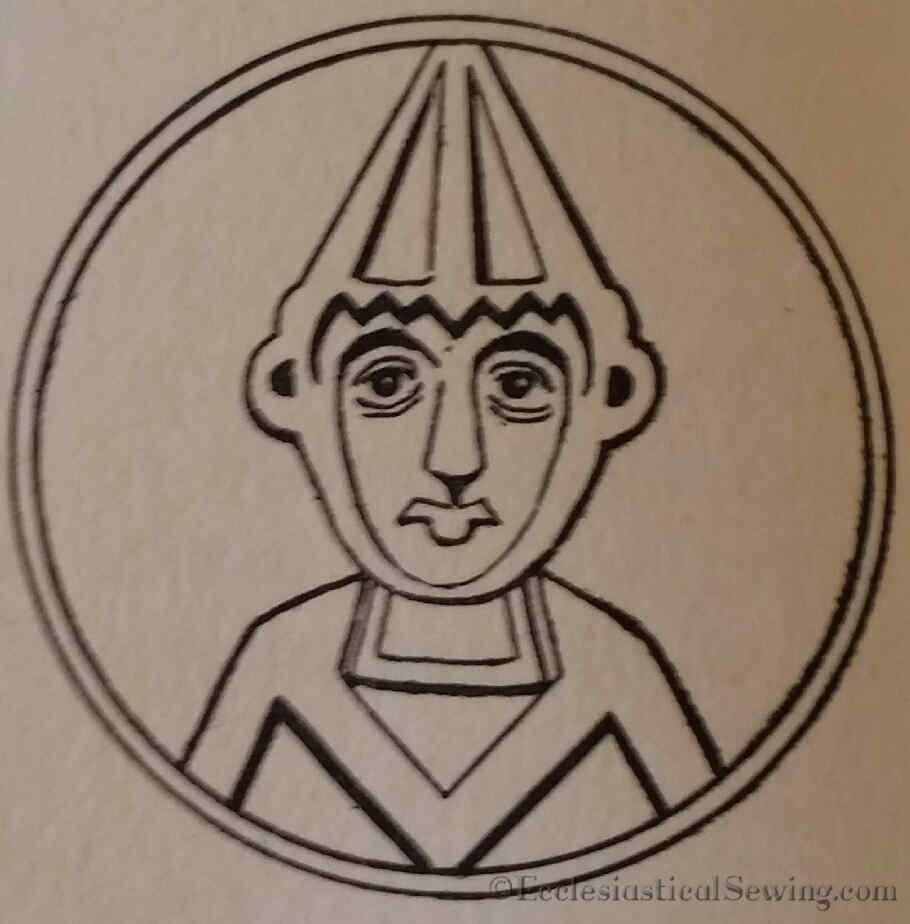 Up until the eleventh century A.D., this ecclesiastical vestment was no different from a mitre. The popes wore what the various bishops wore. The various popes wore a white, linen, helmet-shaped cap. Yet as more bishops began to wear the mitre as part of their official dress, the pope needed something to make him distinct. No one officially started to wear the papal diadem. It is clear, however, that Pope Benedict VII (974 A.D.–983 A.D.) is wearing a tiara in an old coin. The details of this tiara are well-nigh impossible to make out. It seems as though he is wearing a cap over a coif–flaps that cover each cheek.

The eleventh and twelfth centuries saw the head covering being encircled by first a white linen band at the bottom hem and later a cloth of gold band replaced this. In the twelfth century, the pope wore his tiara at his coronation and all state occasions. 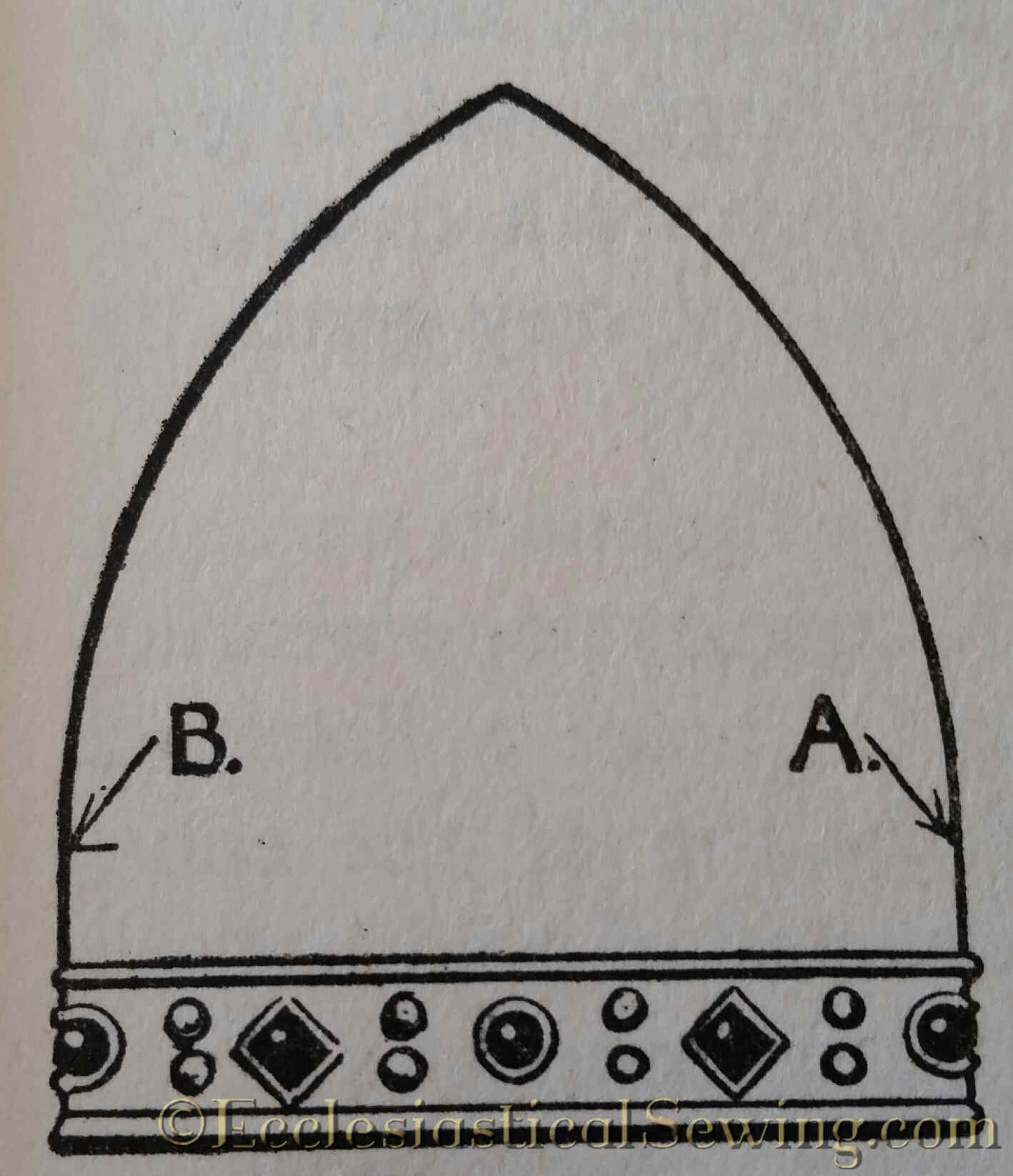 Pope Innocent III (1198 A.D.-1216 A.D.) worked hard to ensure the temporal power of the papal chair. During the twelfth century the circlet became a definite part of the tiara. This was the sovereign power made into a symbol that the popes began to use to show their authority as was bestowed upon them for doing their work on earth. 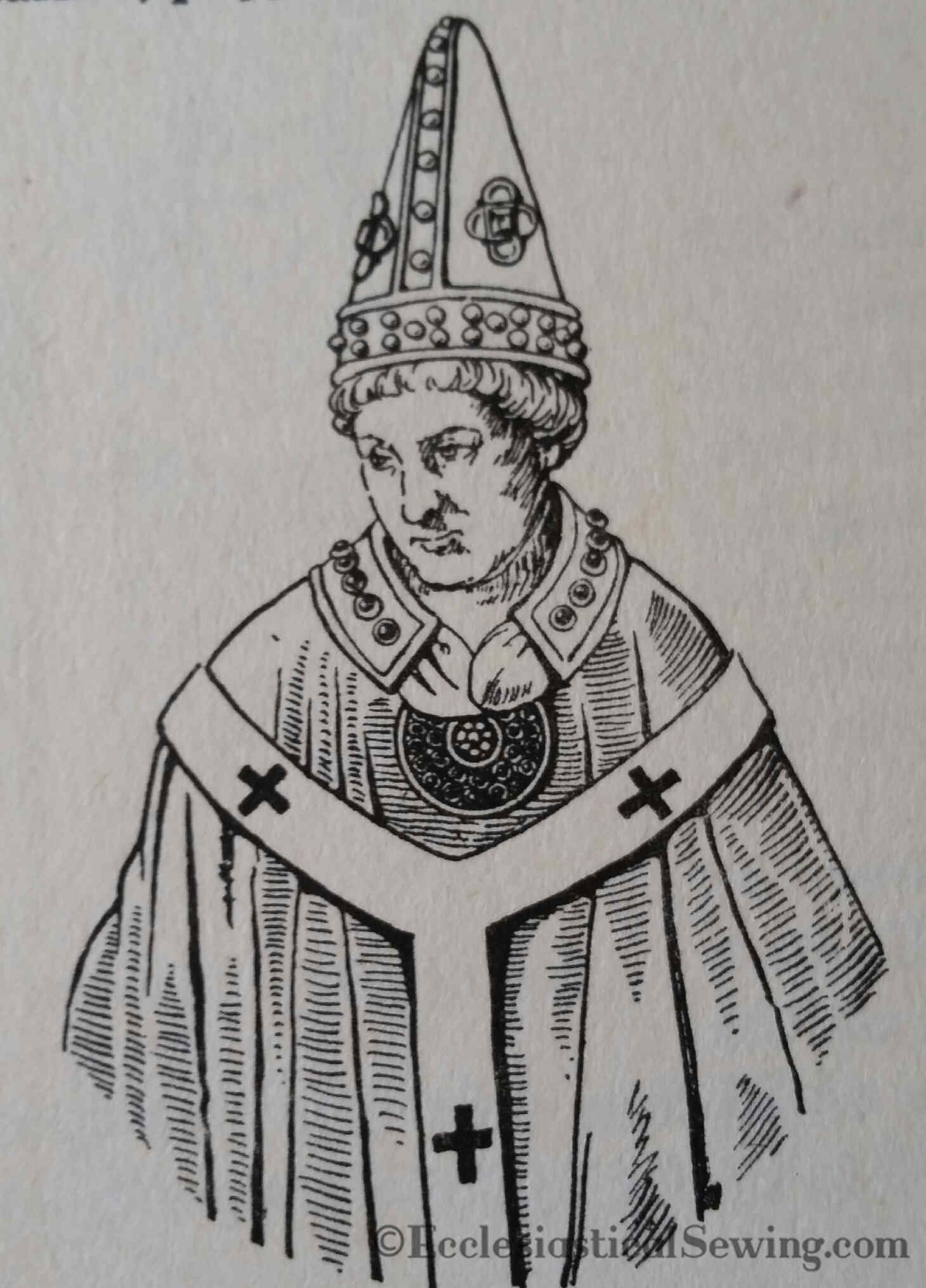 Into the thirteenth century, the tiara began to have a cone shape as it grew taller. The peak of the tiara had an egg shape on the topmost part and the bottom end was decorated with a headband. Various styles also had vertical bands or crisscross bands. These bands were of gold, whereas the actual cap was still of white linen or cloth of gold. Pearls or other gems were used to decorate the tiara. Above, St. Gregory wears the example of a thirteenth century tiara with a vertical band. Below, Pope Clement IV wears a thirteenth century tiara with crisscross bands. Although the mural of Pop Clement IV was destroyed in the Franco-Prussian War, a painting of the mural survived and this painting was used for the drawing included in Norris’ book. In the mural, Pope Clement IV presents Count Charles of Anjou and Provence with the crown of the Two Sicilies.  Clement wears a gold tiara, crisscrossed with gold and red bands. It is decorated with jewels or gold motifs called fleurons. Although Charles conquered Naples and Sicily and was sanctioned their king by the pope, the locals rose against the French and slaughtered them in what is known as the Sicilian Vespers in 1282 A.D. 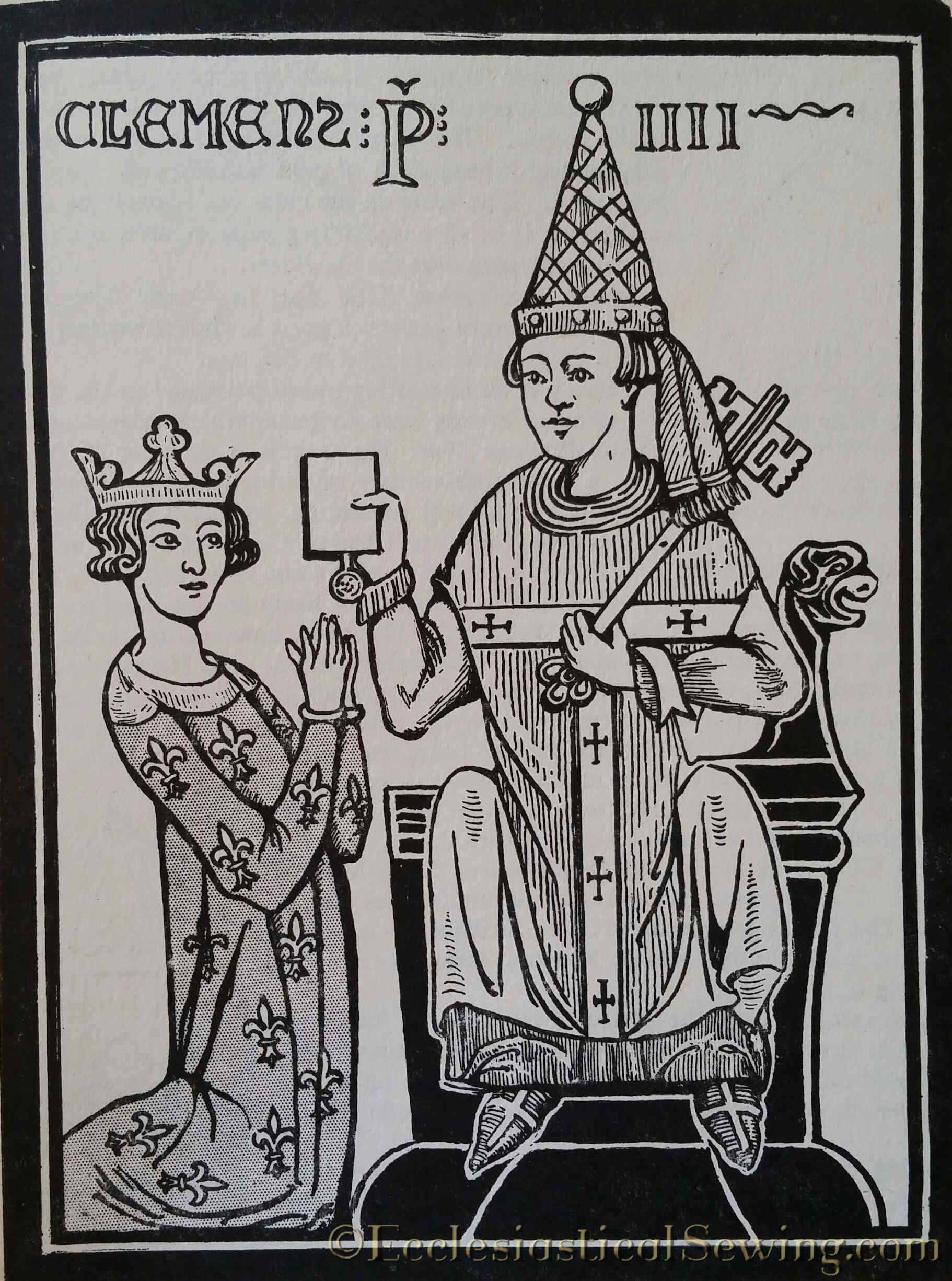 In the fourteenth century, the triregnum began to be seen. This was a triple crown, each crown stacked upon the other. These were heavy ecclesiastical vestments and so were difficult to balance. A cloth coif was worn between head and tiara, first because it made the vestment more secure and second because it protected the head from chaffing, especially if the wearer was balding. The main structure of the triregnum was still cloth of gold or silver, but the elaborate work was all metal or gems. And by the fifteenth century, all popes wore the triregnum for ceremonial events, state occasions, and coronations. 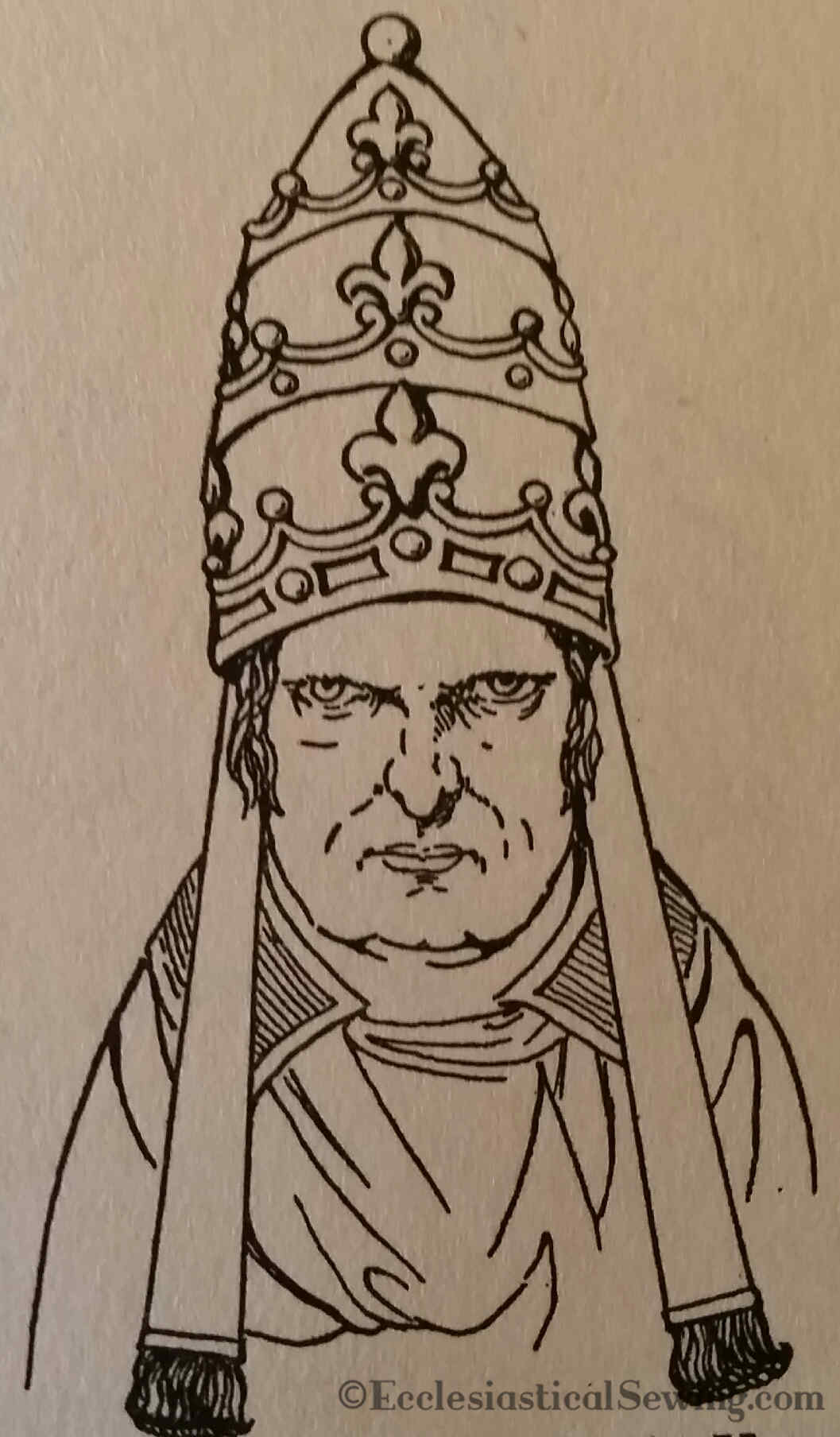 Although this is a very specific piece of ecclesiastical vestment, it is still important to study and learn this history of this particular headwear. The Papal See has historically been an influential office. How fitting that it should use a vestment as a symbol of its power and authority? To continue to learn about this liturgical vestment, please read the tenth chapter of Church Vestments: Their Origin & Development by Herbert Norris.