The mitre is part two of the three part series talking about ecclesiastical vestments that are headwear. Today we again travel back in time to the days of the Greeks. They were not an ostentatious people in the designing of their clothing. For instance, they wore two types of headwear and both were meant for practicality instead of fashion. The working classes–soldiers, sailors, and artisans–wore a skull-cap called a pilos. As the word skull cap suggests, this was a form fitting cap that shaped the skull, snuggly encircling over the hair. The other type was only slightly different. The petasos, a variation of a skull cap, has a brim and a strap. Again this was practical because it kept the sun out of the eyes and stayed on the head when tied tightly. 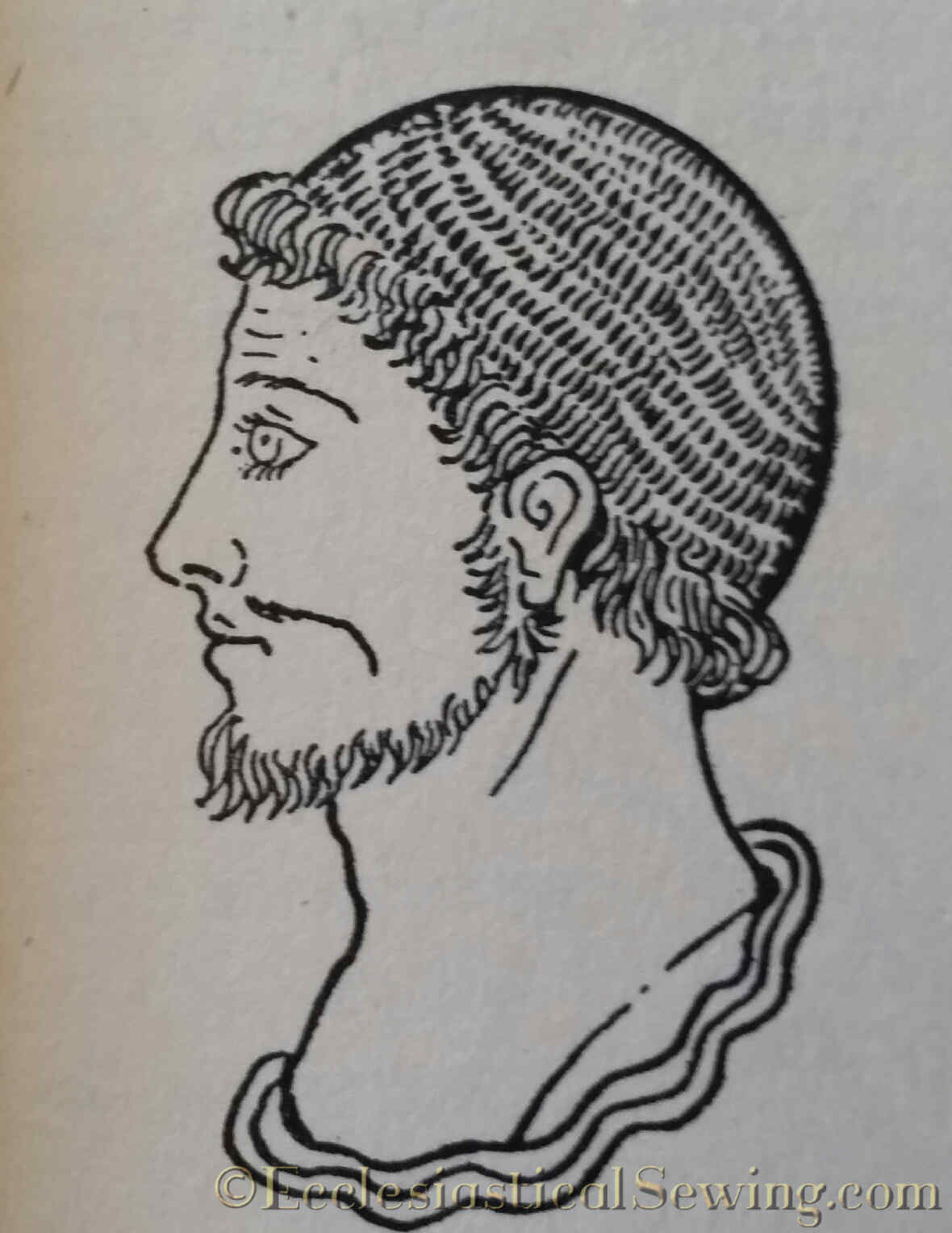 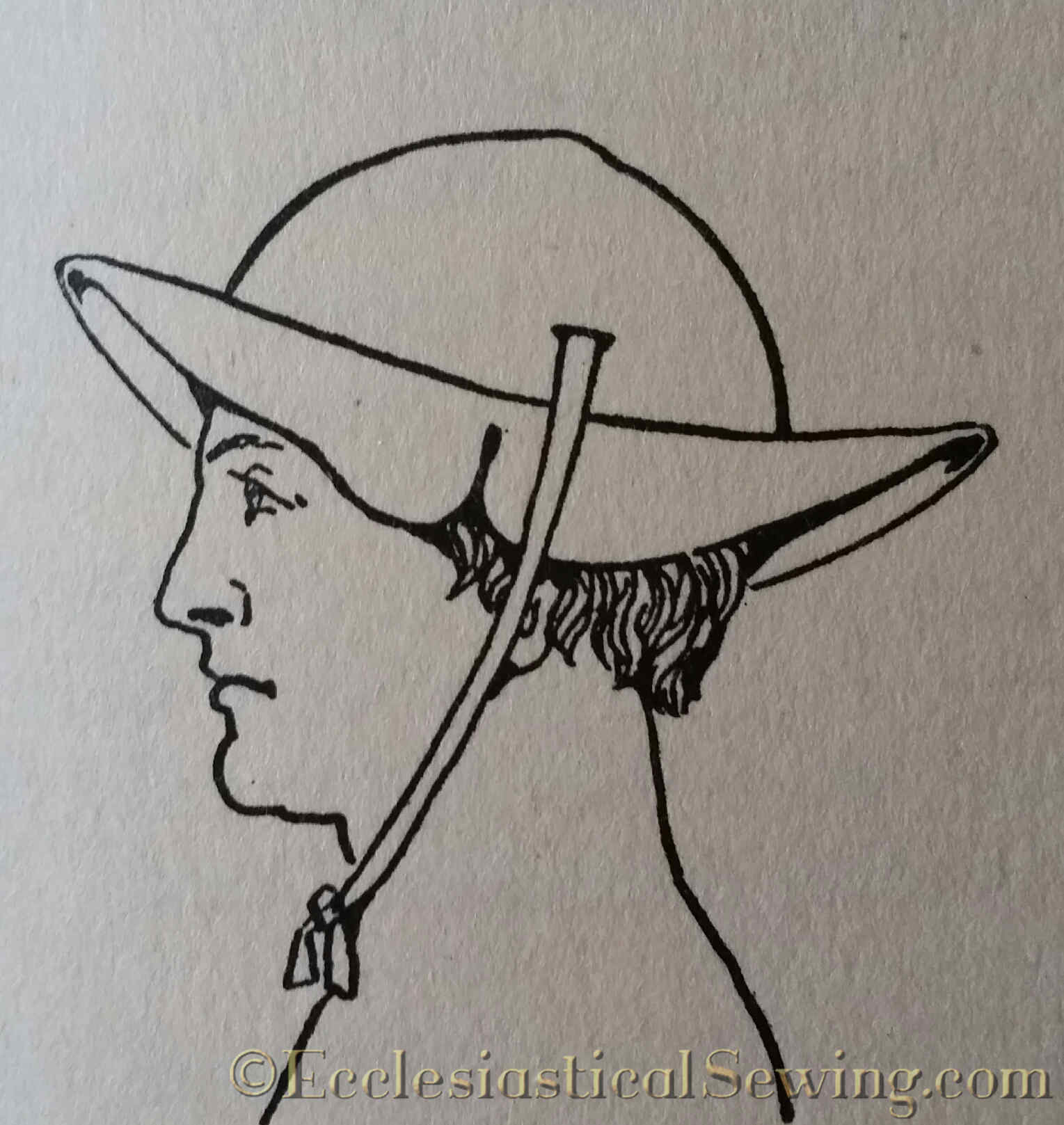 Other than changing the Greek pilos to the Latin pileus, the Romans used this skull cap on an everyday basis. Nothing extraordinary was done to change this skull cap. In the eighth century A.D., the pope, being an elderly man, wore the pileus to protect his head from the cold since it was the common headwear and had been since the time of the Greeks. There is another Greek variation that here needs mentioning. In the beginning, a camelaucum was a pilos with the addition of ear flaps. Warriors would wear these into battle under their helms and the nobility and royalty would wear these, but made of rich material and decorated with a golden band and jewels. Over the centuries, the camelaucum became more the object we think of when we see a typical crown like circlet. 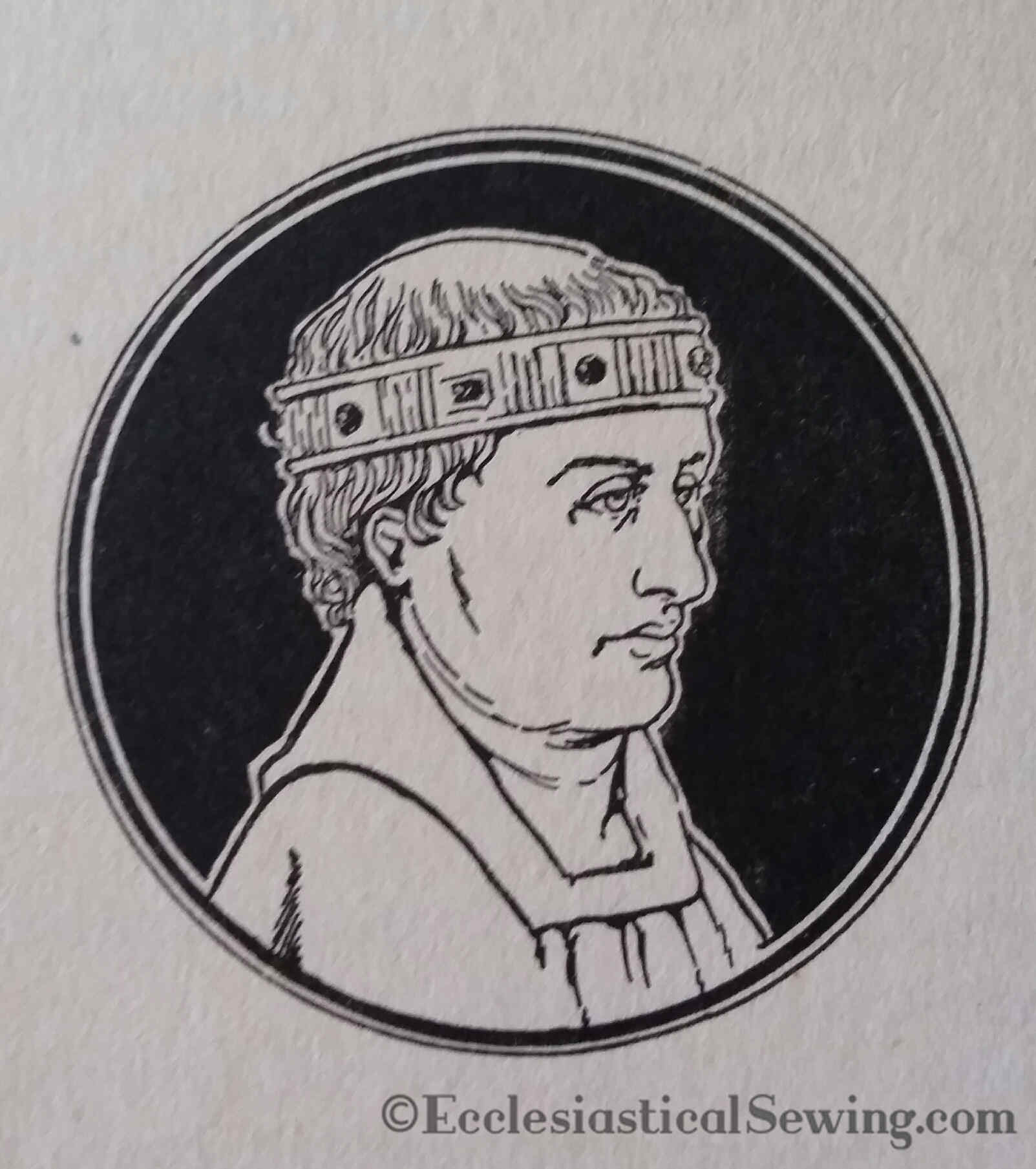 By the tenth century, the camelaucum, when worn by kings, was a crown. The camelaucum, also known as a frigium, began to be used by first the popes and then the higher members of the clergy for processionals only. This white linen cap began to have a stiffened point like a helmet.  This white linen cap–the frigium–was combined with a band of gold–the mitra–became the distinctive mark of the pope, because the combination was unlike any other headdress.

And in the eleventh century, the pope’s combination cap became known as the mitre. The mitre is a white linen cap that is stiffened with parchment–in the modern era, thin plastic or cardboard can be used–and placed upon a stiff linen band. This linen band is then encircled with gold and there can be at the apex a cone of gold. In this century, not only did this special cap receive a name, but the custom of the pope bestowing the mitre on his favorite bishops came into practice. In the twelfth century, the rounded top of the cap began to dip in the middle, due to the binding of a band of gold that ran from front to back. 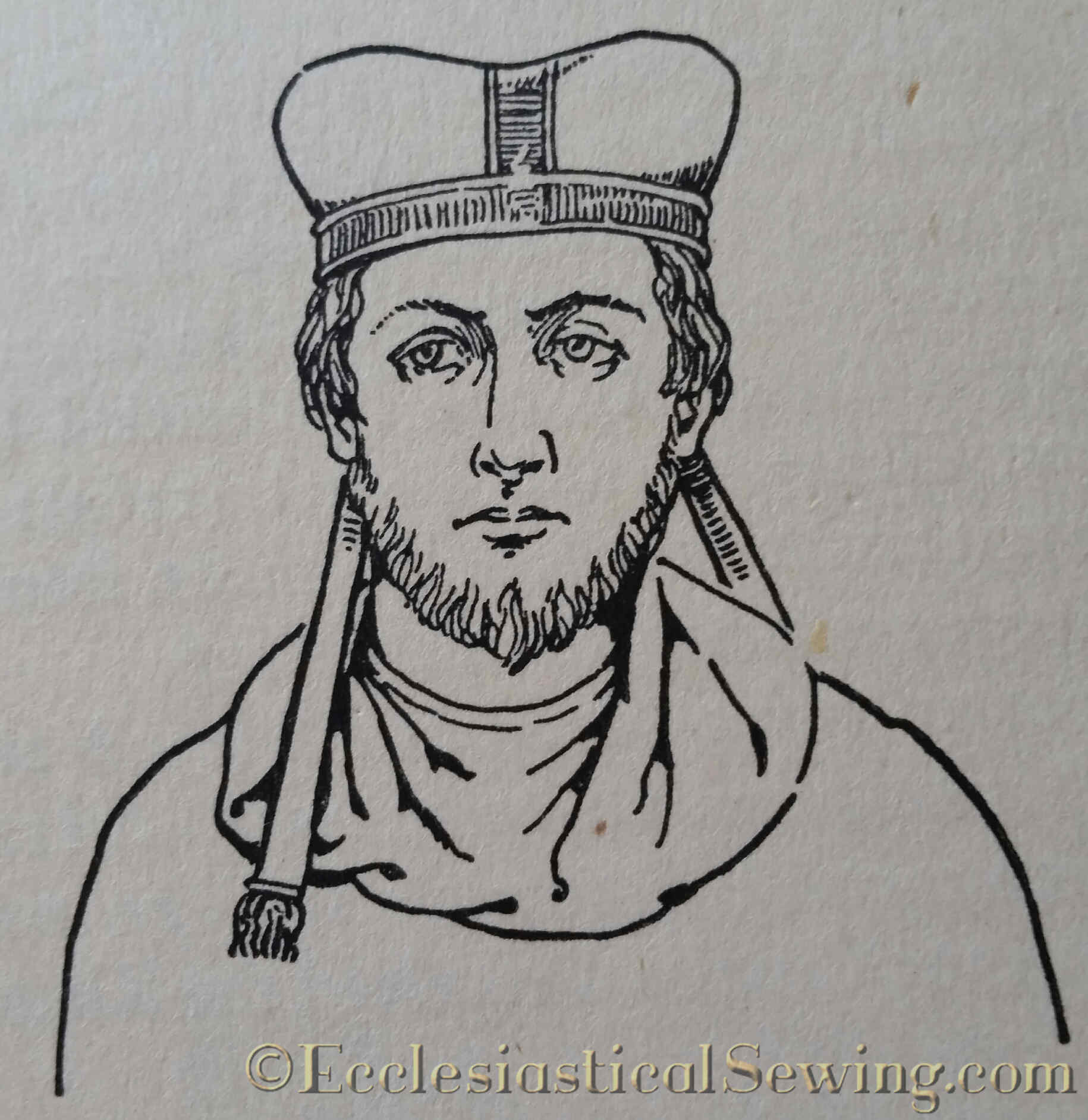 It was also in the twelfth century that all bishops began to wear the mitre, which was received upon the ordination as a bishop. A distinct change occurred in the thirteenth century. The horns that were created on the side of the ecclesiastical vestment became front and back, 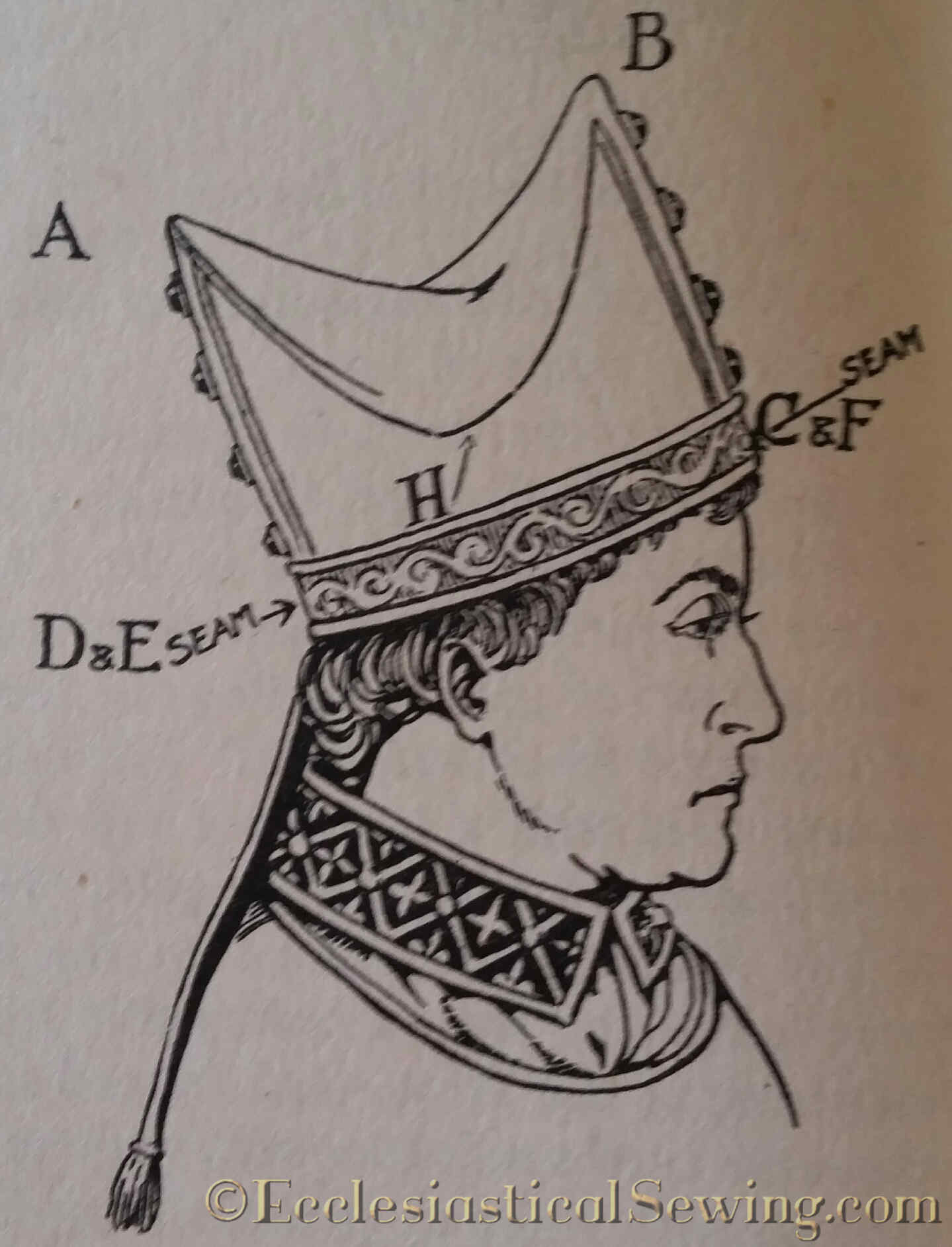 This was the beginnings of the more traditional mitre. As the century progressed, the mitres became more ornate with the choice of cloth and the decorations. And the tops grew taller, which means that sides became steeper. During the fourteenth century this became a most pronounced pattern of ecclesiastical vestments. 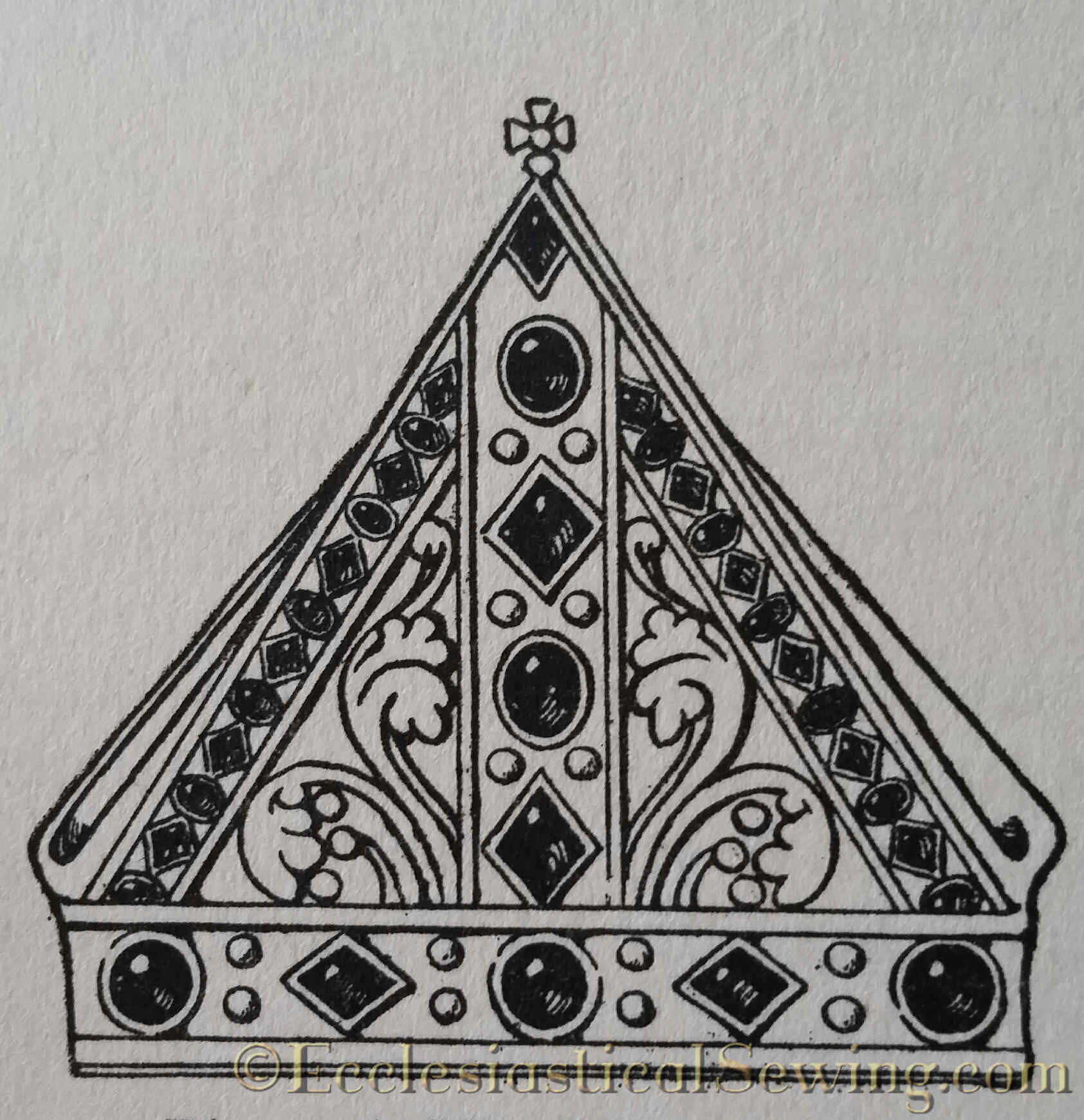 Below we have an example of a fifteenth century mitre. This is a reasonable example, according to Norris, because it is elegant yet proportional.7 This blue silk mitre is lined with scarlet material. There are triangle embroideries, in which are placed various gems. On the smaller golden bands, smaller ornaments are placed. Crockets of gold are placed at intervals up to the top, which is crowned with a cross. 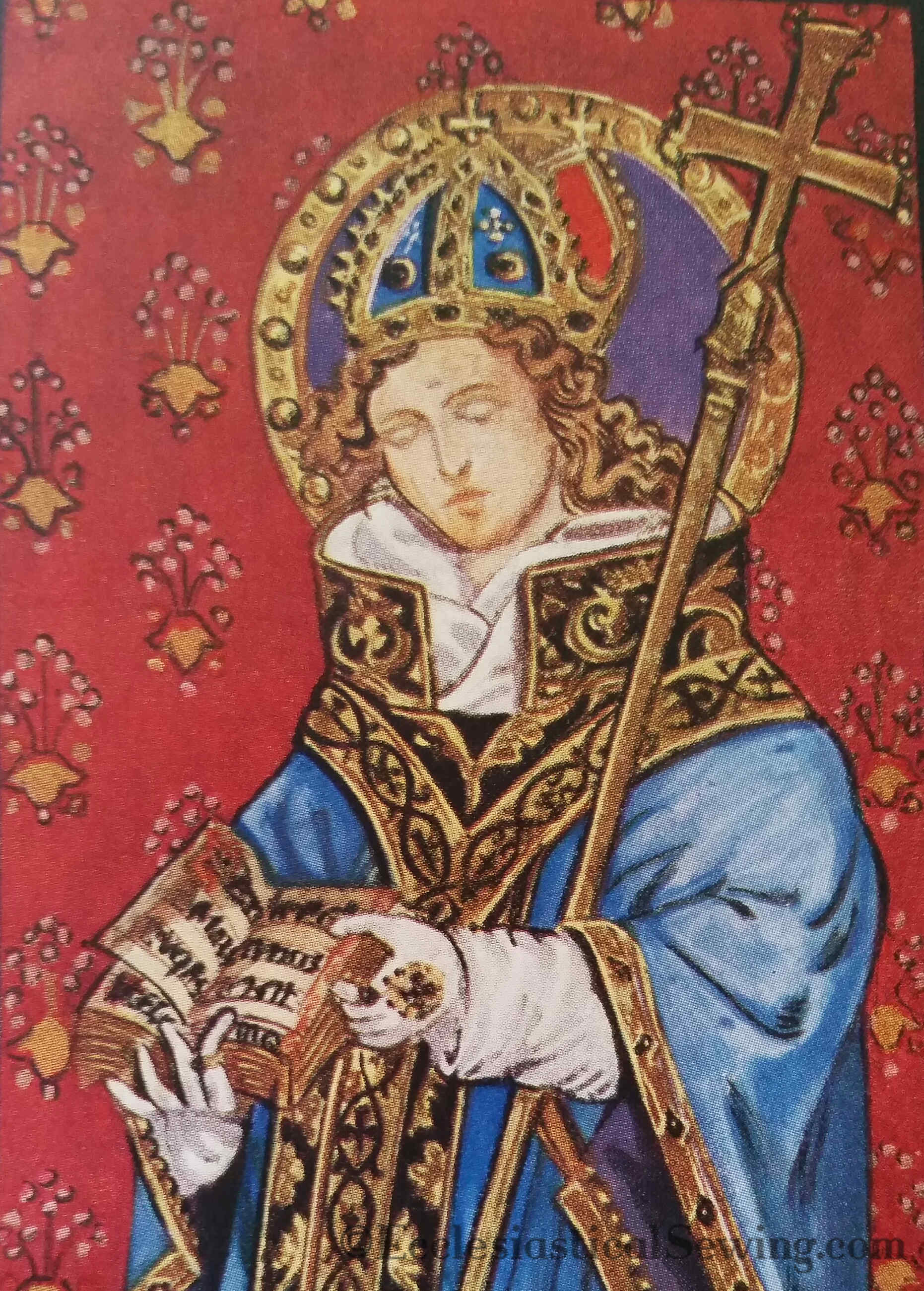 Today several denominations wear a mitre; it is surprising how many have historical traditions of using this liturgical vestment. Those who use this ecclesiastical vestment usually construct a white, gold, or red mitre. Typically incredible embroidery is worked onto the mitre itself and the two lappets–tails that fall from the back. There is much more information on the history of the mitre; to find out more, explore the ninth chapter in Church Vestments: Their Origin & Development by Herbert Norris.