The First Chapter of a New Book

Monday this week was the beginning of the Passover. This is a good time to take a look at some history on Ecclesiastical Dress. Over the years there seemed to be two schools of thought as to the first origins of the garments that are distinctive to us today as those worn by the clergy. Although different authors may call these two schools by different names, a good way to think of them is as the antiquarian and the ritualistic view of history.

Those who support the strict antiquarian side reason that the clothes we see in the liturgy are directly descended from the daily Roman wear. If the early Christians–because they were in hiding and did not have the luxury to stand out–wore regular clothes while worshiping, then those clothes became more ornate, but were kept the same throughout the generations with only small variations to mark various centuries. So that now we have what we see today in worship service.

And then there are those, although few and far between, who adhere to the ritualistic side of the coin. These writers, thinkers, and historians argue that ecclesiastical dress is directly descended from the detailed instructions given to Moses on priestly garments. This means that ecclesiastical garments are indirectly the way they are because of Divine Instruction. Specific instructions were given in regards to what a priest was to wear while serving in the Tabernacle and Temple. No detail or expense was spared in the various descriptions found within the pages of the Torah.

Both of these ideas should be able to show a little ray of truth on the subject. Although many of the books that we have on our shelves talk about the antiquarian view–that vestments came from the dress of everyday Romans–there is enough argument to trace the origins further back. The ritualistic side has merits that are therefore worthy of consideration instead of outright dismissal.

That being said, the book that I am currently reading A History of Ecclesiastical Dress takes the decided stance on the antiquarian side of the debate. I am enjoying this book, because of its organization, writing style, and detail of content. Many of the books we have about vestments and paraments talk about each item, one at a time, or several related items in a chapter. They walk a chasuble, for instance, through its ancient ancestors and the changes that took place over the years in a chapter devoted entirely to chasubles. This book I’m reading now, written by Janet Mayo, starts with the Early Church in the years after Christ and works chronologically through the years. It talks about all the various garments as they come in context with a given era, place, and decree. 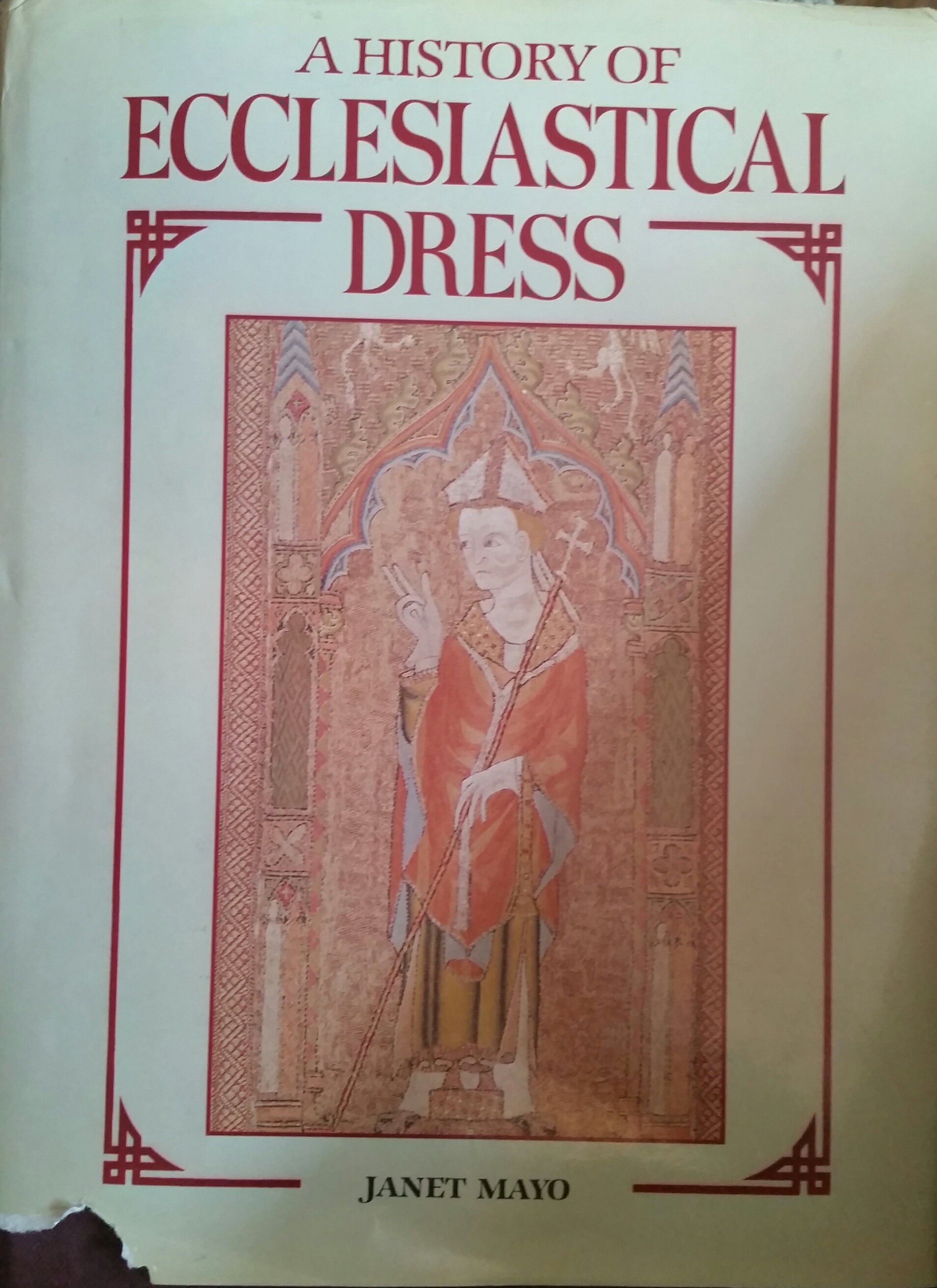 Mayo opens her first chapter by remarking that the earliest of Christians believed that they would live to see the Last Day, Judgment Day.2 They did not take time to set into place a system of ecclesiastical hierarchy, other than what was mentioned in the book of Acts, and therefore did not designate any special style of dress for their members other than clean everyday garments. Mayo takes the argument that the ecclesiastical dress came from the typical garments used by the Romans at this time. And while in hiding, the Christians did not stand out while worshiping in secret.

Therefore she discusses the style of clothes from the Roman Empire through the fifth or sixth century A.D. in this first chapter. The most basic piece of dress was the tunic, tunica. Short tunics were worn by young men and those who did manual labor. Old men and women wore a longer tunic. Although at first considered a woman’s garment, the long tunic became associated with the gods and heroes of the Roman Empire. This divine association gave the garment a certain dignity and was worn by the wealthier classes. Therefore the Church adopted this longer style of tunic because of its dignity. White, being the color of purity, was easiest to maintain with linen as opposed to wool. Linen brightens with washing, retaining its white color, whereas wool can yellow. So a linen tunic is the first and most basic garment for the early liturgical practices. There were sleeveless versions of tunics, tunics with short sleeves, and by the third century there were long sleeves on the longer tunics. The tunic was not always plain. A narrow or sometimes broad stripe called a clavi would be a simple way to decorate a tunic. The longer tunic was known as the tunica alba and from this we get the vestment and word alb. But this did not occur until the later Middle Ages.

A pallium, another basic Roman garment, was a woolen rectangular wrap, similar to a toga. This garment was without decoration except for four small embroideries on each corner. The toga was a politician’s garment, seen most commonly on the senators of Rome. The pallium was worn by the average man, but also by the philosophers and scholars.

The paenula was a heavy woolen cloak meant to brave the storms. We see evidence of Christians wearing the paenula to worship in the second century when scolded by Terullian for taking the paenula off during prayer. He calls this superstitious, because it was the custom of the pagans to do so when they prayed.3

The third century allowed for advancements in the Christians’ Church, probably the result of the respite from constant persecution–although there were two major persecutions in the middle of the third century. During this era, we see the emergence of specific offices in the Church: bishop, priest, and deacon. With these developments came the development of specific garments for use in religion. Clean and pure clothes were a must.

The dalmatic was a richly decorated and un-girded tunic garment, generally longer and with more of a sleeve that the tunic. This garment was worn over the tunic and eventually under the chasuble–the future offspring of the paenula. This garment was worn by deacons–as seen in the 6th century mosaics in Ravenna–, by bishops, and by priests since it was such a general piece.

Another ancient garment is here worth mentioning. The planeta was another outer garment that the chasuble can trace its origins back to; this time more richly decorated. Although many clergy of the early Church were against such gaudy clothing: they argued that the men of God should be distinguishable by their learning and mode of life instead of by their dress.4

Finally, the first traces of the stole and maniple are seen in the sixth century. The maniple began as a practical napkin and one type of stole, the linteum, was worn by the deacon to wash feet while the other sort, the orarium, was worn by the priest as a scarf-like garment for protection of elements and dignity of dress owing to the open neck design of the paenula and dalmatic.  When the deacons ceased to use their linteum for a towel, it was distinguished from the priest’s orarium in that it was worn across the left shoulder. 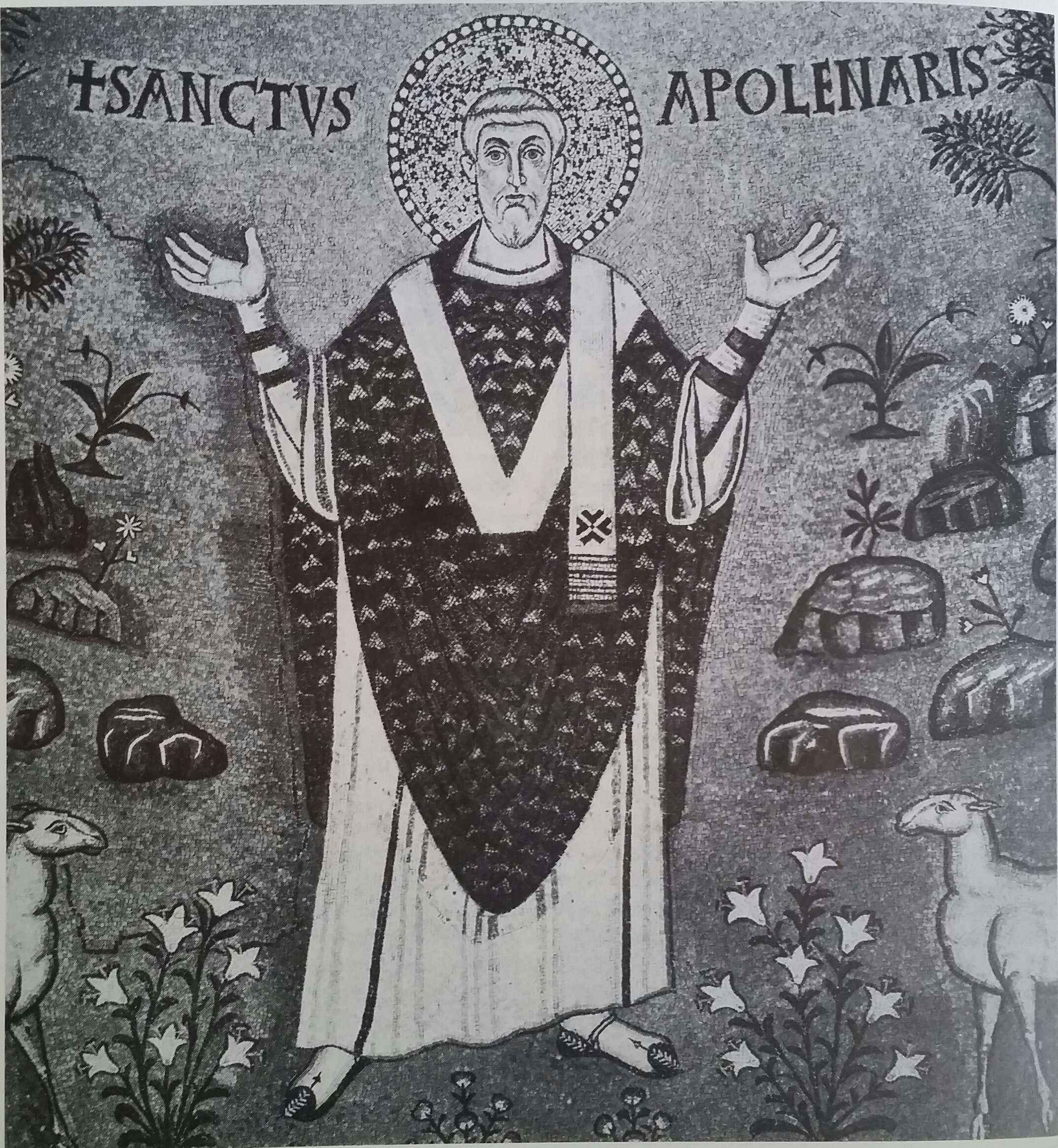 I know that spring is here and many of you are beginning to do other types of work in the warm evenings. However, if you would rather spend a quiet evening inside or if the rain comes and ruins your plans, I would definitely recommend you pick up a copy of Mayo’s A History of Ecclesiastical Dress and read along!