April 25th & The Secrets of Venice

Goodmorning! Tomorrow we have another feast day! This saint is a much better known than the saint we celebrated on Friday. So, as a type of hint, let me ask you this: have you ever been to Venice?

I have had the pleasure of visiting Venice twice, two summers in a row. This year I will not be going to Europe in the summer, since there is a baby due to arrive around the Fourth of July to our Ecclesiastical Sewing Family. I hope–once the baby is old enough to leave with Grandma Carrie–to take my husband to Venice as well as Ravenna Italy. Plans, however, have a way of working out differently than we generally would like.

The last time I was in Venice, summer of 2016, I learned something that I had completely missed the first time. One of the biggest attractions in Venice is St. Mark’s Basilica and the Square in front of it. I figured that the Basilica had been named in honor of St. Mark, the patron saint of Venice. Never did it occur to me to ask why St. Mark was the patron saint. Well on this second trip we were part of a tour, which was conducted in Italian. I was struggling to comprehend everything our guide was saying that whole day; I had to content myself with snippets and pieces of information. The last stop of the day was the Basilica. I had seen the inside before and knew what to expect. (If anyone has never seen this church, please, I am begging you, do visit it at some point in your life.) The lavish detail and the atmosphere, it is like no other church, it is that unique. This tour guide did something unexpected, while I was enjoying this church I love so much. She took our group to the back, where our host bought tickets. I realized that there was an area that was gated off that I had never seen before; this is where we went. Already reverent from being inside a church, our tour guide spoke barely more than a whispered breath as she explained something through the microphones in our ears. I was not sure I was catching what she was saying; it was too fantastic to believe. I asked my friend, fluent in Italian, if I had heard correctly. Yes, I had. Underneath an altar was the sarcophagus of Saint Mark the Evangelist himself. 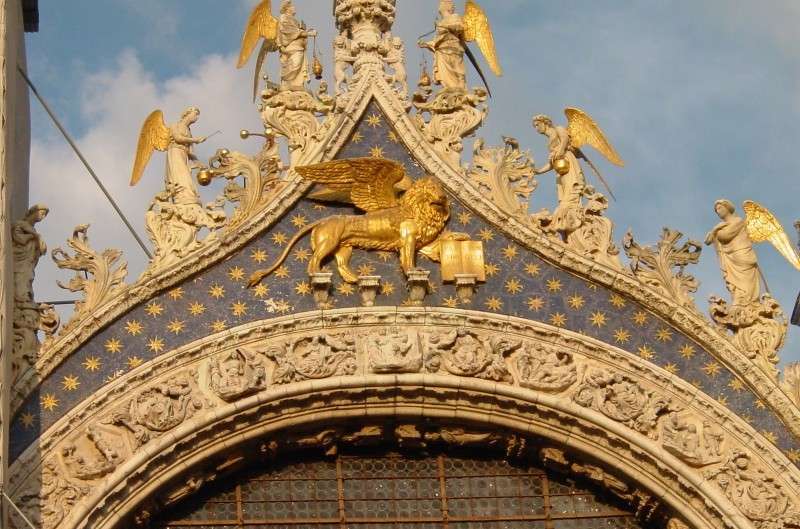 I know that I am silly for having missed such an important detail the first time I was blessed to enjoy this church. I have since learned that in the middle of the 9th century, two Venetian merchants were able to sneak the remains of St. Mark from Alexandria, Egypt and bring them to Venice, where eventually this lovely Basilica was erected. Before his death as a martyr, St. Mark was said to have been the first bishop of Alexandria. And before that, he was the companion and fellow minister to Peter, Paul, and Barnabas. Not only are the Scriptures a wonderful place to look for this information, but another valuable source is Eusebius’ Church History. For instance, Eusebius tells us that Annianus became the second Bishop of Alexandria in the eighth year of Nero’s reign.2 This would have been in 62 A.D., since Nero rose to the throne in 54 A.D. However, when one looks at various dates according to various traditions, it is almost impossible to determine any exact date. For instance, I saw places according to the Coptic traditions that say St. Mark served till 68 A.D., but this was the end of Nero’s reign.

I do enjoy any reason to read Eusebius. The man was incredibly thorough in his research and had greater access to materials than we do now. Just like the remains in the Basilica in Venice, if anyone chooses to debate tradition and staunchly stands against old records or information that has been passed down, it is their loss to be ever so eager to prove things that they make it impossible to believe anything. I personally cannot say that the body in St. Mark’s is his own body. But that is what has been said for many, many years. So tomorrow, on the Feast of St. Mark, I will be wishing that I could be in Venice, at the Basilica. Despite what people may try to argue about the body–or about books like Eusebius–I will always enjoy these things and make the most of them. And ultimately, I will not be stopped from thanking the Lord for the Evangelist Mark.