Upon entering the sanctuary of a Christian Church, those coming to worship immediately have their gaze directed towards a particular object. Placed in the front and center of a sanctuary, the Altar, with its Fairlinens and altar hangings, has traditionally been the focal point inside any Christian Church. 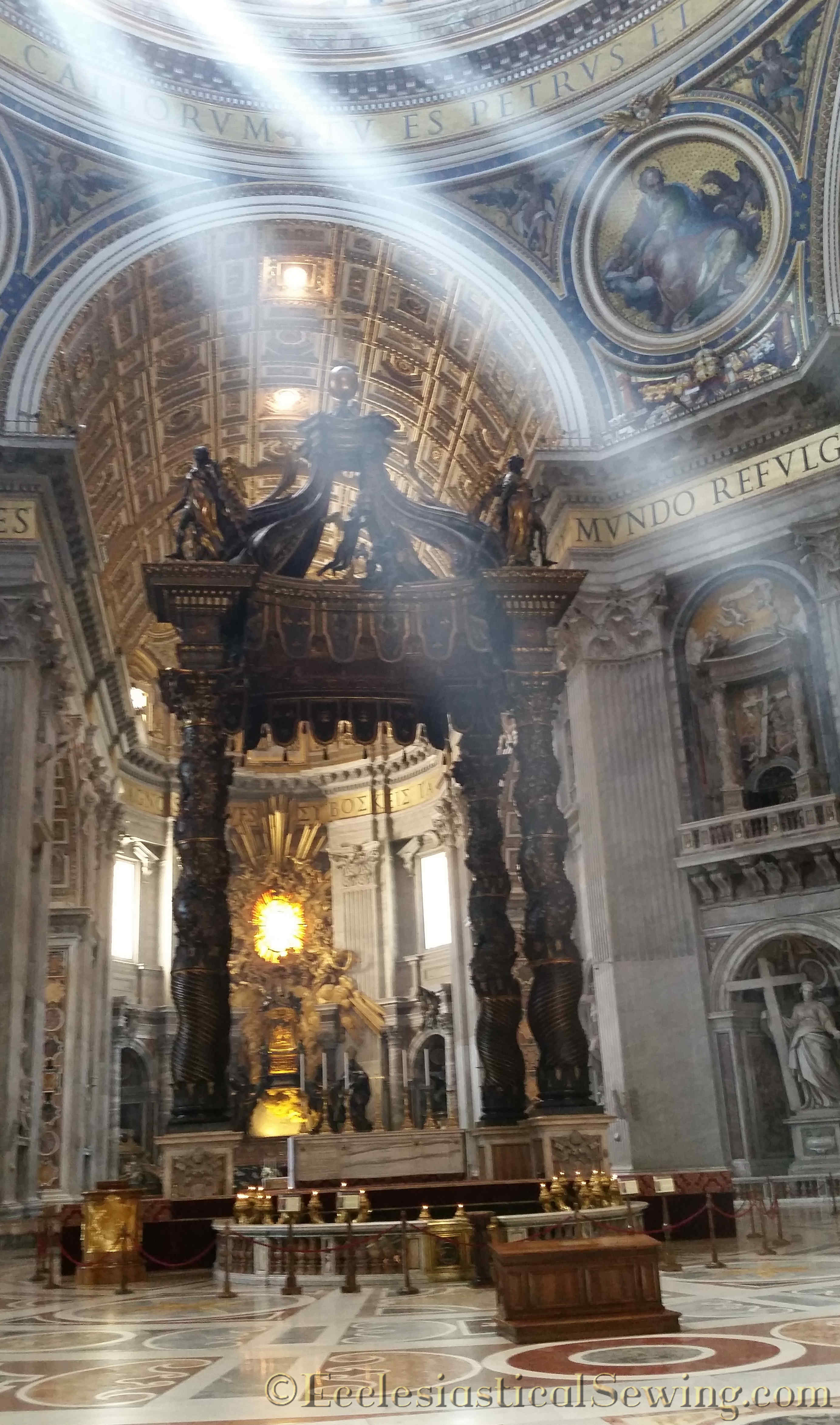 The Christian Altar–that place between earth and heaven–does not owe its origins to either pagan altars or the Hebrew altar. Rather the early Christians used the inspiration of the Last Supper for their design basis, thus making the Christian Altar a Table. The early Christians used tables, in their own houses, for the celebration of the Eucharistic Feast. And so these tables were different sizes and shapes: “rectangular, semicircular, or tripod.”2 Such an image is seen in the Fractico Panis Fresco. Or a variation is seen in one of the chapels of the sacraments in the St. Callistus’ cemetery, where there is a different table used for communion and another used specifically for the altar.

This Fresco is named Fractico Panis–which means “[the] Breaking of Bread”–and is found in the Pricillian Cemetery in Rome. It dates roughly to the beginning of the second century and is therefore “the oldest representation of the holy sacrifice.”4 Joseph Wilpert, the young German who led this archeological exuviation, published a work in German–which was then translated to French, and unfortunately I have not as yet discovered an English translation–about the discovery and symbolism of this and other Frescos in this catacomb. A better understanding of the dogmatic symbolism will be made available to those who read this work. A journal article in The American Journal of Theology is available for purchase about the exuviation of Joseph Wilpert. This article gives a thorough overview of the basic endeavors Wilpert undertook and a summary of his conclusions.

The progression of worshiping in the catacombs to the sarcophagus-altars, which started to appear around the 1500’s, is easy to trace.  When the necessity of hiding to worship ceased, sepulchers of the martyrs or basilicas over the tombs of the martyrs began to appear and come into use. Believers could worship above the crypts, the altar being placed directly above the tombs, and yet still descend into the vaults to “venerate the memoria, the martyium, or the confession at close quarters.”5 Then the practice of placing bodies of the martyrs next to, behind, or under the altar table began to take shape. And this is how the top slab of the tombs became the mensa, the altar. Although there has been great variation of the Christian Altar, today we see a table like object, a mensa, of wood or stone that is supported by a solid base, two pillars, or four columns. Although a reredos can still be seen behind an altar, especially in older churches in Europe, all the essential objects that are needed for worship are in modern times placed directly on the Fair Linen cloth that covers the altar. 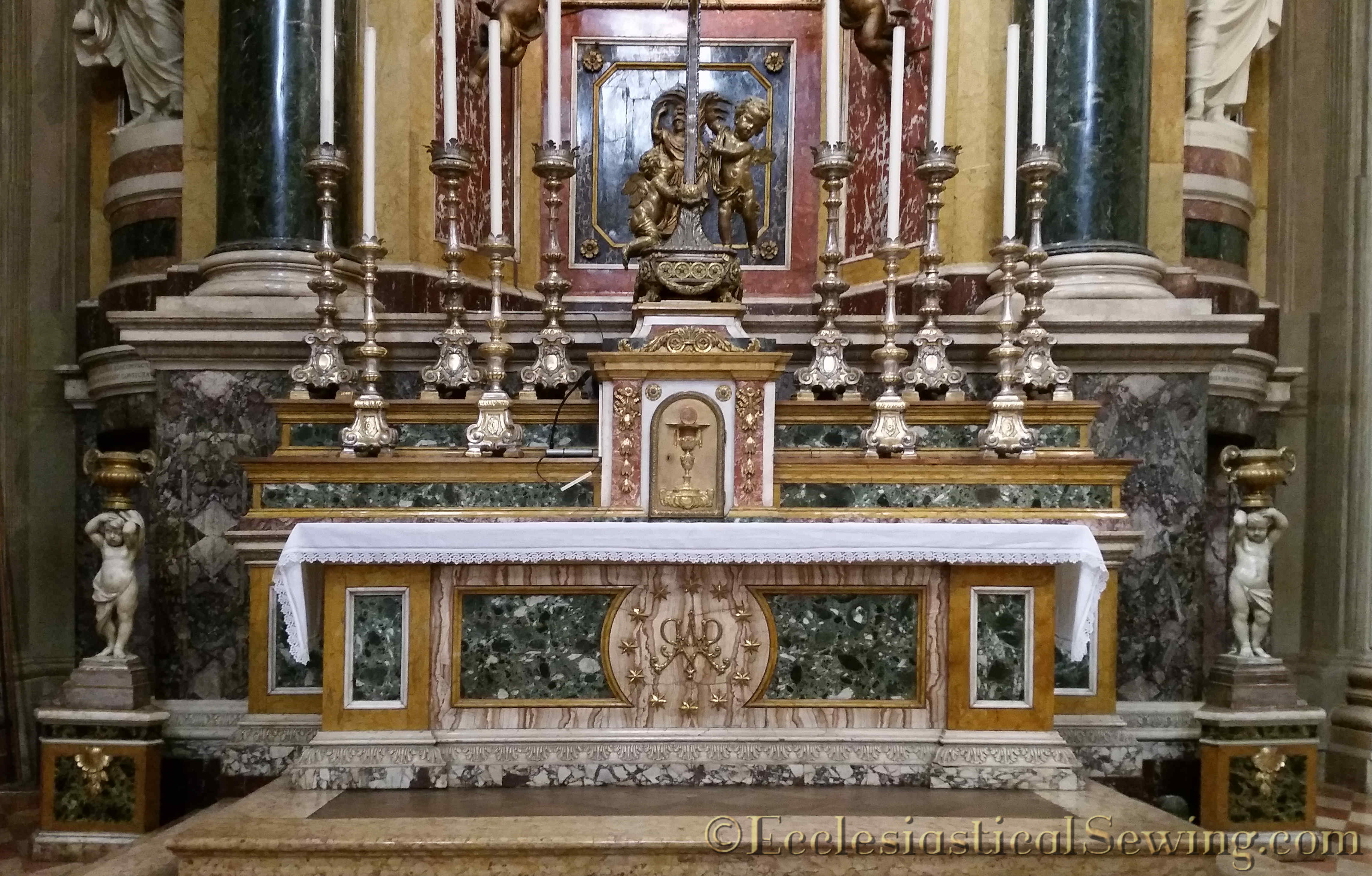 The altar is called “fixed” not because it cannot move, but because the mensa, the top, is sealed to the stipites, the base. Either this fixed or a moveable type of altar can be consecrated in one of the most solemn and moving ceremonies of Christian worship.7 Whenever a new church is consecrated, it is tradition to also concrete the new altar. A cross is traced in the center and each of the four corners on the top slab of the altar; sometimes these crosses are actually carved into the slab. Depending on the denomination, different acts of purification take place such as the usage and sprinkling of Holy Water; a vigil that is held before the actual service of dedication; the singing of Psalms and special prayers; the placing of certain items on the altar–relics, worship objects, or even flowers–; even walking around the altar being dedicated in a certain manner while praying.

Although different practices are in place, this important element of a church is common among nearly all Christians. How each of us uses the altar and its general history are two very important topics to learn about. As much as we at Ecclesiastical Sewing focus on the Church Linens that go over the altar, we cannot neglect to learn about the fundamental feature that our altar linens clothe and cover. For a more thorough reading about this topic, I highly recommend the first chapter in Vestments and Church Furniture by Robert Lesage.