Every year as the holiday season draws near, the weather turns colder, and the daylight leaves us much sooner. Many of us start earnestly preparing for the Christmas season. One great way to celebrate the coming of Christmas is the Christmas Anticipatory Prayer. Or as it is more commonly known The Saint Andrew Christmas Novena Prayer. This is a beautiful prayer about the birth of Christ that can serve as a meditation for Advent. The Saint Andrew Christmas Novena Prayer is customarily prayed up to fifteen times daily from November 30th until Christmas Day.

November 30th marks the feast day of Saint Andrew the Apostle, the first apostle called by our Lord. Andrew, a native of Bethsaida in Galilee, was also a fisherman by trade and a former disciple of John the Baptist. Saint Andrew is also known for introducing to Jesus, his perhaps more famous brother, Peter, and proclaiming, “We have found the Messiah.” Andrew is ultimately said to have been martyred in Greece on a cross in the form of an X. This type of cross, a saltire, has henceforth traditionally been known as Saint Andrew’s cross. 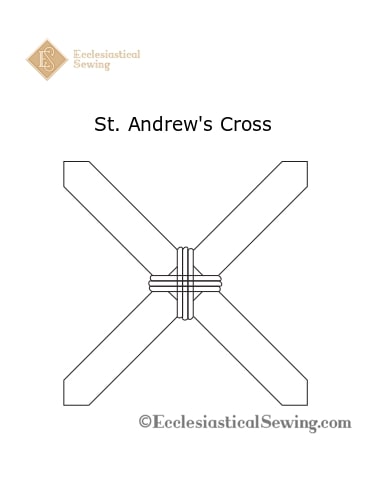 To coincide with Andrew being the first apostle, the feast of Saint Andrew marks the start of a new liturgical year. Therefore, the Sunday that falls nearest the feast day of Saint Andrew is always the first Sunday of Advent. Across the world, there are many traditions associated with Saint Andrew’s feast day as several countries including Russia and Scotland, who consider St Andrew their patron saint. In fact, the flag of Scotland features a saltire or X-shaped cross, to commemorate the shape of the traditional Saint Andrew’s cross.

For many centuries, weddings were not allowed during Advent and Christmas. Because of this tradition, Saint Andrew has often been known as the patron saint of unmarried maidens. In fact, many countries have superstitions about marriage connected to the feast day of Saint Andrew. In many Slovakian countries, a pasta dish called Halushky is cooked on this day. Unmarried girls are supposed to place slips of paper with the names of single young men in the dish. In England, the feast day is often celebrated with the drinking of elderberry wine and the serving of a special cake called Tandra Cake, which consists of a bread dough base with lard, sugar, currants, lemon peel, and eggs.

However, the most popular tradition associated with the feast day of Saint Andrew is the Saint Andrew Christmas Novena. While the exact origin of the prayer is unknown, we do know that the prayer is well over 100 years old and likely originated from Ireland. The words of this beautiful prayer are included below. 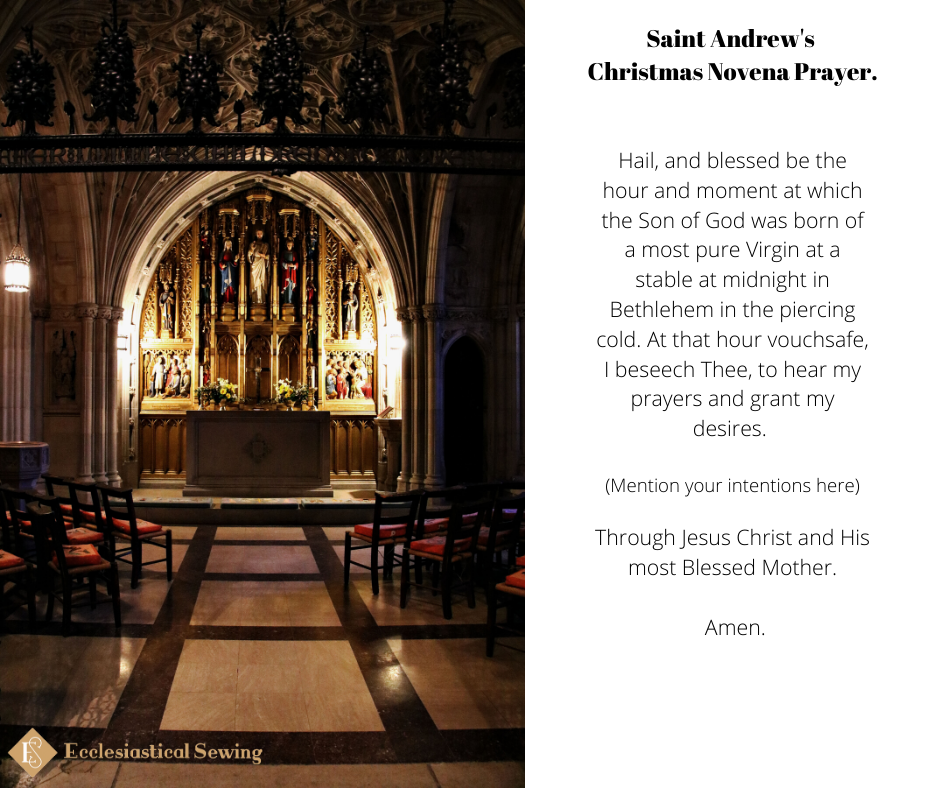 Although this prayer is labeled a novena prayer, a novena is normally only a nine-day prayer. The term novena is also commonly used to refer to any prayer that is repeated over several days. Because prayer is very much an essential part of the Advent season, perhaps this is why the Saint Andrew Christmas Novena is so much different than a traditional novena. Traditionally this prayer is said fifteen times per day from November 30th until Christmas. You can say the prayer fifteen times all at once or divide it up throughout your day. It can also function as a family devotion during Advent where it can be a great way to help focus children’s attention on the Advent season.

While the prayer starts with the feast day of Saint Andrew, it never addresses Saint Andrew but is rather said directly to God. The focus of the prayer is a request to God to grant our request in honor of the birth of Jesus at Christmas. The opening words are meant to transport us mentally and spiritually to exact moment of the birth of Jesus, on a cold night in Bethlehem in a stable. The prayer also draws our focus to many of the great moments in the life of Christ, namely his conception, his birth in Bethlehem and through reference to “Our Savior Jesus Christ” a focus on his death, resurrection and ascension.

Finally, in the last parts of this prayer, we see the use of one keyword not common in this day and age but extremely significant to the meaning of this prayer, the word “vouchsafe”. Vouchsafe generally means to give or grant as a favor and in the final parts of this prayer, we ask that God grant us a favor and grant our desires, not through our merits, but through the merits of Jesus Christ and the Blessed Mother. Because the prayer asks that God grant our request, it is often believed that whoever can recite the Saint Andrew’s Christmas Novena Prayer fifteen times each day from November 30th until Christmas Eve will obtain the request that they asked for.

The Christmas season brings with it a set of decorative colors common to the holiday which often include red, green and white. It also brings with it, many changes to the colors and decorations of vestments as we enter the holiday season. Common vestment colors include violet and rose during the season of advent and white on specific days related to Christmas. Blue and gold colored vestments are also used during advent and the Christmas season in certain traditions. The feast of Saint Andrew’s marks the beginning of the Saint Andrew Christmas Novena Prayer but it also sets up the beginning of a new liturgical year and with it a great chance to select the vestments and supplies for your church setting that highlight your communities faith and devotion. At Ecclesiastical Sewing, we can provide everything needed included fabrics, altar linens, patterns, stole kits, vestments and many other items for your worship setting.

Without further ado, we have a new embroidery design that we would like to show you. Below are pictures of the Saint Andrew cross that is part of a larger set of designs. We encourage you to plan ahead and contact us about making vestments for future church seasons. This will make a lovely set; someday we will have it embroidered so you can see it worked on fabric. 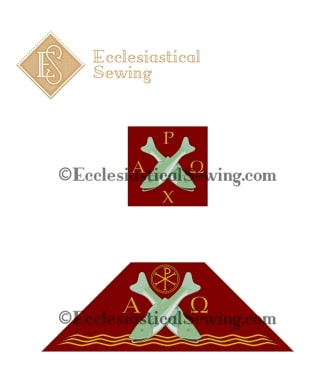 Have a blessed first day of Advent tomorrow, and Soli Deo Gloria!