There were no end of fluffy blankets in the office. With a bathroom hand towel, I dried the cat, before bundling it warm. As I considered the wee creature’s sleek sides, I wondered if it was eating enough. Moving to the refrigerator, there weren’t many feline friendly choices available. Since there was no
microwave, I was forced to run some half-and-half coffee creamer through the Keurig. It came out too
hot and so I added cold cream to bring the temperature to lukewarm, testing it on my fabric arm like the
mothers in stores did with bottles.

The cat meowed appreciatively, and set to work lapping up the bowl.

The Keurig, however, was a mess. I concluded the only viable option was to run water through it. Placing
a coffee mug underneath, I ran a bottle of water through the machine. After the second cycle, the water
came out clear, and by the third time, I was certain crisis had been averted.

The cat, having finished her cream, trotted away.

By the time I cleaned up the small dish, it was well after midnight. Sighing, I dropped into the high-backed chair. I checked the fake email I created and found no responses to the ad about a mannequin
for sale. But, as I erased the search history and scraped the VPN clean, I pulled up the internet browser
that Carrie had her accounts logged into. I’d been snooping about the kind of business I now worked for
as a mannequin. Church vestment and parament making were a far cry from haute couture in terms of
secular prestige. However, the rich history and deep symbolism captured in the art were utterly
fascinating. There were shelves of books on the far wall filled with information telling the origin of
various garments. And the fabric on the opposite side of the studio, a lot of the patterns were centuries
old and steeped had powerful significance. Tonight, I continued to read about the different types of
garments they dressed me in, learning the different names so I could at least know what kind of pose or
attitude was necessary for modeling the garments. 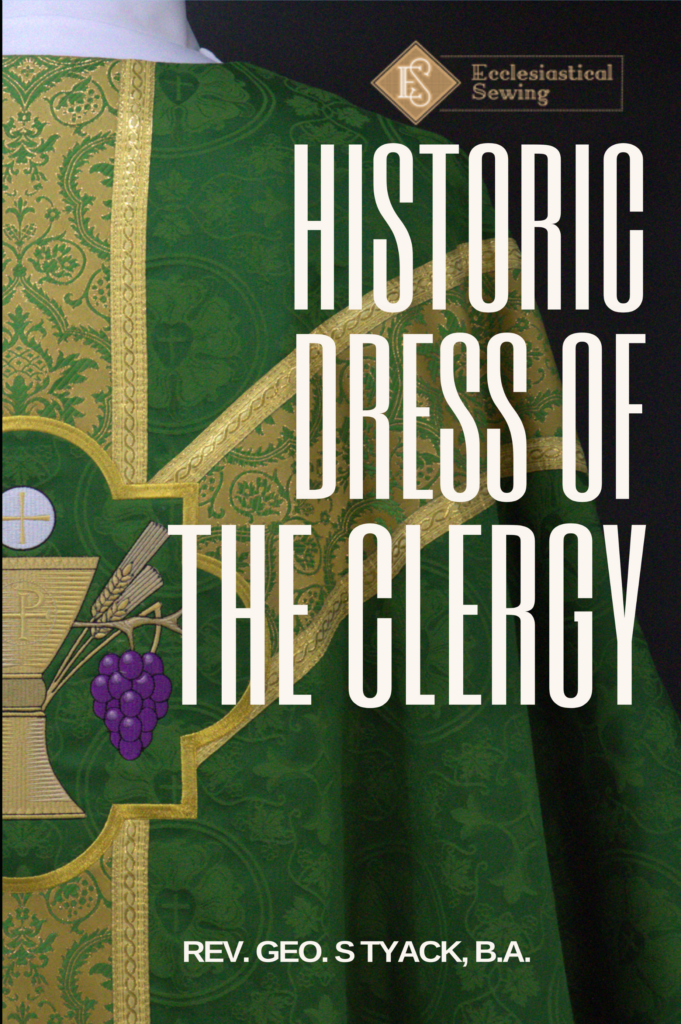 An email flashed in the corner of the browser.

Travis, the son-in-law, and early morning employee, had responded to an email Carrie the owner had
sent at ten. Apparently, with the snow, they’d decided to not come in tomorrow—today. And if things
continued as forecasted it would be Wednesday before they came in. There were no pressing orders, but
they would have to make up for lost times with the embroidery machines. Travis had said it wasn’t a
problem.

I leaned back in the chair and blew out a long breath. It was just after midnight Monday morning, so I
would have the next two days all to myself in the studio.

What a nice little vacation this February snowstorm was making.

Clicking out of the internet, I reached for one of the church symbolism books. Paging through the
designs was peaceful. There was no hurry to do any work…. 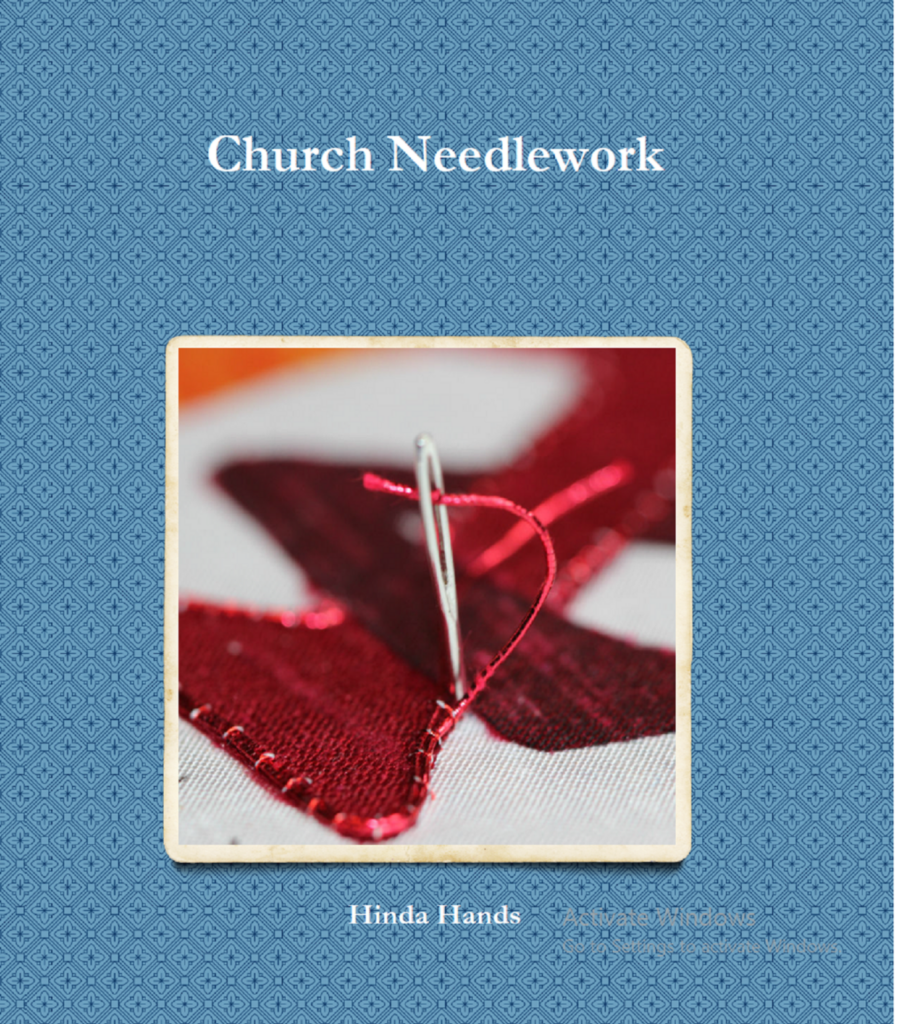 Four hours later, I woke with a start. Panicked that Travis would be in the studio, I rose from my chair.

“Bless me, that’s a lot of snow,” I gasped, looking out into the still black morning and seeing the piles of
white fluff.

And then I remembered. Travis wasn’t coming in today.

Still, it would be wise to stay awake and alert to ensure no one came suddenly. I wandered into the main area, and—

Uttered a string of choice words.

The cat. How could I have been so careless and forgotten about the cat!

While I’d snoozed, the creature had decided to entertain itself with the plethora of tassels hanging off
the ends of an ecclesiastical item called a stole. There were at least seven, if not more, stoles that were
close to ruined! 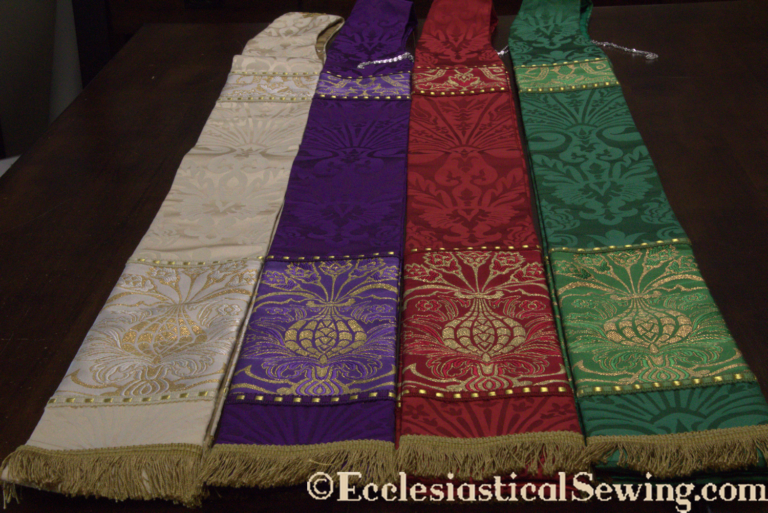 “Bad kitty!” I whined, sinking to my knees. I couldn’t fix this. My sewing skills were limited to buttons. “What am I going to do?”

The cat sashayed over to me, and wove around my body, before hopping onto my lap. I found myself
stroking its sleek back and with a shake of my head, I stared helplessly at the mess before me.

From high above my head, a voice called down in bright, cheery tones, “I can help you fix those.”

***
It is a truth universally acknowledged, that after a shop closes for the night, the mannequins come to
life. And if one only knows how to watch, their antics can be seen and thus recorded.
Note from Ecclesiastical Sewing: This is a work of fiction. While places and events might have some link
to real life, this is intended as a humorous piece for entertainment.
Meet Martin the Mannequin! After being purchased from a fashion gallery, Martin was unwittingly
shipped to Northern Minnesota to be used at Ecclesiastical Sewing as a fashion form to try on vestments.
Not a fan of the cold nor the ‘small town vibes’ Martin struggles to adapt to his new job as fashion form
for the sewing studio. Read along to catch the latest adventure!
Soli Deo Gloria.