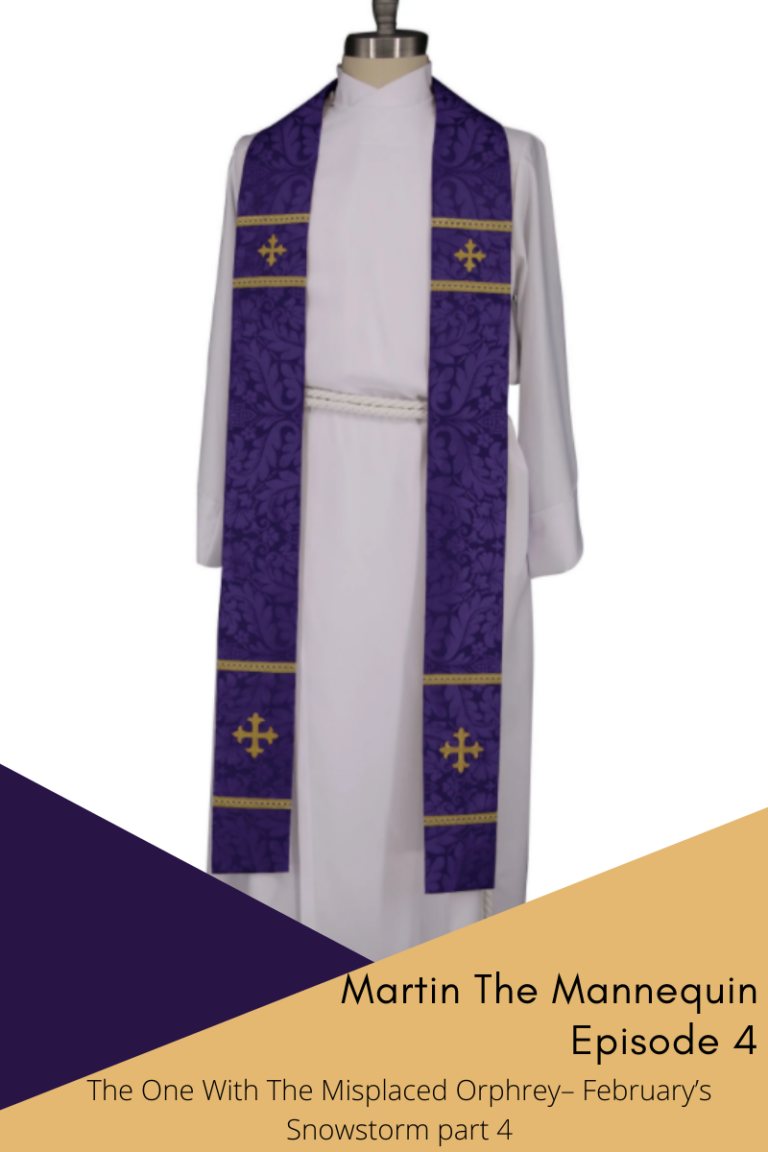 I should have grabbed the random red coat that was hanging in the hall at the studio. Sure it was cut for a female and Carrie only had it in case of winter emergency. It would have been a cape on my shoulders, but it would’ve been better than my current predicament. The linen garment I wore—I think its name was alb—was not meant for this weather. In the gloom cast from the heavily overcast night sky, it seemed as if the cat in my arms and I were the only two beings out in the winter madness.

There was no flash of headlights out on highway 371, not that I could have seen them if there were. But I headed south to the next building. Ducking under the alcove, I finally escaped the worst of the storm. I tapped on the glass and waited. Tapping a second time, and I saw a peep of a mannequin.

Our eyes met and I swore my canvas heart beat double.

She was extraordinary. Realizing I was one of her kind and not human, she approached. And stole the winter breath from my lungs. With the simple country girl charm that was so rare on the runways of fashion week, the mannequin who approached could have blown all the other haute couture ladies out of the water.

She approached and unlocked the door. “Sorry, we thought you were a human,” she exclaimed, pushing the door open.

“Quite alright,” I said. “I have it on good authority this little cutie is yours?”

“Nightingale!” the female said, her cry echoed from several other voices.

How many ladies were here? I did a quick count and gaped. A dozen female mannequins, two girlish in figure, all rushed to the front of the store. Boho-chic was right. But the prices were standard for a boutique. The dress the first female was wearing was mauve and florally, very lovely.

“I’m Martin,” I said, handing the cat to the first lady, who was just a little prettier than the rest.

“Kathy,” she responded, more focused on the cat than me.

“I’m your new neighbor,” I tried again, my words barely cutting through the gaggle of voices. All the female mannequins crowed forward to see the cat. “From Ecclesiastical Sewing.”

“Charmed.” Someone piped up, and a hand was stuck in my face.

“Well, thanks for bringing her by,” someone else cooed.

“Yes,” Kathy agreed, finally lifting her gaze to look at me. “Thank you, Martin. Maybe when this snow melts, we can bring you over some cookies. Our way of saying thank you for taking care of our little Nightingale.”

My immediate response was that I hoped I was long gone. But no use burdening this short conversation with the woes of my current state of affairs. “Stop over when you can.”

With that, I slipped back into the storm. This time, however, I barely felt the cold as I trudged back to the studio. As I came in, I stamped my feet dry.

“Oh, dear. Oh, dear, oh, dear!” Timothy tutted. “You’ve soaked the linen alb. We’ll have to treat it and get it dried, so Carrie doesn’t notice.” 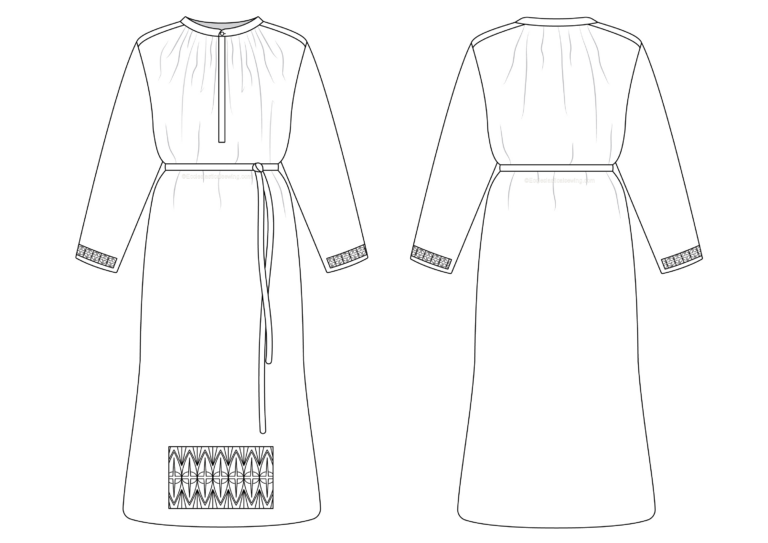 I proceeded to grab a blanket, which I wrapped around my torso when the alb was removed.

“I’ll fix that alb up, you keep pinning the orphrey on that frontal,” Timothy tittered, pointing at the table.

I approached, and blanched. “I don’t know much about sewing.”

“Well, it’s high time you learned.” Timothy called from the bathroom, where the tap was already running.

“Say, Tim—can I call you Tim?” I crossed my arms, staring down at the fabric. 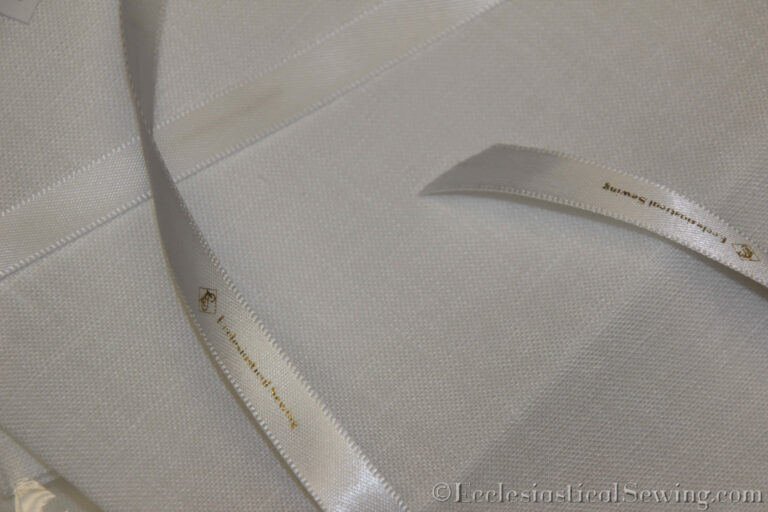 When the house elf shouted back in the affirmative, I proceeded to explain my situation—how I hoped to find a job outside of Minnesota. “And so…I hope to be leaving.” I finished.

Timothy scurried out of the bathroom, the washed linen alb in his hand and he placed it over a chair with three of the area heaters turned on full blast. I watched curiously as the house elf ran extension cords all across the room. When he caught me looking, he explained, “They’ll blow a fuse if we have them all plugged in too close together.”

“Alright, where were we,” Timothy said, as he hopped back onto the sewing counter and rubbed his little hands together. “You didn’t pin anything!”

“Look here, mannequin,” the house elf tapped his foot ferociously, “you aren’t leaving in the next 48 hours. The snowstorm isn’t letting you go anywhere. There is heaps of work to be done. So lend a hand and quit being a little pill.”

Not liking being called names, I obeyed and leaned back over the counter, proceeding to prick myself
more than the fabric as I attempted to pin.

“Oh, no, no…no.” Timothy came over and undid my five pitiful pins. “The pattern. Watch the pattern. That Carrie—she’s a sharp one. And I am too! This pattern on this fabric is all off. See here on this side—” he proceeded to point out details “—you need to do it like so.”

“Where are you going, anyhow?” Timothy asked, as he began to tack on some cross pieces of orphrey.

“Hopefully, somewhere with a beach.” I smiled wistfully at the fabric. “I adore the ocean. They took a truckload of us mannequins to a fashion show in Tampa once.”

Timothy snorted. “The ocean is overrated. You’ve yet to see the 11,842 lakes we have in Minnesota.”

I rolled my eyes and attempted to pin. “We’ll see.”

As the snow dumped from the sky, Tim continued to boss me around. I was almost relieved when the door clicked Wednesday morning and Travis came lumbering in to get the machines up and running.

THE FEBRUARY SNOWSTORM IS CONCLUDED, THANK YOU FOR READING. FOR MORE OF MARTIN’S ADVENTURES, STAY TUNED!

***
It is a truth universally acknowledged, that after a shop closes for the night, the mannequins comes to
life. And if one only knows how to watch, their antics can be seen and thus recorded.
Note from Ecclesiastical Sewing: This is a work of fiction. While places and events might have some link
to real life, this is intended as a humorous piece for entertainment.
Meet Martin the Mannequin! After being purchased from a fashion gallery, Martin was unwittingly
shipped to Northern Minnesota to be used at Ecclesiastical Sewing as a fashion form to try on vestments.
Not a fan of the cold nor the ‘small town vibes’ Martin struggles to adapt to his new job as fashion form
for the sewing studio. Read along to catch the latest adventure!
Soli Deo Gloria.