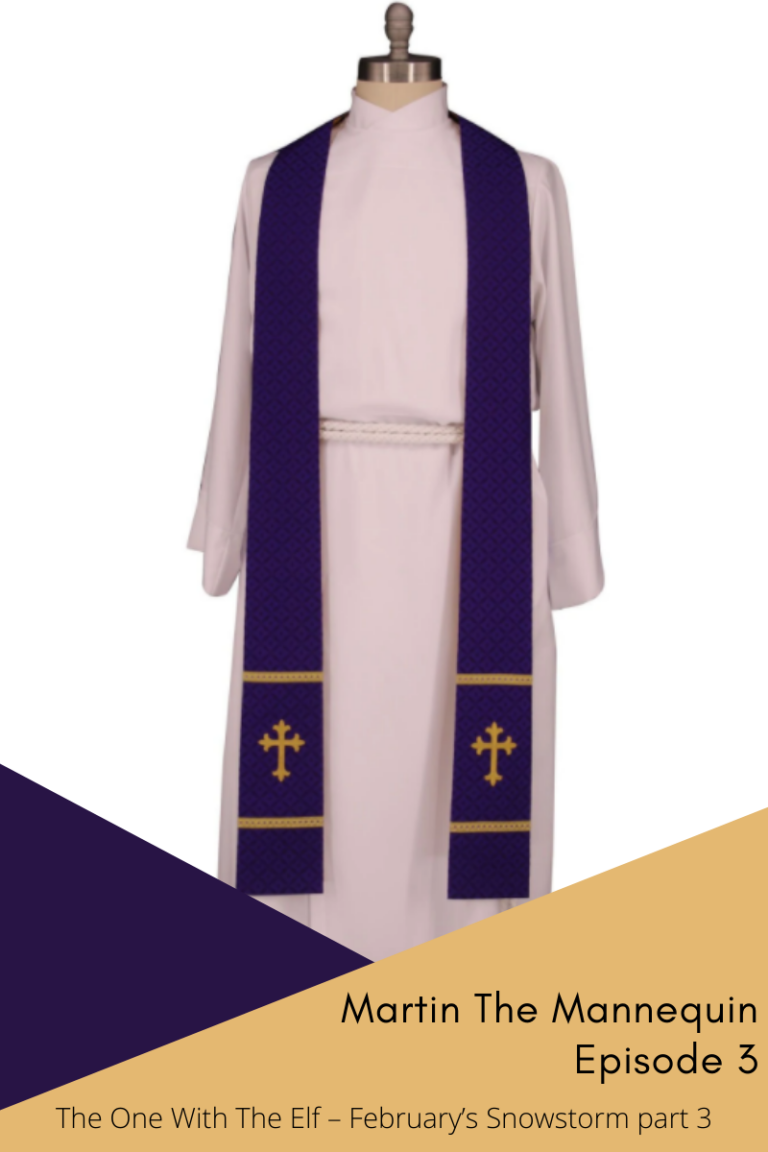 Perched in the rafters, shiny onyx boots on his dangling feet, a little house elf peered down at me. I sat back on my haunches, considering him. “How long have you been watching me?” I asked, knowing that he must have an access point way up there behind the sheetrock.

The cat meowed plaintively up at the elf.

“What are you doing in here?” I challenged, knowing that I could defend myself if I had to. But as a general rule, house elves were pacifists and abhorred confrontation. I hoped that maxim proved true in this case. Since I was planning on leaving this small, middle of the woods town as soon as possible, I didn’t want the magical community up in arms at me.

“I happen to work here,” the elf shot back. He puffed his little chest, before leaping to his feet. Nimbly he hopped from rafter to rafter. On the south wall, where the metal bars hung suspended to hold the banners, pulpit falls, lectern falls, and frontals hung, the elf climbed down from the ceiling. “So glad they put these bars here. It was quite the feat to climb up the window ledges and jump into the rafters.” 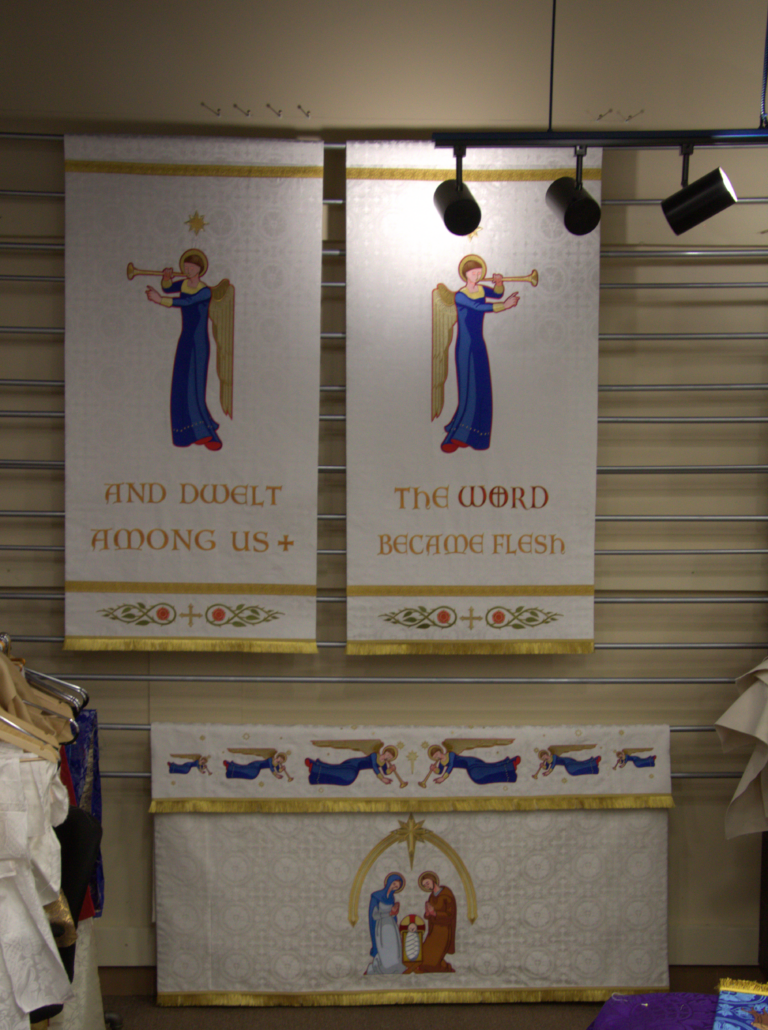 Without waiting for me to accept his original offer, the elf proceeded to open a few drawers, collect items off counters, and bustle about the room.
Ignoring his comment, I observed coolly, “I’ve never seen you here before.”

“You’ve been here all of what, two days now?” the elf tutted. “I’ve been on sabbatical.”

Joining the cat and me, the elf set out his supplies. “We’ll tack the tassels back on the stoles, and put stitches in to keep them from unraveling. Then…we’ll replace the ones that are beyond repair.” 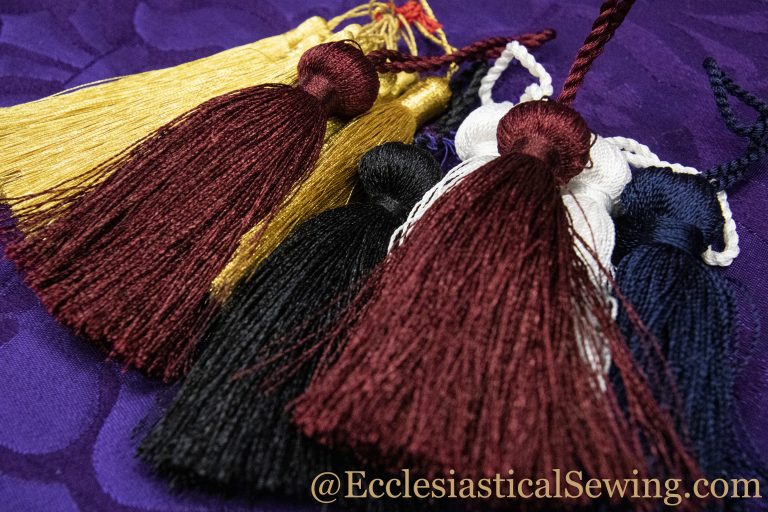 “Won’t Carrie notice her inventory is off?” I asked, more to prevent possible pitfalls than to challenge the offer of help.

“If it was something other than tassels, possibly. But there are many tassels in her current supply which are already unraveling—they’re such delicate notions.” The elf’s nimble fingers never stilled as he lined up the damaged pieces on one side and the undamaged on the other. Tutting and fussing, he worked as he spoke. “As I’m sure you noticed, humans rarely see what’s right in front of them. How else do you explain the fact that the majority of the human populace don’t know mannequins come alive
when the shops close for the night.”

“The top designers know we are animated,” I muttered under my breath.

“Well of course they do.” The elf shot me a glare as if to accuse me of being slightly slow in the head.

“It’s part of the deal certain humans have with their magical counter parts. House elves, in particular, have a rich history of helping tailors and seamstresses.”

“That’s true enough,” I agreed. “Have you and Carrie formally met, then?”

“Nope! I’ve not yet had the pleasure, but I look forward to meeting the delightful lady, ” crooned the elf. “Now that she’s got a new mannequin, I thought I’d introduce myself to you at least. I’m Timothy, by the way. Timothy Dens.”

“Pleasure to meet you, Timothy,” I said, extending my hand to shake his. I intended to leave Minnesota as soon as possible, but politeness was always in currencies, even here. “I’m Martin.”

I snorted. “I was named after Saint Martin of Tours.”

“You’re French, then?” Timothy completed his eighth stole and began tacking the wayward tassels that were hopeless unraveled. Even the worst of the mess didn’t faze the elf.

“Ah, well. My parents were French as well. My whole family was as a matter of fact. Have you heard of Jeanne Lanvin.”

“The Jeanne Lanvin?” I breathed.

I gaped at the little fellow sitting before me. “And you’re…you’re his descendant?” I stammered.

“Wow.” I was completely taken aback. “What are you doing here? In the middle of the wintery woods?”

By this time, all the stoles were fixed. Timothy gestured to them. “Please put these back, while I mend these. Most aren’t that broken. It seems your feline guest isn’t as destructive as we originally thought.”

“She’s not mine,” I muttered, scooping up the stoles and proceeding to hang them.

“Oh, dear, no. goodness me!” the elf scampered over to where I was working. He pointed to the rack and then to the stoles in my hand. “Those are quick ship vestments. Please put them back over there.”

I blinked at him and pursed my lips. “And what are these here? These are the same style with the rose brocade.”

“Right, good observation, but these are for sets that are not yet completed.” Timothy tugged at the hem of the robe I wore. “Come on now, be quick about it.”

As if I was going to stand here and be bossed by an elf. I wasn’t a common laborer! But apparently, Timothy wasn’t taking ‘no’ for an answer. So I bit my tongue and did as I was told. I’d always admired these vestments. Such skill in the craftsmanship, and yet the embroideries were rich with symbols I didn’t understand the meanings of. The crosses, sure. But the rest…a pelican on the purple stole? Odd. Very odd. But who was I to challenge the sewing world. There was always a reason for everything. 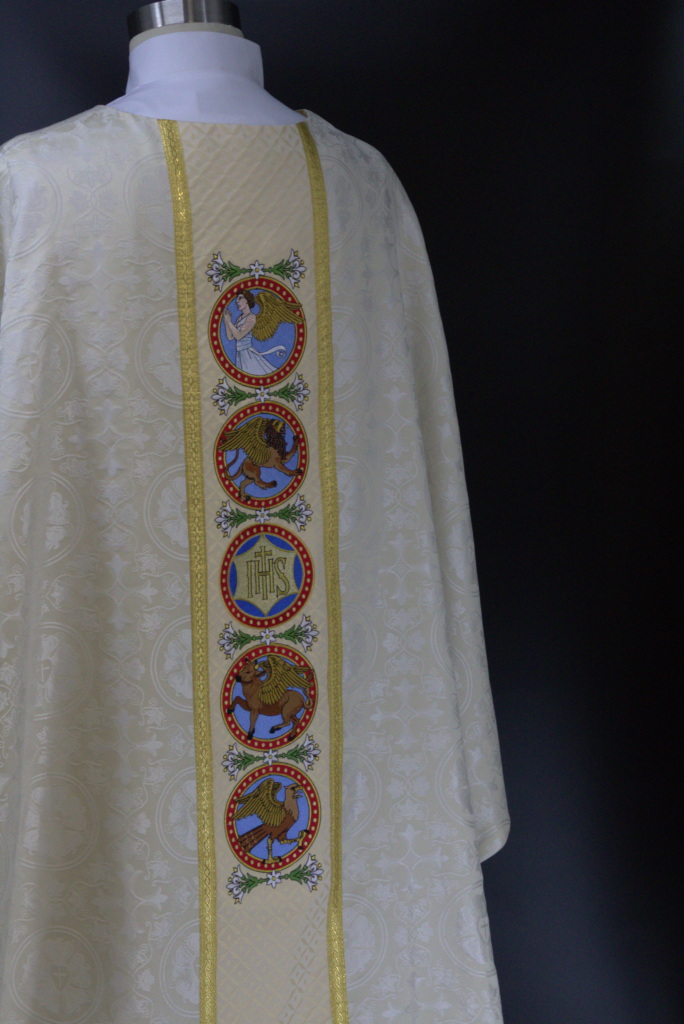 “The snow isn’t going to let up, but you can still take the cat back to the Arbor Boutique.” Timothy called out from where he was digging through a cabinet.

“Begging your pardon?” I responded.

“Nightingale? She belongs to the little shop at the north end of the building next to this. It’s a little boho-chic clothing store. I can’t believe the owner left her there when the snow was in the forecast.”

Truthfully, I’d been hoping to keep the creature. She’d been pleasant to have around—all of the few hours she’d been here. “I suppose the fur would get on the vestments and Carrie wouldn’t like having an animal in the building,” I lamented.

“Exactly,” Timothy agreed, rolling out a bolt of bright white fabric. “No pets in the studio. Carrie has border collies, and when this business was in her basement and her daughter and son-in-law’s basement, the dogs were all kept out. Still…fur isn’t fashion’s friend.”

“Alright, I’ll take her back.” I scooped the cat into my arms and unlocked the door.

“Tell the girls at the Arbor Boutique that I say ‘hi’,” Timothy laughed from the back of the fabric shelf. I scrunched my brow at him, but decided I’d figure out what he was talking about soon enough. I pushed open the door and stepped into the blast of winter.
TO BE CONTINUED…

***
It is a truth universally acknowledged, that after a shop closes for the night, the mannequins comes to
life. And if one only knows how to watch, their antics can be seen and thus recorded.
Note from Ecclesiastical Sewing: This is a work of fiction. While places and events might have some link
to real life, this is intended as a humorous piece for entertainment.
Meet Martin the Mannequin! After being purchased from a fashion gallery, Martin was unwittingly
shipped to Northern Minnesota to be used at Ecclesiastical Sewing as a fashion form to try on vestments.
Not a fan of the cold nor the ‘small town vibes’ Martin struggles to adapt to his new job as fashion form
for the sewing studio. Read along to catch the latest adventure!
Soli Deo Gloria.