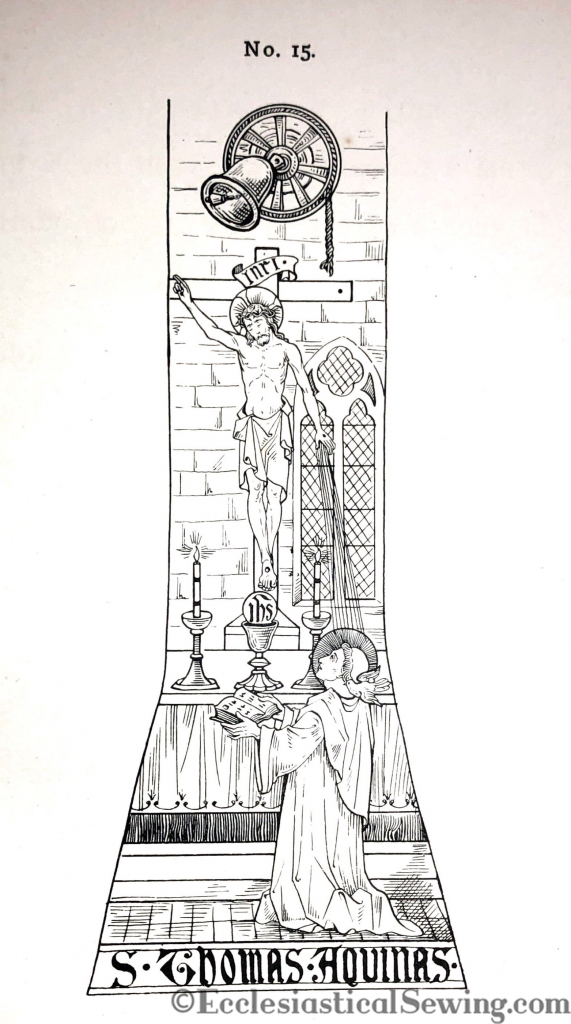 Thomas Aquinas is universally known as one of the greatest teachers and writers within the Catholic tradition. Canonized by the Catholic church in 1323, Saint Thomas Aquinas is most well known as a theologian with two specific masterpieces, the Summa Contra Gentiles and the Summa Theologiae. He was also well known as a poet, penning several eucharistic hymns. Considered the greatest of the Scholastic philosophers, Thomas’ writings provided a comprehensive synthesis of Christian theology and Aristotelian philosophy. His theology and philosophical writings, later identified as Thomism by his followers, influenced Roman Catholic doctrine for centuries even being adopted as the official philosophy of the church in 1917.

Thomas Aquinas was born in 1225 in a hilltop castle in Roccasecca in modern day Italy. In 1225 Roccasecca sat on a boundary that was frequently disputed by the emperor and the pope. Thomas’ parents owned a modest feudal domain which was very close to Monte Cassino, the Benedictine Abbey. The 11th and 12th century were a golden age for Monte Cassino as it acquired a large territory, built fortified castles and served as a starting location for many monks, bishops and cardinals. Thomas was sent to Monte Cassino at the age of 5 to begin his studies. Monte Cassino was similar to other monastic schools during that time period. Subjects and studies were of the liberal arts nature focusing on grammar, rhetoric and logic as well as hard science studies focused on arithmetic, geometry, music and astronomy. At some point, the monastery became a battle site, so Thomas was sent by his family to the University of Naples.

It was here where Thomas first discovered the order of preachers known as Dominicans. Thomas’ parents likely had hoped he would someday become an abbot, or head of an abbey of monks, no doubt to their monetary advantage. However, the order of Dominicans, very new at the time, leaned much more towards a vow of poverty style. Thus, while on the road to Paris, to continue his studies, Thomas’ parents had him abducted and held by his brother for a year. Thomas held out against his parent’s ideals as they ultimately released him to travel on to Paris to study with the Dominicans at the convent of Saint-Jacques.

Thomas continued his studies in Paris with Albert the Great, a well-known scholar of that time. While in Paris, teenage boys focused on the faculty of arts culminating in the attainment of a Master of Arts at about the age of 20.  After completion of a Master of Arts, most students could continue forward to study law, medicine or theology. Thomas chose theology and entered his theological program in Paris. This program was likely a difficult one with the master’s often obtained in the early thirties. He became a Master and occupied a Dominican Chair in the Faculty of Theology for three years. The next ten years of his life were spent throughout Italy, traveling with the mobile Papal court and eventually ending up in Rome. He was eventually called back to Paris and then traveled on the spend three years in Naples. In 1274, he fell ill and died on March 7th on his way to the Council of Lyon.

Thomas Aquinas is one of the great teachers of the medieval Catholic Church and is honored with the titles of Angelic Doctor and Doctor of the Church. He is also considered the preeminent spokesman of the Catholic tradition of reason and divine revelation. In modern times he is considered a theologian as well as a scholastic philosopher. Thomas, however, would never have considered himself a philosopher as he often criticized and clashed with philosophers, specifically Aristotle, who he considered pagans who had fallen short of the true wisdom of Christian revelation. Thomas’ derision of philosophers is best shown in his writings where he often referred to Aristotle simply as “the Philosopher”.

His greatest contribution to the Catholic church were his writings, specifically his two greatest writings the Summa Contra Gentiles and his unfinished Summa Theologiae. In the Summa Contra Gentiles, Thomas engages with unbelievers by providing arguments for the existence of God and for the foundation of Christian faith over other worldviews. The Summa Theologiae was more valuable for later church history as it covered a myriad of subjects ranging from questions of sex, the existence of angels, salvation, and the function of civil government. Ultimately his Summa Theologiae would be left uncompleted as he stopped working on it in December of 1273 citing that, “I cannot go on…All that I have written seems to me like so much straw compared to what I have seen and what has been revealed to me.” Thomas would die four months later.

Because of his position as a philosopher and theologian within the Catholic Church, numerous churches, universities and academy’s have been named in his honor over the years. The oldest and most well-known of them is the Pontifical University of Saint Thomas, also known as the Angelicum, located in the historic center of Rome, Italy. The university itself predates Thomas Aquinas but is named for him due to his work with several other Masters in the development of a program of studies for novices and lectors at the university in 1259. Numerous other colleges, churches and high schools bear the name of Thomas Aquinas throughout the world in places like North America, Australia, The Philippines, and Colombia.

Thomas Aquinas also appears in several famous works of art.  Housed in the Museum of Fine Arts of Seville, Thomas Aquinas appears, along with the other four Doctors of the Church, in a painting by Francisco de Zurbaran entitled the “The Apotheosis of Saint Thomas Aquinas”. He also appears in a painting by Antoine Nicola that was on display at the Notre Dame Cathedral at the time of the recent fire. Because he was a Dominican, most portraits show him in the black and white habit typical for that order. Other symbols that are often representative of Thomas Aquinas include a chalice, monstrance (receptacle for the host), an ox and a sun. Thomas was a very big man for his time with an often kind and humble manner. He was also very quiet early on in his studies and this trait earned him the unwelcome nickname of an ox by many fellow students who thought he might be ignorant because he was not very talkative. These thoughts were soon dispelled as Thomas began to speak and preach eventually showing his classmates and teachers that he was in fact extremely wise and pious.

The end of January marks the feast day of Saint Thomas Aquinas, specifically on January 28th. This is a day to celebrate the life and legacy of Thomas Aquinas, the noted doctor of the Church and patron of all universities and students. This is a great day to also reflect on the teachings, piety and ultimate devotion that Thomas Aquinas had for his faith and the Church.